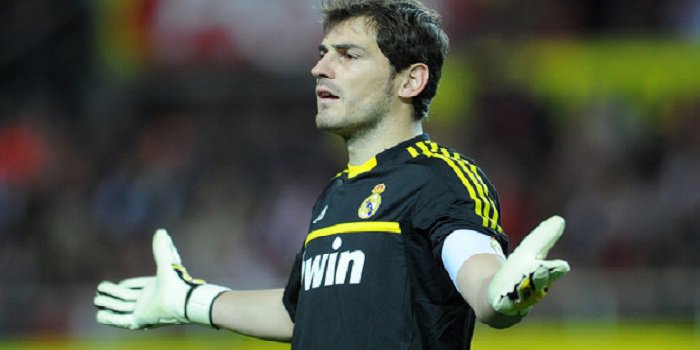 The media believes that Real Madrid has reached an agreement with both Manchester United and David De Gea to sign the young goalkeeper.

Iker Casillas has been in a weird situation at Real Madrid ever since José Mourinho has left him on the bench after his injury. The Spanish legend was not allowed to prove he has come back as the club signed Diego Lopez in his place.

Carlo Ancelotti trusted him again, playing him in the Copa del Rey and the Champions League in the season 2013-2014. The team won both titles. However, he was obviously not at his best form, which resulted in certain supporters of the Bernabeu stadium were booing and whistling at him.

Iker Casillas has been rumoured to leave the club for years

Iker Casillas has been with the club all his life

The Spanish goalie is a target of many transfer rumours ever since Mourinho benched him for the first time. Even though the fact that according to Spanish gambling news, Casillas has made several statements, according to which he would never play for a club that would have the slightest chance to play against Real Madrid.

In addition, he added that he can only imagine his place at the Royal Club and wants to retire from his city, from his team. Where he was born and raised, where he became who he is today: the captain and a legend of the world’s most successful club and the Spanish national team.

Yet, he becomes the main character of many transfer rumours. The English press believes that Arsene Wenger would love to see the Spaniard in his team, but AS Monaco and AC Milan are also among the favourite clubs to sign him. Moreover, some believe he will continue in the United States, to play for an MLS team.

That seems to be the only available option for Casillas if he ever decided to leave his team. He would have no chance to play against his beloved team, and he could even play with his friends such as David Villa or Raúl, who are playing for New York City and New York Cosmos respectively.

However, it is quite obvious to see that Iker Casillas is not at his peek anymore and has been playing in declining form. He is still a legendary player, but to be honest, he is not one of the best goalkeepers of the world any longer. And his supporters can see that, and his team can see that.

That is why Real Madrid purchased the World Cup’s and La Liga’s best goalkeeper, Keylor Navas. The Costa Rican player was believed to be able to take San Iker’s place in the starting line-up, however he was forced to the bench and got less chance to prove his skills than many would have believed.

And rumours about Real Madrid searching for a replacement for their legendary team captain has not stopped this summer either. online gambling sites in Spain kept writing about the potential transfers for the Galacticos. Names such as Petr Cech, Thibaut Courtois, Pepe Reina, Kiko Casilla and Hugo Lloris arose.

The list of names of potential signings went on and on and on, until the Spanish media has finally found the perfect choice for being the replacement of Iker Casillas. David De Gea is Spanish, young, talented, incredibly skilled which he has already proved and he is a top class player at a great club, in a strong league.

David De Gea is believed to be ready to sign for European club football’s top team. His contract expires in the summer of 2016 so Manchester United will not be able to make a fortune of their world class goalkeeper, and if they insist on a better price, they might have to let him go for free in the next summer transfer.

Mobile betting sites in Spain believe that the agreement is already done and only the English club’s approval is what is missing to make the deal come true. De Gea was offered an incredible contract with a salary of a weekly GBP 200,000, but the 24-year-old refused because he wants to go back to Spain, where his family lives.

Meanwhile, online bookmakers and internet casinos believe that Real Madrid’s new manager, Rafael Benítez refuses to enter into a possible soap opera by having to choose between the two Spanish keepers. They believe the manager will solve the problem by selling the club legend, to make room for the newbie.

It is still unknown whether Casillas would like to stay at Real Madrid and be number 2 goalkeeper of the club after 16 years of service upon purchasing his national teammate, or he would prefer leaving if that happens. What’s for sure is if he decides to go, a long list of teams will try to buy him immediately.