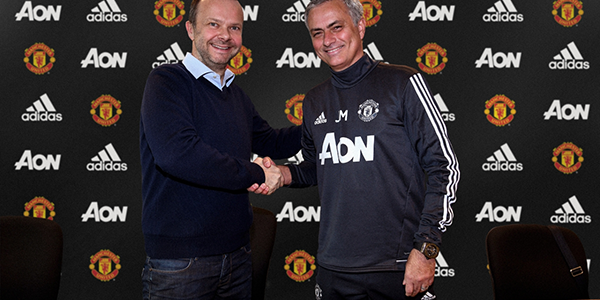 Old Trafford boss Jose Mourinho has put pen to paper on a contract extension with Man United that runs until the end of the 2019/20 season with an option for a further year, according to online sportsbook news. The club’s hierarchy has decided to offer the Portuguese manager a fresh deal, after he guided Man United to three trophies in his first season. Currently they’re in second position on the table, and more importantly Mourinho is perhaps the only man at the moment that can usurp Guardiola’s plans with Man City.

Great success with the Red Devils

After taking over the from Louis van Gaal in the summer of 2016, Mourinho won his first trophy with Man United by defeating Leicester City and lifting the FA Community Shield ahead of the 2016/17 campaign. He then went on to clinch the EDL Cup, before ending the season with what was the most important trophy – the Europa League title. Since they finished 5th in the Premier League that year, a Europa League victory allowed them to qualify for the Champions League the subsequent season – a achievement that was highlighted by Man United chief executive Ed Woodward.

“Jose has already achieved a great deal as Manchester United manager and I am delighted that he has agreed to extend his commitment until at least 2020,”  said Woodward.

The Special One highlighted his joy at signing the new deal, and stressed it shows great confidence in him by the chief exec and the club’s owners as they look to win even more trophies in the coming years with him in the dugout.

“I am really honoured and proud to be Manchester United manager,” the Special One commented. “I would like to say a big thank you to the owners and to Mr. Woodward for the recognition of my hard work and dedication. I am delighted they feel and trust that I am the right manager for this great club for the foreseeable future.”

This season won’t see Man United win the league, however the next one might…

Man City – aka the “noisy neighbours” as former manager Sir Alex Ferguson has labelled them – have been firing on all cylinders this season and they’re the favourites to lift the title, per online sportsbooks in UK. After 24 games in the English top flight, Pep Guardiola’s men are 12 points clear off second-placed Mourinho’s side, who have collected 53 points until this stage of the campaign. With the way Man City have been playing this season, Man United probably won’t be able to catch up with their crosstown rivals to mount a serious challenge to the Premier League title.

The Red Devils will next travel to London on Wednesday (Jan. 31) to face Tottenham in the league, but we predict this to be a tough battle for both sides. Man United have won 3 straight games in the last 5 encounters, while Spurs maintain the same record over the same period, with 3 wins and 2 draws, however they find themselves in 5th position with 45 points. Mauricio Pochettino’s men have lost the form that they enjoyed last season, so we’re willing to bet on Man United getting the better of them in round 25 during the upcoming midweek action.