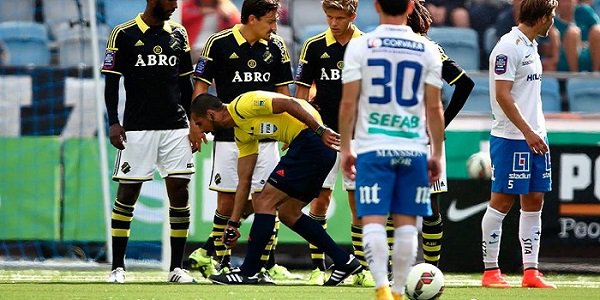 For better or worse the ubiquity of Facebook is undeniable and Mohammed Al-Hakim, a top flight Swedish referee, has begun his own page in order to both explain the decisions he’s made on the pitch and to encourage others to go into football officiating.

My somewhat unfashionable objections to Facebook stem from the fact it was originally funded by DARPA (The Defense Advanced Research Projects Agency) and is, at it’s very core, a method by which people spy on themselves and reveal their activities and routines to the authorities without the authorities having to spend lots of money on surveillance. DARPA say it merely uses data to polish it’s digital propaganda skills, which is like the NSA saying they only recorded all your emails to practice cut-&-paste.

Swedish Refs Takes To The Net

The “hook” on Facebook is a direct play to our own view of self-worth. Facebook, in essence, takes your life and turns it into a computer game, providing easy statistical scores for each player. How many friends? How many posts? How many likes? If you’re not scoring high enough you’re not a winner. It has proved very effective. Twitter operates on much the same basis. It is a frightening indictment of us as a species we have so readily accepted this paradigm of being both consumer and product, both watchdog and quarry.

Surely Facebook is for friends and fun, and sparked by the genius of a college student

Swedish soccer referee Mohammed Al-Hakim has now joined this dubious “social media” club by starting a page on which he will explain and discuss his on-pitch decisions after the fact. He has almost certainly done this with the best of intentions. His stated aims being entirely laudable. Engagement between fans and football officials has always been woeful, and whilst this appears to try and address that imbalance, if you’re Swedish gambling laws of fair play apply on the internet, you’ll quickly see on his page that just isn’t so.

“There has been a lot of positive reaction,” said Al-Hakim, “but obviously there’s have been some negative voices.” Which has to go down as the understatement of the year so far. Refereeing will always attract criticism and the internet is a magnet for it already, so this really will be the perfect storm of trolls, haterz and those who thought so-and-so should have got a penalty in whatever instance Saturday’s match contained. Whatever he says to justify his decision one has to feel that perhaps Mohammed Al-Hakim displays just a little naivety of the internet.

“Most of all I want to increase the accessibility and the dialogue within the football family. I’ve had questions about a bit of everything so far.” Said Mohammed Al-Hakim, “I have enough self-awareness that if I have made a mistake I have no problem admitting it.” Which is lovely until the death threats start rolling in, which they almost certainly will. Just ask former Swedish referee Anders Frisk who resigned from officiating in 2005 after Chelsea fans got their teeth into him. He himself might not be bothered by the abusive comments, but the page won’t last if that’s all there is.

Haters and trolls will be cautioned once, presumably

“I have a responsibility to make the page interesting.” Mohammed Al-Hakim said, perhaps forgetting he’s a Swedish football league referee and not actually interesting in the first place, “but readers also have a responsibility to maintain a decent level in the discussion to keep it alive.” Which pretty much gives the page the life expectancy of a snowball in a flamethrower. “It feels like the positive side far outweighs the rests and that [the negative side] isn’t as visible.” He said perhaps gambling news coverage of his starting the page won’t draw in the dark-side of the net, which it certainly will.

The press gleefully report that over 3,000 people have already liked Mohammed Al Hakim’s page, a number that will almost certainly increase, but does that actually mean he’s engaging with 3,000 football fans? The wedge driven between fans and officials, which of course hasn’t been helped by Sepp Blatter’s criminal fraternity of freeloaders, is mostly a technological one. With modern high-speed cameras and big screen replays the fans often have more information within seconds than the referee did to make his decision.

Footballing authorities have been steadfast in their refusal to offer referees this facility when it comes to the trickier decisions. A position that grows more stupid with each passing controversial call. Remove this ridiculous technophobia and referees would make fewer bad calls and fans would be far better disposed towards them and there would be no need for individual refs like Mohammed Al-Hakim to take to the internet and defend their inability to do their job properly. Not that he can entirely anyway.

UEFA have rules that prevent referees discussing European games he’s involved in, which means those of you that like to bet on sports in Sweden on sites like Bet365 won’t be able to call him out if he makes a pig’s ear of any of those games. Apparently whilst engaging with the “football family” is Mohammed Al-Hakim’s stated aim there will still be somethings on which he can’t speak, which rather means his attempts are almost certainly doomed from the start, but be warned little critical internet football fans, just because he can’t respond, doesn’t mean the authorities won’t.