Nationalism In Sport Or Sport In Nationalism? Finland Frets

News >Nationalism In Sport Or Sport In Nationalism? Finland Frets 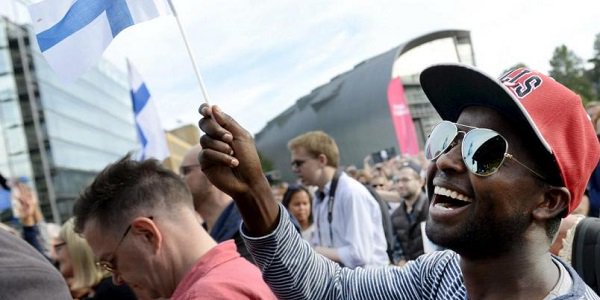 Nationalism in sport is to be expected, the use of sport and its connotations by nationalism, however has only been tried a few times and Jesse Owens proved it never ends well. This time it’s the Finns who’ve decided to make use of national team pride as a lure for the frightened to the nationalist causes that rail against the increased amount of immigration that the wars in the Middle East have created. This too will not end well.

The ugly face of nationalism, sadly the only one it possesses, rears its head all too often in sport at the international level. England can’t play Germany at football without someone mentioning World War II, American fans of any sport at all tend to chant “U.S.A. U.S.A. U.S.A.” in an overly hostile manner as if attempting to breach the walls of Jericho with sonic vibrations, and even the genteel world of Cricket has seen fans assail opposing nation’s players with beer bottles, golf balls and fruit.

As a well-known tribal phenomenon I’m gambling news that some people get a little carried away with a need to feel a sense of communal identity isn’t going to shock you. That some of these are sports fans, even less so. It is difficult to host an international fixture of any ilk without invoking some spirit of nationalism in sport, it is, after all one country vs another, however the degree to which some allow this to define themselves is really quite primitive.

There’s nothing wrong with pride in one’s country, it’s when that elicits an unjustifiable sense of superiority over other nations and a need to tell everyone or prove it that it all becomes a bit pathetic. However the issue that has surfaced this week is not with nationalism in sport so much as it is with the use of sport by nationalism in a non-sporting context. There is not, in Finland at present, a need to keep politics out of sport, but to keep sport out of politics.

Nationalism In Sport Not The Problem

These hockey jerseys are demonstration of patriotism for these peoople

Those that like to bet on sports in Finland may have already noticed that their national ice hockey team has asked that Finnish nationalists protesting against immigration into Finland to stop wearing their team shirts saying; “Our message is that fan jerseys belong in the stands and not at demonstrations.” said Henna Malmberg from the Finnish Ice Hockey Association, Suomen Jääkiekkoliitto, which is a laudable sentiment, but is it likely to dissuade passionately nationalist Finns?

With Finland due to get 30,000 asylum seekers by the end of the year, mostly refugees from the war zones of Afghanistan, Iraq and Syria who have made their way to Europe on the basis it is shelled less often, contains far fewer death squads and doesn’t impose female slavery on anyone who doesn’t claim to be a “celeb” and demand a photo-spread in “Hello!” magazine. This number is way up on last year and some of the five and half million Finns are worried by the influx.

Protesters, that tend to gather on the Swedish border from where many of the asylum seekers arrive, have been wearing their ice hockey jerseys as a uniform of solidarity, but that isn’t nationalism in sport, it’s a perversion of sporting ethos. The team wishing to distance itself from its own fans saying far more about how unacceptable the protesters’ motives really are in this day and age. The team has never had a problem with nationalism in sport but this is a kidnapping of symbolism.

Diversion Tactics Of The Politically Moribund

There were hockey jerseys on people at the Swedish border too

Naturally the fear of immigrants, migrants, refugees and asylum seekers is dressed up by local politicians for their own purposes, nationalism in sport is almost automatic, but much of the political nationalism we see today is an invention of a political class devoid of answers or policy, presenting a threat that doesn’t really exist to people easily scared by a press only too happy to hate on those that don’t buy their papers, watch their channels or listen to their airwaves. Diversion tactics, nothing more.

The base flaw with nationalism as a whole is that it is a bit 1930s for the 21st century really. The internet doesn’t reside in any one place, across the world countries have banded together into trade or political unions, and if a couple of million people want to go somewhere lines on a map aren’t going to stop them. Razorwire, tear-gas and callous indifference to their plight might, but geography is sorely incapable of it, as recent events have proved. The world’s nations are no longer islands.

Those that take advantage of Finnish gambling laws to wager on their national ice hockey team at ComeOn! Sportsbook or any luxury casino they may happen to have to hand, true sports fans, will have no truck with this political assumption of ownership of the shirts, however there could well be blow-back from this that will see Finns not swept away by the fear of foreigners shy away from wearing the shirts now tainted by the protestors, and perhaps, just perhaps, nationalism in sport will fade just a little out of sheer embarrassment alone.