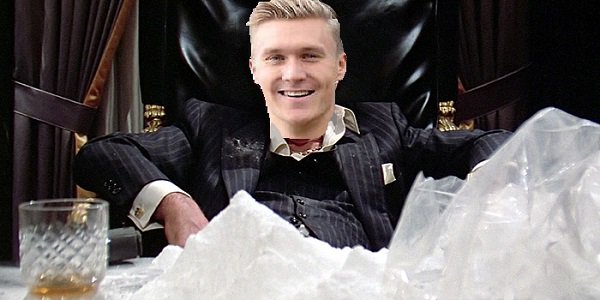 With another player coming forward to talk about drugs in sport you have to brace yourself for revelations that will destroy any faith you had in the teams’ sense of fair play, however Viktor Loov’s drug allegations seem to stem not from a want of a level skating rink but more from a kind of bewildered innocence, especially of how to behave in front of the press if you want to get on in the world.

Often those that like to bet on sports in Sweden or elsewhere worry about the effect drug abuse is having on the games they wager upon. Doping tests are mandatory, if a little haphazard, in ice hockey as in nearly every sport these days, the necessity underlining the existence of the problem, and its scale. That we can have faith in the results of league games and internationals having been won fairly is essential, but that we don’t miss one problem whilst eying another is just as important.

The duality of drugs in sport is that many successful athletes have been caught taking performance enhancers, and just have many have been caught using recreational drugs. The former are rightfully pilloried, as Lance Armstrong was, the latter tend to be a cause of momentary amusement before being vaguely forgiven of their sins, a la Ian Thorpe. This is less of an hypocrisy as at first it might appear but Viktor Loov’s drug allegations do point out what goes on beyond doping.

Viktor Loov is a 22 year old Swedish prospect for the Toronto Maple Leafs who recently probably did his prospects no favors whatsoever by rather naively failing to duck some tricky questions in an interview with a news outlet based in his home town of Sodertalje; LT. Perhaps a more experienced player would have been a little less direct in their answers, because Loov’s drug allegations are pretty insubstantial at best, and don’t actually involve drugs of a performance enhancing variety.

“In the NHL there is a lot of cocaine.” Viktor Loov’s drug allegations are nothing if not blunt, although what a 22 year old Swede defines as “a lot of cocaine” in any circumstances is open to question, let alone in a foreign hockey league. Despite this vague unsubstantiated anecdotal accusation being silly, the young man from Sodertalje then decided to be really stupid. “There is bound to be some in the AHL as well.” He continued with the self-destructive urge of a manic depressed lemming.

“Sure this is how the talk is,” replied Loov, “but I am certain it’s not just talk. There are players everywhere who do it. If you have money you probably have easy access. Then there is the attitude over there compared to Sweden. Not with cocaine maybe but with hash (cannabis) and stuff you smoke, that is something you encounter everywhere.” He continued perhaps gambling news of Loov’s drug allegations wouldn’t reach prospective team bosses in Toronto.

There must be tons of coke, how else would you explain this?

Not content with having basically told a journalist (of all people) that everyone in the NHL is coked up and stoned the entire time, the young Swede decided to continue by pointing out that a lot of players drink saying “It can be the evening before a game.” as if his poor ickle fwagile mind can’t handle the concept. Loov’s drug allegations, such as they are, read like innocence shocked as a rather dull 22 year old discovers some people enjoy the things mummy said were bad.

He’d had his problems with nosebleeds before he moved overseas

Loov’s drug allegations will not have pleased anyone in the NHL but he doesn’t believe they’re losing much sleep over the issue of recreational drugs in hockey. “They probably don’t want to talk about it, it’s doesn’t belong to sports to do stuff like that. But I have the feeling the NHL doesn’t take this seriously, they dont do much.” A point he then contradicted by saying “They do doping tests, I was tested like three times last season.” Which seems sufficient, doesn’t it?

There’s almost a tang of jealousy to Loov’s drug allegations as if he hadn’t been invited the cool parties and was still bitter about it. However what they do highlight is that there’s far more to drugs in sport than those being tested for and as role models players may have to re-examine their lifestyles, although of course many would point out it might just be best if young idiots like Loov kept their mouths shut. There may now be little chance to take advantage of Swedish gambling laws to bet on Loov at the Leafs on ComeOn! Sportsbook or the Golden Reef Casino, his lack of a decent press agent may well have scuppered those.