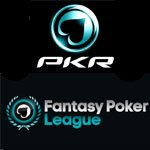 PKR is operating in full compliance with British gambling laws and is famous for its unique 3D effects filled poker client. Just in time for the start of this year’s Word Series of Poker (WSOP) the poker room launched a new fantasy app aimed at Facebook users.

The application allows the members of one of the most famous online poker sites in United Kingdom select their dream poker team on Facebook and advance it to the ultimate WSOP victory, while collecting cheers and encouragement from their friends on the social network site.

Members are offered $100 million virtual money to spend on the selected team putting it together is a league environment. Eight players can be selected for one team from a list of 180 best poker players in the world. The selected teams will be scored based on the finishing position in all 59 bracelet events.

United Kingdom gambling news report that PKR is even offering an array of prizes to further boost the competition including a new iPad for the overall winner of the league, which will be determined once the Main Event’s final table has been finalized. Other prizes include unique poker chip sets.

PKR Poker Community Manager, Dan Grant, commented: “Fantasy sports are all the rage, but the online poker world is lacking its own established WSOP equivalent. While poker’s biggest stars are making history in Vegas in the coming weeks, we’ll be following their progress even more closely and sharing in their success.”

He went on to add: “The Fantasy Poker League is our first Facebook app, and one that we hope thousands of players across the world will enjoy.”

PKR is currently enjoying over 40,000 users following them on Facebook, but that figure is expected to grow with the introduction of the new application.