New Jersey governor Christie is defying the federal ban on sports betting and seeks to proceed with its legalization in the state. 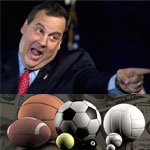 New Jersey governor, Christie, is a friend of gambling as the man understands that legal gambling produces tax revenues and protects the gamblers, while banning it doesn’t prevent betting and takes it underground.

Despite the fact that online sports betting in the United States is banned under the American gambling laws, the New Jersey government is seeking to authorize it within the state borders as early as October or November this year.

The sports betting would be allowed at state’s casinos and racetracks. As Christie stated: “We intend to go forward and allow sports gambling to happen, if someone wants to stop us, they’ll have to take action to stop us.” And the opposition is certainly there.

The legalization move is also expected to help Atlantic City casinos, New Jersey legislators’ cream puff, where the revenues are down 10%. Moreover, this is expected to happen at the expense of offshore sites that currently provide options to bet on sports for the United states residents.

In effect, New Jersey is following the footsteps of Nevada. Both states have positive experience with the gambling industry, which powers up the state coffers with taxes. New York is also trying to catch up with its southern competitor, New Jersey, while California is racing with Nevada.

At the same time, other states, such as Florida, seek ways to exterminate the last remnants of legal betting industry within their state borders.