Nominations Open for the Poker Hall of Fame

News >Nominations Open for the Poker Hall of Fame 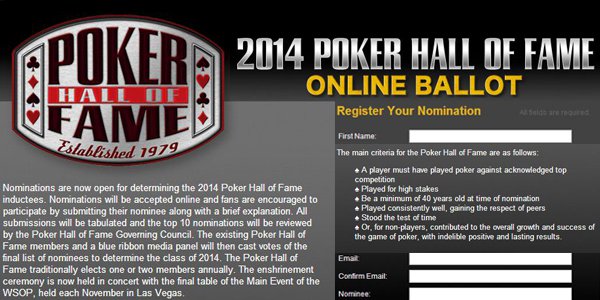 While you’re still feeling the buzz after the big poker tournament, WSOP is inviting you to nominate your favorite players for the Poker Hall of Fame.

The World Series of Poker (WSOP) has brought forward some new talents this year and while everyone is waiting for the final battle later in November, the organizers or the international tournament are inviting poker fans to a new challenge: nominations are now open for determining the 2014 Poker Hall of Fame inductees.

Fans are encouraged to submit their nominees online, adding a brief explanation of why they think he/she deserves a spot in the virtual hall. WSOP will then review the suggestions and pick the top 10 nominations, forwarding them to the Poker Hall of Fame Governing Council.

You may have seen or read about these professionals gathering in American poker rooms and playing for days in a row, to get their hands on the coveted WSOP bracelets and hundreds of thousands of dollars. Now you can pick your favorite and add his names to the list of nominees. If they meet the criteria, they have a shot at becoming poker legends.

Here are a few players who contributed to the game a lot and definitely deserve a place in the Hall of Fame:

The Canadian-Romanian player turned 40 on July 26th, so he just became eligible to be nominated for the first time in his career. Negreanu is the only player who holds two WSOP Player of the Year titles and has been a true role model for poker fans across the world.

Criteria for the Poker Hall of Fame

In order to qualify for the Poker Hall of Fame, it is essential for nominees to be at least 40 at the time of nomination and to have:

According to Hendonmob and their All Time Money List, the Canadian player is currently the biggest live tournament earner of all time, having won almost $29.8 million throughout his career. Six months ago he was only third, so this is a big step up that once again proves Negreanu deserves a spot in the Poker Hall of Fame.

The poker pro has won six WSOP bracelets, two World Poker Tour championship titles, and finished second in the Big One For One Drop tournament this year.

The American poker player is certainly one of the most popular faces out there, but he doesn’t have the best reputation. With a nickname like “The Mouth”, it’s pretty clear that Mike Matusow’s style is quite unpolished. The player is known for enjoying the occasional trash-talk at the poker table.

Another move that defines his “style” is playing well for hours or days in a row and then ruining it all in one final catastrophic move, which is how he got two other nicknames often used in gambling news: “Mike Matusow Blow-up” and “Mike Matusow Meltdown”.

He started off as a dealer, then got into the game in the 1990s. His professional record includes five WSOP bracelets and the 2005 World Series of Poker Tournament of Champions title. Throughout his career as a poker pro, Mike Matusow has earned more than $9 million.

Unlike “The Mouth”, Jennifer Harman is a well-known and respected professional, considered to be one of the best poker players in history. Her talent and skill have brought her two WSOP bracelets in open events, making her one of the only two women who have managed this performance.

Less than a decade ago, she was considered the greatest female poker player out there and her total tournament winnings exceed $2.7 million.

Once the nomination period is over, the top 10 players will be placed onto a short list. The Poker Hall of Fame Governing Council – consisting in Hall of Fame members and a blue ribbon media panel – will review the suggestions and cast their votes.

One or two members are chosen to join the virtual hall every year and everyone is eager to find out who will be the lucky ones to make it to the list in 2014. The enshrinement ceremony will be held during the November Nine, in Las Vegas.

If you have a favorite player who you want to nominate, click here.