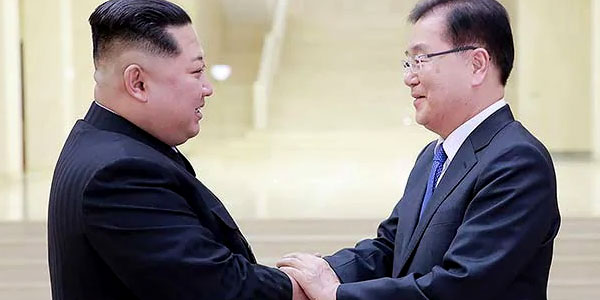 No doubt, the aspirations for a nuclear-free Korean peninsula and peace have been rising up in recent months. But is it premature to hope for more than 60-year divided peninsula to reunite after holding a couple of decisive summits? What kind of hurdles have to be overcome, for a reunification process to start wheeling? Is it worth placing a wager on prospects for reunification? Let us walk you through best online betting sites in South Korea, offering great betting odds on North Korean politics.

The idea of Korean reunification poses a threat to the survival of the Kim dynasty.

Less than eight years into the era of the 34-year-old despot, he has exerted power over all aspects of life in North Korea from the economy to the way people dress. The young dictator has attracted the world in an unprecedented way from bringing the peninsula on the brink of a destructive war into sending letters of hope for global peace and reunification of the Korean people on both sides of the DMZ line.

Yet some argue that regardless of the diplomatic games and cheerful summits, some hurdles require decades of joint work in order to bring North and South Korea together. For example, agrarian North Korea has a GDP less than 1% of the South, which is the world’s 11th biggest economy, boasting some of the top tech and engineering firms. Merging the two economies would wreak hardships many times worse than when East and West Germany united in 1990.

Others perceive the idea of Korean reunification poses a threat to the survival of the Kim dynasty. If the reunification takes the form of ‘one country, two systems’ similarly to how China and Hong Kong have, the internal control will be eased in North Korea, and that could fuel unrest against the Stalinist totalitarian system. Does that mean Korean reunification odds are far from being real?

Some economists do not see the situation that gloomy, and that is why the odds on North Korea politics betting are available at the best online betting sites in South Korea. According to US investment bank Goldman Sachs, reuniting North Korea that offers a large and cheap workforce and a wealth of minerals, with resource-poor South Korea could boost the peninsula to overtake France, Germany and possibly Japan in 30-40 years.

Reuniting North Korea that offers a large and cheap workforce and a wealth of minerals, with resource-poor South Korea could boost the peninsula

So, prospects for reunification are not at great distance as they seem to be. The odds are (1.07) for North and South Korea not to reunite before late of 2020, while the odds value at (7) for reunification to take place either this year or the next one, according to 1xBet Sportsbook. Do you think the cheerful summits will reunite the Korean peninsula?