Who deserves Nobel Peace Prize 2018? Online bookies have their guesses, and there is not much gratitude in that… 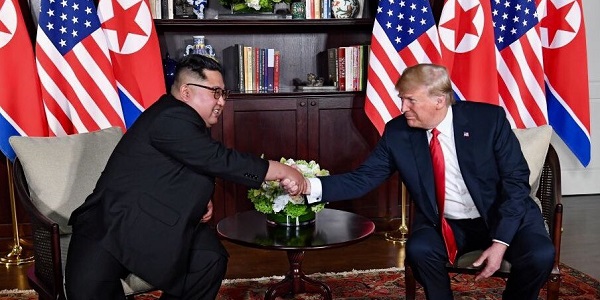 Many names might come to mind when talking about who deserves Nobel Peace Prize 2018.

Society is full of everyday heroes who do something epic every day, as part of their job. Most of the cases, they remain unknown and they are fine with it. In other cases, people do stupid things and become famous for it. In fact, they might even become popular for it. That’s what arrogant people call “politics done well”, but that’s a different story.

However, while such people have always been popular in politics, their names rarely came up when talking about who deserves Nobel Peace Prize 2018. Up until today. Online sportsbook news sites in the United Kingdom came up with some pretty shocking news who the most likely candidates to win Nobel Peace Prize 2018 are.

Kim Jong Un and Moon Jae In sat down to talk to each other and the result was the peace treaty. Does that mean they deserve Nobel Peace Prize 2018? Yes, according to the best online betting sites in the United Kingdom. They are the most likely candidates according to the bookies.

When talking about Kim Jong Un’s biggest rivals, it’s obvious that we must think of an American capitalist pig who takes advantage of less fortunate people and oppresses the majority. There are many competitions I can imagine these two as each other’s biggest rivals: who will destroy the world first, who will use nukes first, etc.

However, I could barely imagine Donald Trump competing Kim Jong Un in hopes of winning the Nobel Peace Prize. Yet 2018 is the year when that could actually happen, at least that’s what the online sportsbook directory says: the odds for Trump to win Nobel Peace Prize 2018 are 11.00, which makes him the second biggest favourite…

Nobel Peace Prizes usually come to those who rebel against oppressors and beat them against all odds. That’s what one could imagine and that’s how it should be, based on the name “peace.” Nevertheless, we’re living in reality and not in a fairy-tale, probably that’s why online sportsbook sites in the UK regard the former Catalan prime minister as an actual candidate for Nobel Peace Prize 2018.

On the one hand, he has been fighting for the freedom of Catalonia and the Catalans. He fought the Spanish oppressing power. He felt that the Catalan minority did not get enough respect from the Spanish government and hence he tried to gain them what he thought they deserved.

On the other hand, Catalonia has been doing just fine. They have autonomy, and they have much more rights than 99% of other minorities within the European Union. The Catalan prime minister basically declared a war on the Spanish constitution, which clearly states that Catalonia is a part of Spain and there can be no referendum questioning it.

But nationalistic views and political propaganda rarely care about things like that. I mean, things like morals, rule, laws, constitutions and stuff like that. Still, the odds for Carlos Puigdemond to win Nobel Peace Prize 2018 are 13.00. Who do you think deserves to win?