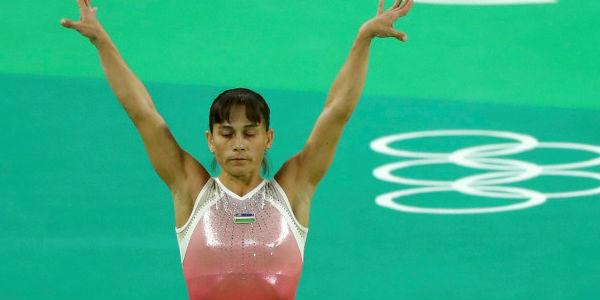 The age defying Oksana Chusovitina, oldest Olympic gymnast in Rio to fight for another Olympic medal.

Usually for athletes coming to their third or fourth Olympics it is said that those Games are probably the last in their career. Oksana Chusovitina is an exception of this unwritten rule. As sites dealing with internet betting sites in Germany note, the nowadays Uzbekistani gymnast, 41 years of age, is attending her seventh Olympic Games in Rio, being thus the oldest female Olympic gymnast in history.

• Oldest Olympic gymnast in history with 41 years of age

Here role on these Olympics is not only one of a mere participation. On the contrary she has great chances to participate on the women’s vault competition final. She already passed the qualification with a score 14,999, sufficient for the fifth place, demonstrating a world class performance even at the age of 41. People say about her that she is an age defying athlete. With her Rio 2016 performance, she convinced all of us that this is so.

From the Olympic Games in Barcelona in 1992 through Atlanta, Sydney, Athens, Beijing, London and Rio in 2016, Chusovitina defended the colors of three countries as well as of the Unified Team. Right after the fall of the Soviet Union in 1991, she was afraid that her career might soon come to an end, since Uzbekistan didn’t have the resources needed for providing gymnasts with sufficient training possibilities. Yet, the idea of Unified team, team formed of ex-Soviet athletes, was soon born and Oksana took place in the Unified gymnast team. This peculiar event, as online sportsbooks in Australia note, brought in the end the only Olympic golden medal to Chusovitina. The Unified gymnast team ended the Games in Barcelona on the first position, in front of the teams of Romania and the United States.

After the Games in Barcelona Chusovitina started competing for her native country Uzbekistan, representing it on the upcoming Olympics in Atlanta, Sydney and Athens. She won 5 medals on the World Championships for Uzbekistan, but unfortunately none on the Olympics. Yet, the world fame of the gymnast brought her a status of an “honored athlete in Uzbekistan”. Her popularity in the country was of such proportions that she was even being represented on an Uzbekistani postal stamp.

But life revealed new obstacles to Chusovitina over and over again. Soon after she became mother, her first and only child, Alisher, was diagnosed with leukemia. For a proper treatment she had to move to Germany and continue her career in the German national team. It was with Germany that she succeeded to win her first Olympic medal in individual category, 16 years after the gold with the Unified Team. At the vault competition in Beijing she ended the competition second, right behind Hong Un Jong from North Korea.

Yet, sometimes even Olympic medals can have no value in comparison to other things. Soon after the return from the Olympics in 2008 she received the news that her son in cancer-free: a news that brought her such a happiness and pride that no medal can ever bring.

In London, after being placed on the fifth place, she decided to quit her career. Yet, as sites dealing with bet on sports in Brazil note, the eternal fighter inside her didn’t quit. Unsatisfied from the placement she decided to prepare for yet another Olympic, the Rio spectacle. When asked by a reporter about why she changed her mind after London she simply answered: “because I am a women”.