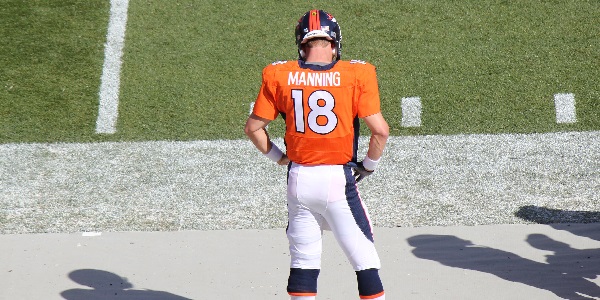 NFL legend Peyton Manning retires from football after collecting his second Super Bowl victory. The No. 18 spent eighteen years in the league, was elected as MVP five times and holds more than fifty quarterback career records.

The man that is widely considered as the best quarterback who ever played the game, finally calls it a career. Peyton Manning retires just weeks before his 40th birthday, finishing a legendary NFL career that earned him two Super Bowl victories and 14 Pro Bowl selections at two AFC franchises, the Indianapolis Colts and the Denver Broncos.

Manning had to become an NFL quarterback, but eventually he became the best

Coming out from Tennessee as a college superstar, Manning was a 1/1 draft selection back in 1998 by the Indianapolis Colts. Being the son of a legendary QB, Archie Manning, who played for the New Orleans Saints, the Houston Oilers and the Minnesota Vikings in a career that lasted for fourteen years, he was destined to become an NFL quarterback.

But he went way further than that and he ultimately became the Quarterback. He became the Sheriff who ruled the league, who played poker and chess with defenses and tore them apart. However, for a long part of his career he was seen as the best ever NFL Regular Season quarterback who is a loser in Post Season by most of those who bet on sports in the US. He racked up astronomical numbers in the first four months in the season, but always struggled in the NFL Playoffs.

Peyton Manning retires after equalizing in family race with his brother

That perception changed slowly. He reached his first Super Bowl in 2007 with the Indianapolis Colts and though he was helped by an elite defense big time, he got away with a ring and the Super Bowl MVP award. Then he met his hometown franchise, the New Orleans Saints in the 2010 Super Bowl, but lost – partially because of Tracy Porter intercepting his pass intended to Reggie Wayne and converting it to a pick-six to seal the game.

After a series of neck surgeries he had to miss the 2011 NFL season. His arm strength suffered the procedures and he was replaced by 1/1 draft pick Andrew Luck for the 2012 NFL season. But Manning had his best to come and moved to Colorado to play for the Denver Broncos. After his best ever year, the 2013 NFL season, he got another chance to win the Super Bowl. But he and his team blew their chance in the opening minutes and was thrashed by the ruthless Seattle Seahawks.

Many internet betting players thought that was Manning’s last chance. The news that Peyton Manning retires without becoming a multiple Super Bowl winning quarterback were expected to break sooner or later. But he did not gave up and in the 2015 NFL season, when he was obviously a fading player already and had to miss weeks due to injury, still managed to do just enough in offense – backed by another elite defense – to bring the franchise the Vince Lombardi Trophy. And he equaled the number of Super Bowl rings his younger brother, Eli possesses.

Peyton Manning retires as a champion

Peyton Manning retires as a champion from the Denver Broncos, just the way his General Manager at the Colorado franchise, John Elway did in 1998 – the same year when Manning started his NFL career. It is also important to note that Elway was who brought Manning to the Mile High Stadium in 2012. There were a few other players in NFL history finishing their careers as champions, but these two legends are the most prominent players ending their careers in such fashion.