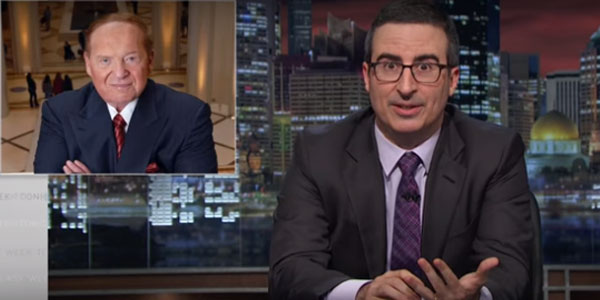 One of the great defenders of the public interest took to the air last Sunday night to give us yet another rip-roaring expose of the danger we are all in as Real Journalism™ comes under increasing threat of being swamped in the new digital landscape, but did John Oliver tell us anything about which we are actually concerned? Did we really care what Sheldon Adelson does with his toys?

From his leftist perch over on HBO the host of “Last Week Tonight” John Oliver delivered yet another diatribe against the modern world, wringing his hands and wailing at the slow demise of Real Journalism™ and the interference in the open and honest practice of journalism by rich billionaires like Sheldon Adelson who own the publications that Mr. Oliver considers hugely important to the safe and secure practice of democracy, and technically of course he’s absolutely right. He just forgot something. We don’t care.

Democracy has let us down so badly now we really don’t mind that one limb of our social system has withered away. The demise of print journalism may well be a ghastly blow to the range of oversight that the 4th estate can undertake but since it’s oversight wasn’t stopping the rich like Sheldon Adelson rolling roughshod over the rest of us what’s the difference? If you were in the US gambling news in print form would be able to continue as before in the digital age, you’re insane, but Mr. Oliver insists there’s a bigger issue.

“A study of over 200 papers found that between 2003 and 2014, the number of full-time State House reporters declined by 35%.” said Oliver on his show Sunday, going on to play a clip of David Simon former Baltimore Sun reporter saying that it was that sort of journalism that was the “Bedrock of what keeps [corruption at bay]” Which isn’t true. The bedrock of keeping corruption at bay is not electing corrupt people. And no corrupt person has ever been elected in the US, right? Oh. Wait a second….

“Not having reporters at government meetings is like a teacher leaving her room of seventh graders to supervise themselves.” Said Oliver then going to great lengths to bemoan that the internet age has created a populist slant (puppies over politics) that doesn’t bode well for our democracy. You know. The democracy that has thrown up Hillary Clinton and Donald Trump (who is 3/1 to win at Bet365). That democracy. The one leaving people in the US gambling laws on impeachment will be expanded in January. That democracy. The democracy Mr. Oliver doesn’t seem to really understand.

What else to expect from Mr Adelson’s publication? (Photo: Review Journal)

Further lamenting the corruption of journalism Mr. Oliver pointed out that Sheldon Adelson has a lot of business interests in Vegas and that the Las Vegas Review-Journal (which he owns) has to run anything it says about him through a special panel, and sometimes they change what has been written to reflect Adelson’s attitudes, especially if it has been written about Adelson or his interests. This is, naturally, a cause for concern…..if you’re an HBO TV show host. The rest of us are left wondering; “Yes. And?” because isn’t that just how things work?

If you were a billionaire like Sheldon Adelson and you owned a news paper wouldn’t you decide what it said too? Stop it saying nasty stuff about you? If you bought a SatNav and when you turned on your car engine in the morning it said “Morning you middle-aged-ugly-failure” wouldn’t you get it reprogrammed? Is Sheldon Adelson really supposed to be spending millions a year on a publication that prints things counter to his own interests? Apparently John Oliver thinks so.

A Few Big Scandals Do Not Public Oversight Make

Now obviously I think Sheldon Adelson is a odious right-wing evil that should be eliminated by sudden application of a high velocity munition from close range and that his agenda and attitudes are sickening, however, doing what you like with your property is kinda one of the whole points of democracy. Democracy is people doing what they want with their country. At least in theory. John Oliver seems to feel that shouldn’t extend to the very rich who must by dint of their wealth be self-less.

In theory of course this is lovely, but once again you can’t have it both ways. You can’t on one hand say that democracy is in peril because of nasty rich people doing whatever they like, and on the other say they should be forced to act differently from every other self-interested human being on the planet. Altruism is delightful but you can’t make it mandatory for people of certain income brackets. That’s insane. Sheldon Adelson is allowed to be as selfish with how his money is used as I am with mine.

Real Journalism™ may well have a problem with Sheldon Adelson and his ilk, but it is one of their own making. Perhaps if they’d not hacked dead teenagers, not concentrated on celebrity bullshit and not bored us with their editorial preaching we’d care more that they’re finally facing extinction now, but we don’t. A few big scandals broken don’t make up for it. Sorry Snowden but they don’t. I regularly bet on sports in the US at Bet365 but I wouldn’t put a single red cent on Real Journalism™ surviving for as long as they fail to admit they sold us out years ago and that this is simply Karma returning the favor.