Shock at Rio 2016: favorites fail at the Olympics’ first rounds 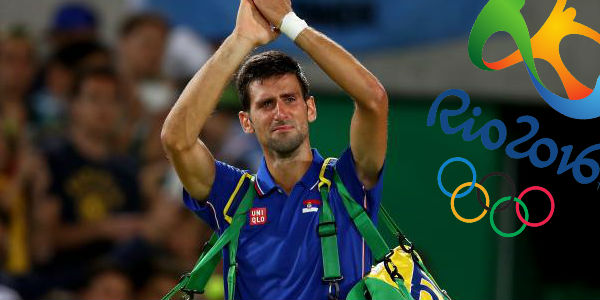 Novak Djokovic and former Olympic champion Venus Williams prepared a shock at Rio 2016 by being eliminated at the start of the Olympics.

The first two days of the Olympics already offered us surprises that only sports can bring. The news of the day come from the Olympic tennis court in Rio where Juan Martin del Potro shocked the favorite for the title No. 1, Novak Djokovic, winning the match with 7-6, 7-6. Novak Djokovic left the court in tears, stating afterwards that this was one of the toughest defeats in his life. In a match which lasted for almost two and a half hours Djokovic didn’t succeed to make a break at any point in the match.

It is interesting to see how the chances of del Potro change after this astonishing victory. Online sportsbooks in Australia such as Sportsbet place del Potro on the third place of favorites for the gold with 9.00 odds, right behind the now leading Andy Murray and Rafael Nadal with 2.10 and 7.50 respectively.

Venus Williams is out too: in single and with Serena

The sisters Williams are also out of the further competition in Rio. At the first day of the Olympic, Venus Williams, a former Olympic champion from Sydney, shocked the audience by losing the match with 2-1 in sets from the Belgian Kirsten Flipkens. At the second both Serena and Venus fail to defend the Olympic title from London 2012 by being defeated in the first round from the Czech pair, Lucie Safarova and Barbora Strycova.The domination of the Williams sisters, lasting since the Olympics in Sidney has thus been finished.

Surprises were not missing in the team sports either

Shocking victories in the team sports on the Rio Olympics are already announcing interesting tournaments in several sports. No one believed that Qatar’s handball team, in whose squat there are only three Qataris, can repeat the game from the World Championship played in Doha, but yet they did. And no more nor less but by shocking the former double Olympic champions, Croatia, with a victory in their match with 23-30. Zarko Markovic, the Montenegrin with Qatari passport was an enigma for the Croats scoring 10 times, bringing thus Qatar closer to the next round.

At the women’s handball tournament the actual Olympic champions Norway also lost their opener against Brazil by 29-31. However that is nothing new. They did it at the last Olympics and at the European and World championships. Yet, they always reached the finals. All you who bet on sports in Brazil, be sure they will repeat that in Rio too, beside this fail at the opening match.

What was more shocking at the handball court was the defeat of the Romanian team a day earlier by Angola. The African team surprised Cristina Neagu and Co. by a sensational win of 23-19. Isabel Guialo was shining for Angola while Cristina Neagu socred eight for the Romanians.

The basketball tournament also didn’t go without surprises. The French team, bronze from the last European and World championships were declassed at the start by the Australian national team with 87-66. Tony Parker was the leader in the French team with 18 points while Mickael Gelabale added 13 with 5 out of 5 score from the court. Internet betting sites in France were considering the French team to be one of the favorites for medal in Rio. However, one thing is certain after yesterday’s match. They will have to do it a way better that what we saw if this prognosis is about to be true.