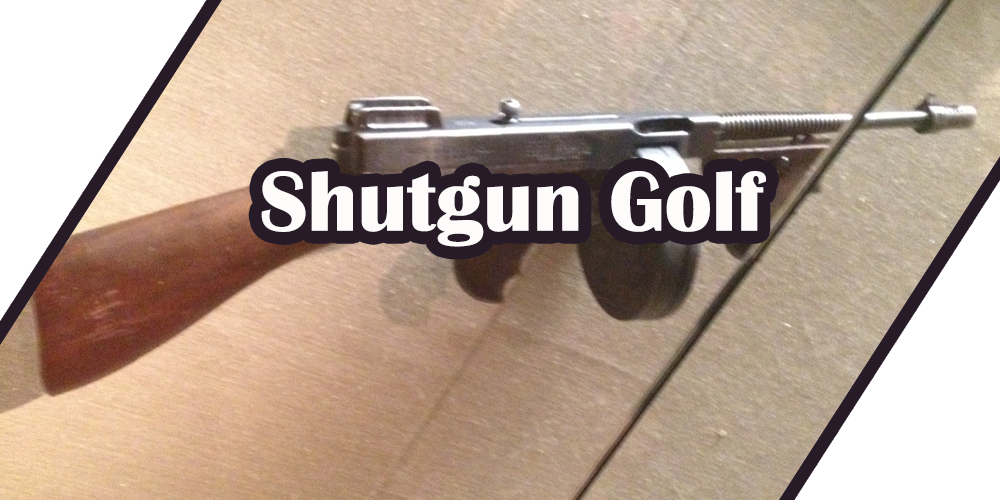 British researchers have discovered that Golf is the most boring sport in the world. If you are a golf fan () fear not! The idea of Shotgun Golf is not new, but maybe mankind is grown enough to adapt to this beautiful game. While you can make bets on the biggest golf events through online sportsbooks in the US. 1xBET Sportsbook, for example, has one of the greatest odds, why would you do it? Instead, you should work on making Shotgun Golf a national sport.

Shotgun Golf is invented by the doctor of journalism, Hunter S. Thompson. While the game is very simple, it never gained the attention it deserves. Let’s see why this ominous game didn’t succeed and find out how could we dominate the world with it.

To play Shotgun Golf you will need a shotgun

Do you know that guy who lives in Colorado on a huge farm?  He has many peacocks on his estate. You must have seen the peacock man! No?! Every night he is shooting with different guns while singing the national anthem. If that’s not enough he has a cocaine addict monkey he brought from Vegas. Once he shot his gardener, in front of the jury he said that he was mistaking the man with a bear coming out of the bushes.

Doing a rampage on your company’s money have some consequences. As Thompson finished his Las Vegas trip he had to face these consequences. While the paper he worked for began to sue him, he had to find a solution. The solution was simple, he was running to Puerto Rico to escape the law. There, he wrote the Rum Diaries and from the royalties, he paid back what he owed and was able to move back to his peacocks in Colorado. That’s where he had the enlightened moment to invent Shotgun Golf.

How Shotgun Golf was made

One day in 2004 at 3 A.M. there was one thing that Bill Murray didn’t except. To have a phone call. However, plans for sleep here or there didn’t have much chance as Hunter S. Thompson was ringing him insistently. The reason for this early call was to celebrate the fact that the sports world would be reformed forever and golf won’t be the most boring sport anymore.

According to Thompson’s article on ESPN, the following conversation went through the lines

HST: “Are you ready for a powerful idea? I want to ask you about golf in Japan. I understand they’re building vertical driving ranges on top of each other.”

BILL (sounding strangely alert): “Yes, they have them outdoors, under roofs …”

HST: “I’ve seen pictures. I thought they looked like bowling alleys stacked on top of each other.”

HST: “I’ve called you for some consulting advice on how to launch it. We’ve actually already launched it. Last spring, the Sheriff and I played a game outside in the yard here. He had my Ping Beryllium 9-iron, and I had his shotgun, and about 100 yards away, we had a linoleum green and a flag set up. He was pitching toward the green. And I was standing about 10 feet away from him, with the alley-sweeper. And my objective was to blow his ball off course, like a clay pigeon.”

Why Shotgun Golf didn’t dominate the world yet?

Great question! However, there are many things coming into mind. Just like with the great chess-boxing sport, game balance is an issue here as well. I mean if you know just the very basics of chess you can stand up to anyone for about 20 moves. And if you are able to play your time well boxing will decide everything, thus if you are good at boxing then chess doesn’t play a big role at all. It can be a bit similar with Shotgun Golf, the golf player hits the ball as hard as he can, however, if the shotgun man is skilled he will be able to take down even the fastest golf ball.

Every successful sport has complex rules. While football looks simple at first glance, just think about how many rules they have. These rules are granting game balance and that there are no cases when something cannot be judged. This lacks in Shotgun Golf. While the game is simple and can be played by anyone who has golf accessories, a shotgun, some booze and a load of acid, rules should be concretized. At the time when Hunter S. Thompson was inventing the game he had serious health problems, a broken leg, he was going through hip surgery and had clinic pain in his back. Not long after inventing the game, he ended his life with a shotgun shot in the head. Maybe that’s the reason why he couldn’t finalize the game, however, now it’s our duty to make Shotgun Golf great again!