Should You Bet On England Winning The 2019 ICC World Cup?

News >Should You Bet On England Winning The 2019 ICC World Cup? 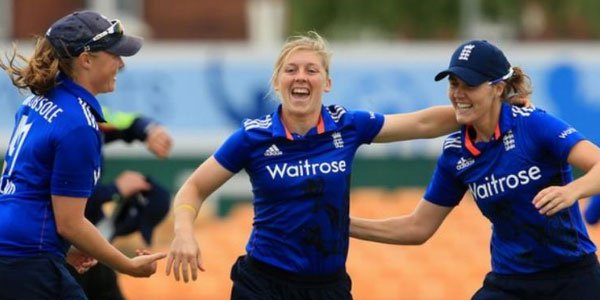 England’s recent victory at Lords winning them the Women’s World Cup has highlighted that we are, this summer, now closer to the next ICC World Cup in 2019 than we are the last in 2015 and reminds us that once again the tournament will be held hostage by the somewhat unpredictable British weather. The question is can the men emulate the ladies? Is a bet on England winning the 2019 ICC World Cup at Bet365 a daft idea this far out or will you just be getting the best of the odds ahead of the game?

Winning the toss and electing to bat England ran up 228/7 in the final, with Natalie Sciver getting a strong 51, and India weren’t able to catch up despite that 85 from Punam Raut, Anya Shrubsole taking 6/46 in 9.4 overs to seal the English win. It was an impressive victory and one the men’s team will obviously wish to copy, but two years out from the first match their current performance does seem to make that bet on England winning the 2019 ICC World Cup a rather brave bet on sports in the UK.

Sure, England have gone 2-1 up in the series against South Africa with a convincing 239 run win at the Oval, but it doesn’t quite remove the stain of their shockingly bad Trent Bridge defeat in the second test. Indeed the men’s team are so shaken that they’ve taken on Mark Robinson and Ali Maiden, the coaching team that assisted the women’s win this summer, to aid Joe Root and Co in the lead up to the fourth test and perhaps makes a bet on England winning the 2019 ICC World Cup a bit more attractive.

Now Bet365 are quoting England at 9/2, and at that price a bet on England winning the 2019 ICC World Cup is not a bad proposition, especially if they can sort out their consistency issues, and well worth taking advantage of UK gambling laws to place before Brexit wreaks chaos with online gambling regulations across the continent. Of course those 9/2 odds at Bet365 on England winning are precisely the same as the ones they’re quoting for some of the other big sides, particular South Africa.

South Africa may have pounced on England’s weakness in Nottingham but whether they can do it again is another question, their side has issues too, although not quite as bad as the other 9/2 shot at Bet365, India whose defeat by Pakistan in the Champions Trophy left them bereft. Indeed Pakistan’s performance means that if you don’t want to bet on England winning the 2019 ICC World Cup you can always plump for Pakistan to take the win at 10/1, a better bet, I feel, than New Zealand at 6/1.

Can England’s Men Emulate The Ladies And Win In 2019?

New Zealand has more issues than Playboy and those odds are awfully generous especially when Sri Lanka are garnering the same as Pakistan on 10/1 and the West Indies, who’ve batted great guns in their warm up match against Essex (Chase 81, Braithwaite 61, Blackwood 59) getting 309 for 8, are only on 12/1 at Bet365 which seems a little mean if they keep this form up. A bet on England winning the 2019 ICC World Cup might more sensible than these wagers, and yet they’re not the favourite for victory.

The favorites 2 years out are Australia who were pipped into the Champions Trophy semi-finals by Bangladesh. Australia get 10/3 to win (whilst Bangladesh get just 50/1) and if you’re dead set against a bet on England winning the 2019 ICC World Cup it’s probably Australia you should be backing at Bet365, although their performance this summer does mean that’s no sure bet and there will be more than a few people in the UK gambling news headlines in the next few months will lengthen those odds.