Banned machines may be replaced with new ones if law passes 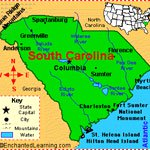 While there may be some changes to the American gambling laws, legalizing certain online gambling activities on a federal level, some states will keep banning some or all such forms of entertainment.

South Carolina may be one of them. Lottery is the only form of gambling currently allowed in the state, and many legislators are intending to keep it that way. Others would like to broaden the choices available to their constituents.

Local laws have been prohibiting slots and video poker machines for a long time, but games operators found a loophole, setting up fake businesses to promote “sweepstakes” to their patrons. They claimed that customers who paid for their “services” (e.g. copying) were entitled to play video games that offered cash prizes.

Although lawmakers closed that loophole last year, a new bill was recently submitted and has been going through the usual committee hearings. The proposal would permit coin-operated games without direct cash payouts, but awarding tickets or tokens instead. Prize values would have a five dollar cap per play.

Although some of the bill’s opponents perceive a sneaky attempt to bring video poker back, it is clear that such small scale gaming is unlikely to create social problems, nor is intended to lure the high-rolling crowd away from the unlicensed out-of-state online casinos.

“Anyone who wants to do video poker can do it right now on the Internet,” says Rep. Bill Herbkersman (R), who sponsored the bill.

He claims that it is all about personal choices in entertainment, creating a legal venue for those who do not want to visit mobile casinos and other online options, but would prefer to go to a local games parlor.

“It’s not a gambling law. It’s a personal freedom law,” says Herbkersman. “We want to get ladies in Sun City to be able to go in the clubhouse, have a glass of wine and play cribbage.”

The short moral of the South Carolina story: people want to play.