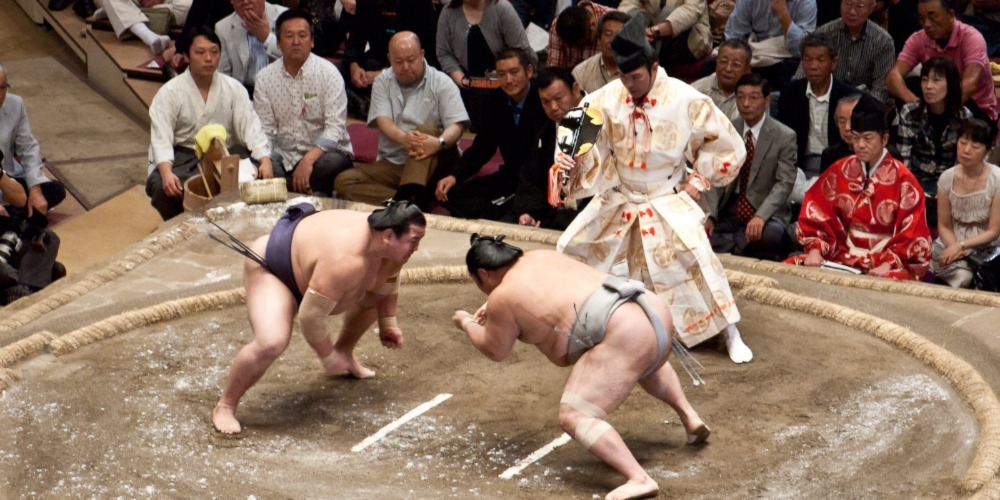 Sumo, or Ozumo, is an ancient Japanese sport. They found the first record of Sumo wrestling in Kojiki, the Record of Ancient Matters, the oldest surviving book of Japanese history, from 712. The Kojiki describes a legend about how people decided on the ownership of the Japanese islands through a sumo match. According to the book, this happened 2500 years earlier. So, we are talking about a sport with a very long tradition. In this sumo betting guide, you will find the most surprising and significant information about the Japanese sport!

Sumo in a Nutshell

First, let’s start with a brief review of sumo. In Japan, sumo is still having its heyday. If you want to become a real professional sumo wrestler, you must move there first because they follow ancient traditions. Oh, and you have to be a man because women can’t become professional athletes. The Japan Sumo Association has many rules and regulations regarding the lifestyle of a sumo wrestler. As a result, professional wrestler follows a highly regulated lifestyle. Violating the regulations may result in the wrestler and his master being fined, suspended, or both.

The Japanese sumo athletes gather in heyas, rooms. They even live in small communities, like a family, led by the master or coach. The younger beginners serve the older, higher-ranking ones, and only the highest-ranked wrestlers have separate rooms. They hold six championships and tournaments every year, each lasting for 15 days. The wrestlers have a match every day. That’s why they live under a lot of stress. There are no women in Japanese professional sumo; they can only practice this sport as amateurs.

If a woman touches the arena, it must be re-consecrated. You will find more details about this below. Even though physical activity dominates, sumo has a deep, religious aspect, and they do several rituals before a match. For instance, they sprinkle salt even at amateur world championships. There are also tournaments outside Japan, like the European and World Championships. Sumo also appeared in the World Games, the most prominent competition series for non-Olympic sports, which is organized every four years, similarly to the Olympics.

Women in the Sumo Ring

You are about to read the most surprising and not-so-fair story! Women can participate in sumo competitions around the world, in contrast to the Japanese rules. In recent years, there have been more and more women who have become pioneers in sumo wrestling. Today, women can freely practice this ritual martial art, but only as amateurs. They do not have the opportunity to play professionally, at least in Japan. Many women are great talents but quit sumo before reaching their potential.

Few coaches understand and can train a female wrestler, plus, often, they cannot even find sponsors. The entire infrastructure revolves around men’s sumo. The female competitors, of whom there are currently several hundred, enter the ring according to the same rules as the men, only they wear T-shirts in addition to the famous sumo belt. So what is the reason behind not allowing women even to enter the place or become professional sumo wrestlers?

Most of the rituals are a kind of cleansing ritual. Of course, the ring itself is considered a sanctified place, and the traditions formed over thousands of years are still alive and in force today. The participants must do everything to preserve the purity of the arena, in the sacred sense. The reason for women not entering the ring is more surprising than you might think. According to online sportsbook sites in Japan, women are considered unclean because of their cycle in Japanese traditions.

If you think these are just old, stupid rules that are no longer followed in the 21st century, you are mistaken. They take this otherwise outdated and extremely discriminatory regulation so seriously that when the mayor of the city of Maizuru, Ryozo Tatami, collapsed in a sumo ring in the middle of a public speech in 2018, the referee did not allow the female doctor who rushed to help to enter the arena, and this was not the only time something like this happened. Check out other interesting facts about sumo!

Sumo Betting Guide – In the Ring

Both female and male competitions take place in several weight categories. For men, there is a lightweight under 85 kg, a middleweight under 115 kg, and a heavyweight over 115 kilos. Here, the maximum body weight is not limited. In addition, the wrestlers compete in the open category, where everyone can start regardless of their body weight, and it receives the greatest interest.

In addition, even in Japan, they also organize team competitions in amateur sumo which gives the spectators an entertaining sporting experience. The wrestler is called a rikishi, while the circular sumo ring is called a dohyō. The rikishi tries to force the opponent from the dohyo, or get any part of his body to touch the ground. They can achieve this by pushing, throwing, or pressing down.

The most common techniques include grabbing the opponent’s mawashi or belt and forcing them out of the ring, this is called yotsu-zumo, or they can push the opponent without a firm grip, called oshi-zumo. Illegal moves, called kinjite, include hair pulling, choking, grabbing the area between the legs, poking the eyes, kicking, punching, and punching an opponent’s ear.

Even though baseball and football have recently become extremely popular in Japan, sumo is still the country’s national sport. Sumo is even more unique by the diversity of rituals, ceremonies, and traditions. Some of these traditions are centuries old and remain unchanged. These include ring entry ceremonies called dohyo-iri at the beginning of each tournament. Wrestlers appear in the ring in their unique mawashi.

They throw salt into the ring to purify the space, driving away all evil spirits. Wrestlers also clean their mouths with pure water or chikara-mizu before a fight. This is similar to the ritual performed before entering a Shinto shrine. Before the match starts, sumo wrestlers also do a warm-up routine called shikiri. As soon as they have finished the cleansing ritual, the wrestlers re-enter the circle from exactly the east and west directions.

They crouch opposite each other with their knees wide open, and after a powerful clap, they raise their hands with open palms to show that they do not hide weapons. This is a sign that they are ready for a fair fight. After that, they take up a fighting position behind the starting line, and you can put this sumo betting guide to good use then. Check out the whole scene at online sportsbook sites in Japan!

Sumo requires some strange rules even outside of the ring. For instance, a professional sumo wrestler is not allowed to drive a car. Though, this rule was born out of necessity, as a wrestler is too big to fit behind the wheel. After entering the world of wrestling, they must grow their hair long enough to tie a topknot or chonmage like the samurai hairstyles and not just in the wrestling ring of the competition.

They must also wear traditional Japanese clothing in public, so people can identify them as wrestlers easily. Depending on their rank, the type and quality of clothing vary. There are six divisions of wrestlers: makuuchi, which is the highest level, then jūryō, makushita, sandanme, jonidan, and jonokuchi, the lowest. The jonidan and jonokuchi can only wear a thin cotton robe called a yukata, even in the freezing winter. In public, they wear wooden shoes called geta.

Wrestlers of the makushita and sandanme ranks may wear a short, traditional jacket over the yukata, and instead of geta, they wear straw sandals known as zōri. A sekitori, classified as makuuchi or jūryō, wears a silk robe of his own choice. The quality of the clothes improves as wrestlers move up the ranks. They fight at the professional sumo tournaments the Japan Sumo Federation organizes. The association is made up of former wrestlers and is known as oyakata. Only they are authorized to train new wrestlers.

Sumo wrestlers must complete at least nine years of mandatory training and meet the required height and weight to qualify as professionals. However, these strict rules are not without harmful consequences. In 1994, the association announced that wrestlers must be at least 5,7 feet tall. This prompted Takeji Harada, a 16-year-old who failed eligibility tests six times, to undergo four cosmetic surgeries in a year to add an additional six inches of silicone to his scalp.

As a result, he developed a large, protruding bump on his head. The association responded by announcing that they ban those who undergo surgery to increase their height from the tournaments. Plus, they consume 20,000 calories a day which affects their health. Studies have shown that their average life expectancy is between 60 and 65. All wrestlers change their names when they enter sumo wrestling.

Wrestlers don’t have much choice in their names. Either their master, a fan or a family member, who encouraged them to take up the sport, gives them their new name. They established the professional sumo ranking system in the Edo period. They determine the ranks based on their performance in the six official competitions in a year. The association publishes the hierarchy two weeks before each tournament, which you can find at Bet365 Sportsbook.

Sumo is not among the most common sports bets. Bookmakers often make mistakes in predicting the winner of the match so you can find good odds. Sumo offers a small selection of bets, which makes it easy to analyze the statistics and choose the event suitable for betting. The key to success in sports betting is the correct analysis of the upcoming match. There are numerous sources on the Internet providing sumo betting guides and infos on all sumo wrestlers, like Bet365 Sportsbook.

You can find details on an athlete’s training, fights, and ranks. When analyzing the upcoming match, it is necessary to monitor not only the number of wins and losses but also the quality of the fight. It is crucial to know which athlete the selected wrestler fought. He may have five or six wins in a row, but the opponents are in lower ranks. In this situation, victories mean nothing.

A characteristic of sumo is that many athletes achieve significant success after missing competitions. If they have an injury, then you should not expect good results, but after the exclusion, good performance is not rare. During the break or suspension, the wrestler gains strength and thoroughly prepares for the tournament. The bet types include the usual wagers, guessing the final winner or the loser. At Bet365 Sportsbook, you can find women’s categories as well!