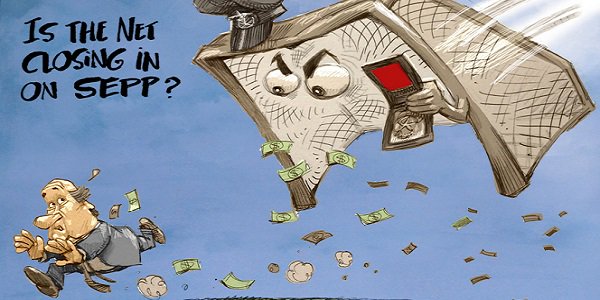 A week on from Swiss authorities announcing they were launching a criminal investigation into Sepp Blatter the entrenched and embattled outgoing President of FIFA, the world footballing body’s ethics committee has to decide if the Swiss powerhouse behind football will be suspended for 90 days. The question is, whether he goes now of in February, how can FIFA move forward from this domino-toppling pattern of corruption?

Sepp Blatter’s reaction to FIFA’s ethics committee recommending he be suspended for 90 days was to complain that he was being “condemned without there being any evidence for wrongdoing” however whilst innocent-until-proven-guilty is a cornerstone of western jurisprudence sometimes the lack of evidence can’t be allowed to prevent justice taking its course. Sepp Blatter’s guilt might be a little tricky to prove (no one said he was stupid) but no one actually thinks he’s innocent now.

Whilst someone’s innocence must be a starting point for justice to work correctly, and proof should be presented before the accused is punished (or moved to another diocese), this does not mean all people are equally innocent to begin with. As the Swiss authorities finally get round to beginning an investigation into Blatter himself, Sepp has to understand that he cannot expect to be treated as a potentially innocent man when he looks as guilty as “a puppy sitting next to a pile of poo”.

I wonder what he needs time for until February

Precisely why and under what circumstances Sepp Blatter paid Michel Platini two million dollars may never be known by Swiss authorities, a truth known only to the two of them, although Mr. Platini has already said it was “valid compensation” for his time working under Blatter at FIFA. Given what working with the odious Swiss creep must be like, perhaps that’s fair enough, but the very fact the ethics committee has to consider it at all might put Platini out of the running for Blatter’s job.

Officially Blatter, who looks like a Nazi version of the Fat Controller from ‘Thomas The Tank Engine”, is due to leave his post when he’s replaced in February next year, and Platini will be gambling news coming out of the ethics committee and indeed Swiss authorities won’t see him unable to stand due to having been suspended from his post. Platini is the natural candidate to take over from Sepp Blatter, being to FIFA what the Continuity IRA are to peace and stability in Northern Ireland.

Whilst after any large scale scandal it is important that a profitable corporation (Oh yes you are FIFA, take your not-for-profit bullshit and shove it) to show that it’s business as usual, the sheer number and scale of the manifestly obvious corruption within the organization in this case begs not the question who will take over from Blatter and reform it, but why Blatter hasn’t been taken out on the front steps and beheaded in front of the world’s press for his crimes against the greatest sport on the planet.

Having Platini take over as President of FIFA would be like Volkswagen cupping it’s hand theatrically to its ear and saying in a loud voice “Vot? Vot vass dat? I’m szorry but I can’t hear vhat you are sayink.” as people screamed at it about its mercenary destruction of the environment for its own profit margins. As Swiss authorities will doubtless agree FIFA doesn’t need an old hand at the tiller right now, it needs a different (and possibly much bigger) boat. When the ethics committee meets today to decide what will befall Blatter, football’s future is on the line.

Will it be business as usual? Will FIFA actually try and sweep all the investigations by Swiss and American authorities under the carpet with a new president just as grimy as the last who’ll trot out some cosmetic “reforms” but continue the gravy train for him and his cronies? Investigations into TV deals and the biding process for the 2018 and 2022 World Cups might well continue but if the President were Platini you can just bet the results would be cushioned by official hand wringing about the “previous regime”.

Blatter and Platini can claim as much innocence as they want before the Swiss authorities but when corporate scum like Coca Cola and McDonalds are calling you “tarnished” and start to worry for the “best interests of the game” and so call for your immediate resignation there’s something very wrong, after all that’s happened what caused them to withdraw support now? Those that like to bet on sports in Switzerland at sites like Bet365 are unlikely to be putting much on their innocence after it has been declared not to be the ‘real thing’ and that no one is “loving it”.

Blatter May Yet Bounce Back

With so much baggage it would seem tricky now for Joachim Eckhert, head of FIFA’s ethics adjudicatory chamber, not to suspend Blatter, but Platini’s fate is that of football, and we need another way forward. Chung Mong-Joon, former FIFA VP has said his candidacy to replace Blatter is being “smeared” but since he’s under investigation by Swiss authorities too that’s just par for the course. Come February there could be precious few candidates left able to run at this rate.

This may be a good thing. Having suffered through the corrupt era of very clever people being in charge of world football perhaps it’s time to have some people who just aren’t all that bright in charge instead. Footballers for instance. And yes, I know, Platini was a footballer, but he was a smart arse from the off. No, I’m talking about using some of the less polished turds of the soccer universe, those Swiss authorities would never have to investigate.

Can you imagine a complex web of corruption run by Wayne Rooney being investigated by Swiss authorities? No of course you can’t, he’s far too stupid to be criminal, and if he tried it he’d get caught not years down the line but red handed with an envelope of cash and gold leafed weave on his head. That’s not to say he couldn’t ask the obvious questions and simplify the manner in which FIFA does things, clever people love to make things complex, simple people do the opposite.

This then is the only way forward for FIFA now if it wishes to be credible; put a simple minded fool at the top to clown for the cameras and sledgehammer their way through years of corrupt practices simply by saying “They did what?” and threatening violence, after all, it seems to be working for the Catholic Church, doesn’t it? FIFA might not be so forward thinking however, and of course if you’re Swiss gambling laws concerning corruption will eventually see Blatter jailed, think again, the only reason he’s still around is that he knows where the bodies are buried, which means the fat boy might be back.