Tennis Bad Boys: A look at some of the Most Fiery Players in Tennis History 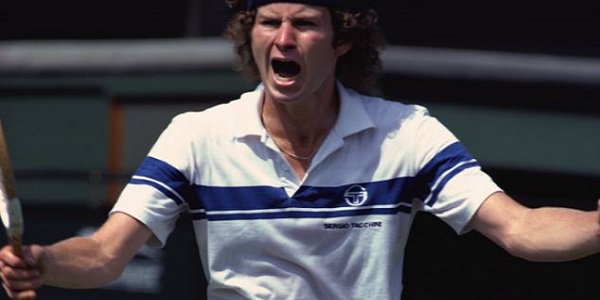 Tennis Bad Boys gave us the worst and the best the sport had to offer.

Nick Kyrgios is a player you may not have heard of two weeks ago. The Australian, who’s ranked 41 in the world, definitely was a product of talent and hard work. His only greatest achievement was two quarter final appearances at two Grand Slam tournaments. After he was fined 10,000 dollars for comments made to Stan Wawrinka about his girlfriend’s “intimate activities”, Kyrgios became the new poster child of a tennis bad boy. Now online gambling sites in Australia and fans alike have their eyes set on him.

The 20-year-old Australian definitely has his work cut out for him in order to make the tennis bad boy list. The ultimate bad boy in tennis was John McEnroe. Though he’s not the first, McEnroe drafted the “blue print” for bad boy behavior. Audiences have never seen a player who was so talented and yet continuously argued with umpires. His antics alone would’ve made him a hit on online gambling websites. Many people watched the U.S. Open and Wimbledon champion play tennis in order to witness his outbursts.

Tennis bad boys from long ago and today

The cartoon menace is not just the looks

Dennis Ralston was a tennis bad boy during the turbulent times of the 1960’s and 1970’s when protesting was a common practice. Unfortunately, Ralston rarely found his share of appease on the tennis courts. Affectionately called “Dennis the Menace”, based on the popular American TV show, Ralston lived up to the name. He once hit three balls out of a stadium in anger and was slapped with a six-month suspension.

Pancho Gonzales was the first Mexican-American tennis star. As a standout in a traditionally white collar sport, Gonzales decided early on to fight racism directly. As a result, he never retreated from anyone. Gonzales was often described as a jerk, who really never gave anybody the chance to see him in any other way. Incredibly skilled, the trailblazer held the world number one ranking for eight consecutive years.

Marat Safin led a life that almost personified the young, playboy athlete. A life of beautiful cars, beautiful women and a “take no (expletive) on the court” attitude made Safin one of the most lethal players in the early 2000s. The Russian often argued with opponents and umpires with the same impunity. So impressive were his exploits that Safin now works with Russian Prime Minister Vladimir Putin.

Ernest Gulbis is basically a rich kid from Latvia, but has the makings of a fine bad boy. Despite his drop in ranking from 10 to 68 in a single year, Gulbis possesses some skills. The Latvian is prone to using salty language and boasting his racket-throwing abilities on the court. Although he admits to his lack of discipline and interest in practicing, Gulbis wishes to be ranked in the top 10. In addition, he finds the top players in the sport incredibly boring. Perhaps online sportsbooks in the US should watch out for this 26-year-old.

Tennis bad boys dance to a song of their own

Richey or Roddick were no strangers to outbursts

Cliff Richey was a man with ability, but without a title. During the 1970’s the American was a major contender, but suffered from bouts of depression. As a result, Richey drank alcohol every day throughout his career. Richey would “explode” on the court without warning. It wasn’t rare to see the American break rackets on the court. Although he won 45 titles, the American could never win a Grand Slam.

Andy Roddick could be called everything except boring. Entering the sport after the reign of Agassi, the American exhibited a similar flair, but carried more hostility. Roddick’s combative behavior towards reporters and officials matched his “scrappy” style of play on the court. Roddick achieved celebrity status, despite his tantrums. Having won 32 titles and achieving the number one ranking in 2003, the American only made gambling news by securing one Grand Slam before his retirement in 2015.

Jimmy Connors would make anybody’s list of tennis bad boys. The American, unlike any other player, encompassed the class of the sport while exerting himself in a rough way. Connors was a hard player who defined “old school” on the court. Off the court, the American was considered arrogant. On the court, his animated, entertaining and fierce play made him one of the most popular players to watch in his day. The winner of 109 titles is considered by many one of the greatest men to play the game.

Nastase and Connors had trouble controlling their fingers

Ilie Nastase is the “patron saint” of tennis bad boys. With his long hair and flippant demeanor, Nastase enthralled the crowds. Nicknamed “Nasty”, he once got a call from a line judge and proceeded to toss his shoe at him. The Clown Prince of Tennis once wore a tee-shirt under his tennis shirt and in a fit of rage took the tennis shirt off revealing the image of a “middle finger.” The French Open and U.S. Open champion often used his antics to create a sense of control.