According to an article published yesterday by Thailand’s Pattaya People Weekly newspaper, a woman by the name of Chalitaoon was arrested by 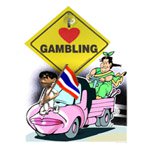 According to an article published yesterday by Thailand’s Pattaya People Weekly newspaper, a woman by the name of Chalitaoon was arrested by Huay Yai police on the evening of Tuesday January 26 under suspicion of having stolen a car. The 41-year-old woman was detained from a room she had rented at Kredkaew Village in Bang Saray.

Chalitaoon allegedly befriended the male owner of the car, only then to drug him and steal his vehicle. The woman intended to sell the car, and to use the money to feed her habit of gambling at online casinos in Thailand. Chalitaoon told police that she was addicted to online gambling, and that she had successfully drugged at least 10 people in the past, stolen their cars, and sold them for gambling money.
The Pattaya People Weekly story did not report whether or not Chalitaoon will be charged with illegal gambling. According to Thai gambling laws, nearly all forms of gambling in the country are not illegal. There are no casinos or bookmakers in the country, forcing players to either cross the border into Cambodia to gamble, or to play online.
Unfortunately, internet gambling in Thailand is also forbidden, but only by extension of the general ban on land-based gambling in the country. Thai laws do not directly address online gambling. This leaves a hole in laws that players take advantage of. By gambling at foreign-hosted online casinos, which are operated from countries which are outside of the jurisdiction of Thai police and where online gambling is legal, players hope to avoid trouble.
Despite Thailand’s gambling ban, it is estimated that 70% of the country’s adult population gambles, either offline or at underground gambling establishments. This demonstrates at least some level of tolerance on the part of Thai police. Regardless of how Chalitaoon’s admission of online gambling will be treated, however, her habit of drugging men and stealing their cars is not likely to go unpunished.