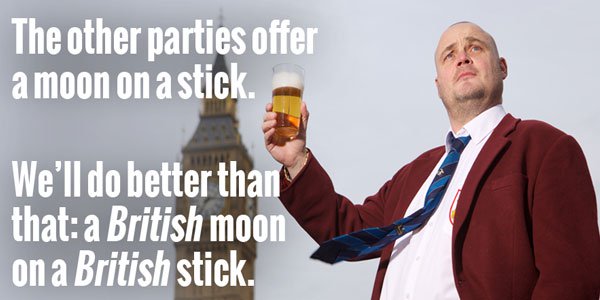 When the Pentagon, an institution that has lied so much and so often that even the NSA think them duplicitous, this week told us they believe Vladimir Putin has an ‘autistic disorder’ they backed up their story with phrases like “movement pattern analysis”, short context-lacking video clips and the hint that he might have Aspergers. This unfortunately says far more about the Pentagon than Vlad “Shark Eyes” Putin, who is even now probably gambling news reports from the five-sided-fun-house would make entirely adequate toilet paper.

Clowns To The Left Of Me, Jokers To The Right
• UK general election has a lighter side
• South Thanet sees comedian enter race
• Election scheduled for May 7th 2015

The US military is facing up to its own inadequacy issues in the only manner Americans know how; by becoming childish, petty and hugely passive-aggressive. Their victory in Iraq has been made farcical by the rise of Islamic State, their presence actually increased the production of opium poppies in Afghanistan, and Russia has invaded the Ukraine right in front of everyone’s eyes and there’s not a damn thing the Pentagon can do about it – well, not without risking ending the world in a varied-size selection of glow-in-the-dark mushroom clouds. Their impotence has been manifest, and they don’t like it.

We are often told the internet is the battleground of the future, but I’m pretty sure we were expecting ninja-esque hackers and technical system-wide attacks from the US military, not a bit of mildly stupid trolling. It’s tricky to claim you’re the most powerful military in the world when you’ve just resorted to a bout of name-calling that would be far more at home in the sphere of the school yard than that of international affairs. Telling the world Vlad is a mental case is just one rung above whispering to people at recess that he’s ugly and smells of shit.

What makes it worse is that like any inexperienced troll they’ve led with an attack very easily reflected back on themselves. Calling other world leaders mental when many of your own still won’t accept evolution, climate change and the right of women to do as they wish with their own bodies, is just a little too much like leading with your chin. A nation whose political process still contains Sarah Palin and Donald Trump isn’t really allowed to start leveling charges of mental disorder at anyone else with a straight face. Putin muscled his way into power, some Americans actually voted for Palin. What does that tell you?

The Lunatics Running To Run The Asylum

Not that Russia and America have the duopoly on deeply unsuitable political figures. Australia’s Prime Minister, Tony Abbot, is facing a leadership crisis after it was discovered he’s a complete plonker, Nick Clegg in the UK has outlined taxation plans for after an election he couldn’t win if he were the only candidate, and the Greeks have elected their own version of “Red” Ken Livingstone just to irritate the Germans and French who’ve both managed to put in power people with absolutely no sense of their own ridiculousness.

In the UK gambling laws won’t change to prevent their participation in the general election scheduled for May 7th this summer, there are a whole host of crazies looking to run in various parts of the country. The Monster Raving Loony party will put up candidates across the country, the Greens will pretend their policies aren’t barking mad (Save the environment? Yes. Disband the armed services and make it legal to join a terrorist group? No) and the traditional three major parties will all once again provide an array of non-entities and empty suits for people to put their cross by on polling day.

UKIP, the populist ego-massaging exercise of Nigel Farage that has based its entire existence around fear of foreigners and European integration, will be looking to make a big impact after it’s euro-election wins and those two by-elections it won by default (de fault of de voters), but whilst the three main parties are running scared, each shifting to the right in reaction to UKIP’s rise in popularity, some people in the UK are thankfully not so cowed and frightened of this tinpot fool Farage and are taking him on in his own back yard; South Thanet.

South Thanet is the constituency battle Mr. Farage will be contesting in the election with high hopes of getting himself a seat in a parliament he doesn’t hate (despite being anti-EU Nigel is the member of the European Parliament for South East England) but whilst people are still asking ”how many seats will UKIP win in 2015?” it won’t be an easy ride for the pint swilling, ciggie smoking man-of-the-people. This isn’t because he faces a tricky challenge from Labour, the Conservatives or Liberal Democrats, but because a UK comedian has decided to give him a hard time.

”Vote Guv For Guv’norment On May 7th”

Al Murray’s character “Guv” is based on the archetype of the British publican, or pub owner, and was first seen by a large audience in the TV comedy series “Time Gentlemen Please” where he dispensed pearls of small-minded, little-Englander mentality from behind the bar of “The Cow Shed”, his run down pub full of alcoholics (who he preferred to call “freedom fighters against the teetotal taliban”) somewhere in West London. Since then “Guv” has become hugely popular and Mr. Murray evidently thinks that popularity can be used to needle the man he repeatedly called “Mr. Farridge” in a recent press encounter.

Standing in South Thanet for the Free United Kingdom Party, with a logo that is manifestly a joke at UKIPs expense, Al Murray might not stand much of a chance of winning, despite being a celebrity, but the tarnish of ridiculousness will almost certainly rub off on Nigel. The press met Mr. Murray (as “Guv”) on his first day of campaigning and were treated to a comic performance that aped the political classes as a whole nearly as much as it did the UKIP candidate individually. In his red blazer and tie the publican claimed to have heard “destiny’s call” and answered it by standing in South Thanet.

“I’m glad you asked me that.” Mr. Murray began each reply to reporter’s questions, going on to say of his opposition “They’re all lefties, all of them, and we’re here to do something about that, and deliver common sense. Rational, decent, normal, reasonable, hard working, law abiding, down-to-earth, normal, common sense.” He then went onto list some of his manifesto promises “Saving Manston Airport, absolute number one priority, and then anything else I reckon people want to hear.” which apparently included bricking up the Channel Tunnel.

There’s a great tradition of political satire in the UK and this is merely a continuation of it, but with such a high media profile you can be sure this won’t be the last you hear of Al Murray, the pub landlord or the battle for South Thanet. For those of us that like to bet on sport in the UK, and what better sport can there be than racist baiting, sites like Bet365 are offering around 250/1 on Al Murray being an MP on May 8th, which unfortunately says as much about the voters of South Thanet as the stupid name calling did the Pentagon.