The Most Famous Female Athletes

News >The Most Famous Female Athletes 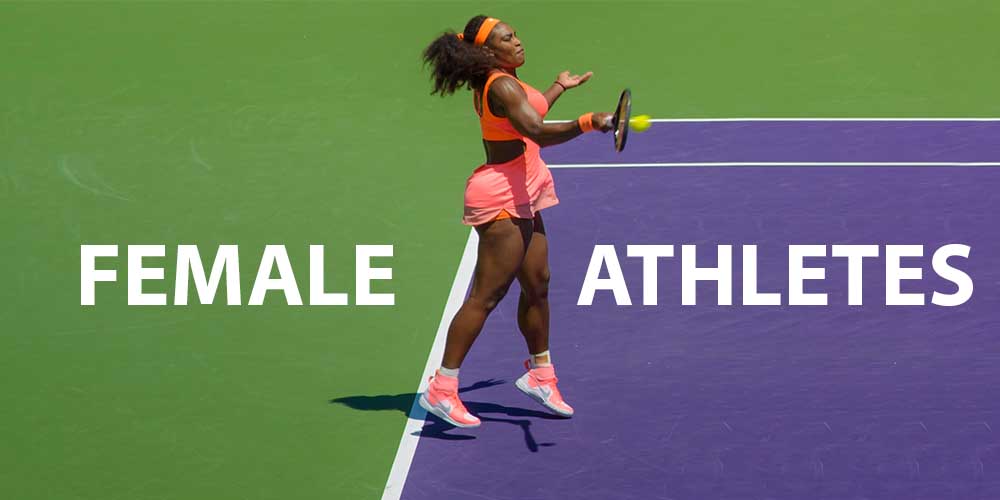 As Women’s Day is approaching, we thought we should take a look at the most famous female athletes of all time. They include tennis players, gymnasts, track and field athletes, and swimmers. But we had to mention football players and a female wrestler as well. They all achieved amazing results, even crossed the boundaries and represented what the ‘weaker’ sex is capable of.

Though there were a few examples of women athletes from an early age, women’s sport wasn’t really recognized until the last century. Even then female athletes were quite rare, in the second modern Olympic Games in 1900 there were only 12 female participants out of 1066 athletes. But later their number has started to grow, along with the number of events they could take part in. In the upcoming 2020 Tokyo Olympics, almost 50 percent of the athletes will be women. But who are the most successful female athletes in the history of the sport? Let’s see our list.

Real sports icons in the most famous female athletes

We can probably find the most iconic female athletes in the world of tennis. Just think about Billie Jean King, who wasn’t only a great tennis player, but also an advocate for gender equality. She won 39 Grand Slam titles, including 12 singles and the famous Battle of the Sexes game against Bobby Riggs. But we can mention Martina Navratilova, who was leading the world ranking in both singles and doubles for more than 200 weeks. She is still the only player who did it. She also holds the records for most singles and doubles titles. But besides all her successes, Navratilova has become famous for her political and social activity and fighting for gay rights.

Steffi Graf is one of the greatest female tennis players of all time. She won 22 Grand Slam titles, including a Golden Slam when she managed to win all four GS plus the Olympic Games in the same year. Graf was No1. for 377 weeks which is the longest period for any player to be on the top, even including male players. Graf helped a lot to make tennis popular in Germany and was loved all over the world.

One of the most famous female athletes today

Staying with tennis, we can’t ignore one of the most famous female tennis players, who has been dominating the sport for so long, Serena Williams. She and her sister, Venus Williams have reformed tennis and made it much more focused on physical power. She has won 39 Grand Slam titles, including 23 singles, which makes her third in the all-time list. What is even more inspiring is that she could come back after giving birth at the age of 36. And even though she hasn’t won any Grand Slam since then, she has already reached the final in Wimbledon and in the US Open twice.

Online sportsbooks in the US were also reporting that Serena was the highest-paid female athlete in 2016. She was also the only female in Forbes magazine’s highest-paid athletes’ list last year. We should see her next in the FED Cup in the US team, which has the odds of 3.98 at 1xBet Sportsbook to win the title.

In the world of athletics, we can also find several great female athletes. Like American Jackie Joyner-Kersee who won three gold, one silver and two bronze medals in heptathlon and long jump. She still holds the world record in the heptathlon since 1986 along with the six best results in the event. This is amazing as there have been many great heptathlons since, like Swedish Carolina Kluft and British athletes, Dennis Lewis, Jessica Ennis or Katarina Johnson-Thompson.

Yelena Isinbayeva was an amazing pole vaulter, the first woman to clear the five-meter. She still holds the world record with her 5.06 jump. The Russian was unbeaten in major championships between 2004 and 2008, she won two Olympics and three World Championships. Sadly she was banned from the 2016 Olympics as part of the Russian sanction, but she is still considered the best female pole vaulter of all time.

Probably gymnastics is not the most popular sport in the world, but some of the female gymnasts have become really famous. Like Nadia Comaneci who was born in Romania and was awarded the first perfect 10.00 in the history of the sport. Thanks to her scores she won three gold medals in the 1976 Olympic Games at the age of only 14. She also won two more gold in the next Olympics, when she got two more perfect scores. Comaneci moved to the US in 1989 before the revolution and has been living there since.

Before her, there was an even more successful gymnast from the Soviet Union, Larisa Latynina. She won 14 Olympic medals between 1956 and 1964, still holding the record with it in gymnasts.

Though there were many great gymnasts after her, we had to wait until 2013 for another superstar.  American Simon Biles appeared then and started to amaze the world. She has a total of 30 Olympic and World Championship medals so far, including four gold medals from the Rio Olympics. Online gambling sites in the US are predicting more success for her in the Tokyo Olympics.

From the pool to the ski slopes

Of course, there have been many great female swimmers as well during the history of the sport from Krisztina Egerszegi to Inge de Bruijn. Both of them won several Olympic medals during their career and were holding world-records. But American swimmer Katie Ledecky could exceed even their results. She won her first gold medal at the age of only 15 in the 2012 Olympics. She became the most successful female athlete of the 2016 Olympics with her four gold and one silver medals.

If we check winter sports, we can find mostly figure skaters as the most famous female athletes from Michelle Kwan to Katarina Witt. But the name of Lindsey Vonn might sound familiar even if you’re not a big fan of skiing. She has four World Cup titles, and she was the first American to win a gold in downhill in the Olympics. Vonn even surpassed the record of a man, Ingemar Stenmark for the overall record number at the World Cup. Sadly due to her injuries, she had to retire last year, but she is definitely one of the greatest female skiers in history.

Some female athletes have chosen a sport that is more popular in their male version. Like football, boxing or motor racing. But with their performances, they all made a lot to help to make these sports popular. Thanks to American Mia Hamm or Brasilian Marta, women’s football is getting more and more famous and watched by more people. You can even bet on their games on 1xBet.

Danica Patrick was the first and still only woman to win an Indycar Race and had the best finish in the Indianapolis 500 and Daytona 500. With her success, she inspired women to take part in auto racing. While Ronda Rousey was taking part in even more masculine sports, judo and wrestling. She was the first American to win a medal in judo in the Olympics and the only woman to win both UFC and WWE championships.

You can see more about these odds at 1xBet Sportsbook here.