The Two Sides May Still Be Polls Apart

News >The Two Sides May Still Be Polls Apart 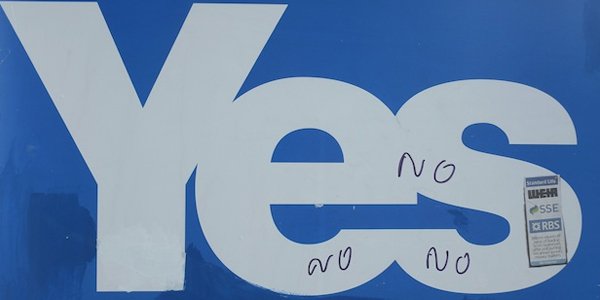 The pollsters are saying it is still too close to call but that is only because they are unsure of their data and are hugely worried they might have got it wrong.

As we enter the final last few furlongs of the massively drawn out campaign towards Thursday’s historic referendum the two sides are as polarized as ever and some worry that the massive divide that has developed in the US stemming from the rise of the Tea Party and the ridiculous cowardice of moderate Republican’s failure to stand up to them, will replicate itself in Scotland after what may well be a very close run thing. Or will it?

• Too close to call or are they lying to us?

Certainly the polls show it as being too close to call which has sent a shiver of panic down the spines of the UK establishment, and frightened the pollsters into having to admit they could be way off the mark this time round. With a lack of historical precedent the pollsters have begun to make excuses for the possibility they could be wholly out of touch with the true feeling in Scotland despite all their efforts to accurately gain a picture of opinion.

They cite several reasons for this, not least of which is a disconnect between what people are telling pollsters and how they might actually vote in the referendum. Anecdotal evidence has suggested that whilst in public people have supported the “Yes” campaign backing independence in private they’re only too willing to vote to remain part of the Union. Worse still for the polling companies this is the first major political event in which most polls have been conducted online.

Now as we all know, placing faith in the truth of things online is like walking into a bar in Kyrgyzstan gambling the locals won’t mind you being naked and screaming abuse at them in Latin. The internet warps everything that touches it like a bizarrely data driven black hole. This is dangerous territory for the pollsters and they know it already issuing statements to head off what they see as a divergent result from that that they’ve predicted.

Polling Could Be Wrong, Very Wrong

“This referendum has the potential to be a polling Waterloo.” said Martin Boon head of the pollsters ICM adding, “I think the best we can hope for as an industry is that we dodge a bullet but it’s entirely possible the bullets do start spraying our way.” But given the relatively small number of Scots that have actually been called upon to given an opinion to the pollsters they’re on very shaky ground. So much so that in recent days the bookies have been offering odds the polls simply don’t back up.

Do the bookies know something the rest of us, including the pollsters don’t know? Perhaps. In 12 out of 16 referendums held in the UK the polling figures for a “yes” vote were often far higher than the results on voting day actually represented, and the ability of pollsters to get it hugely wrong is still fresh in the minds of everyone who remembers the 1992 general election, perhaps a low point for polling companies in modern history.

Having announced their polls showed Labour narrowly winning, the large win for the Conservatives blew the concept of accurate polling out of the water in one easy electoral victory. Polling has ever since been tainted with this massive error that they blame on a “spiral of silence” in which people are unwilling to publicly support an unfashionable cause. It is worried that this will be a factor in Scotland where a “No” vote is often seen as lacking patriotism.

The pollsters are gambling news from their surveys will this time be more accurate but it’ll only be on Thursday night that we’ll actually know for sure. They’ll blame the lack of a precedent, they’ll say Scots lied to them and their surveys, but in the end the Pollsters will have no one to blame but themselves should the result be wholly different from their expectations. How their portrayal of the race might well have effected it anyway.

The energizing of the debate as a whole is only due to a single poll that showed the “Yes” vote ahead, until that point the Westminster politicians and UK establishment had barely paid any attention to what they thought of as a foregone conclusion. But whilst they had remained confident Alex Salmond had remained mobile betting that Scots could be won over to a “Yes” vote for independence with atmospheric and evocative photo opportunities.

With Scotland now supposedly almost equally divided between staying and going the media blitz on the matter has dwarfed much that has come before it. The media, of course, already dragged into arguments about bias and influence as the “Yes” campaign has accused the BBC of pro-establishment bias and a willingness to believe the scare-mongering threats of the “No” campaign despite factual evidence that counters them.

Protests against what is seen north of the border as an effort to rig the result have seen people call for the BBC to be banned, and, like a fart in a Russian poker room there is the lingering stench of Rupert Murdoch who has been teasingly tweeting about which way his publications might jump towards the end of the campaign. In the past his tabloids have run headlines like “It was the Sun wot won it” because they supported the winners of an election. A swing to “Yes” from powerful people like that might well seal the deal.

In the end this was never going to be a fair fight and the Pollsters know it which is why they’re already making excuses for their polls showing it to be such a close race. Scottish independence has the whole UK establishment using all the weapons at their disposal destroy it from lies to threats, from bias prediction to simply absurdly alarmist statements. As we enter into the final hours a “Yes” vote looks less certain that the polls suggest, but polls have been wrong, and they could be just as wrong about being wrong too.