Tolkien estate sues Warner Bros in an $80m case for using the Lord of the Rings brand in gambling. 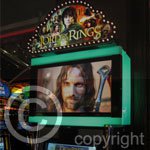 The estate of “The Lord of the Rings” author J.R.R. Tolkien and the publisher HarperCollins launched an $80 million lawsuit against Warner Brothers.

They demand money from Warner Bros. from the licensing of characters and plots from the films that have appeared at US online casinos and land gambling games.

According to American gambling news sources, the lawsuit was filed in the US District Court in Los Angeles earlier this week.

The Tolkien estate and HarperCollins is claiming that Warner Bros. and its subsidiary New Line Cinema infringed on copyrights by licensing “Lord of the Rings” and “The Hobbit” rights to land casino slot machines, as well as online and mobile gambling applications.

According to the Tolkien estate and HarperCollinsm, Warner Bros. used Tolkien’s name and brand overstepping their merchandising rights.

The lawsuit informed: “Not only does the production of gambling games patently exceed the scope of defendants’ rights, but this infringing conduct has outraged Tolkien’s devoted fan base, causing irreparable harm to Tolkien’s legacy and reputation and the valuable goodwill generated by his works.”

Two parties are seeking $80 million in damages resulting from the Warner Bros. infringement on merchandising rights that exceeded the scope of their licensing agreement.

The eagerly awaited New Zealand premiere of the film “The Hobbit: An Unexpected Journey” is a week away.