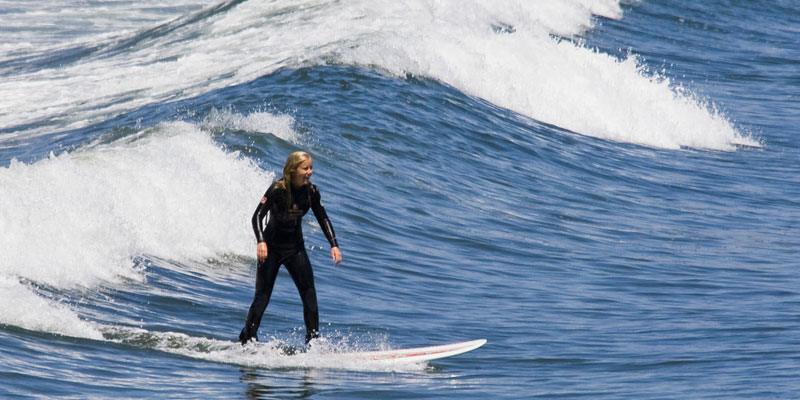 Recently, surfing is riding a wave of popularity. For the first time in history, the sport is announced to be included in the Olympic Games in Tokyo in 2020. Prior to that, the World Surf League Championship is the major event to follow.

According to legend, the ancient Hawaiian women were already riding the waves. Also, many females performed better than men. Surfing itself most likely started in New Guinea and was spreading to all the continents. Anyway, women’s surfing has made an increase in popularity over the last 50 years.

Surf is a lifestyle, and not only

One might think that surf is only about having fun. However, surfers are training extremely hard all year round. Most of these athletes are training every day not only to stay in shape. Waves are incredibly powerful, and surfers need to be stronger than that if they wanna keep standing on their boards. One thing is for sure, there is a very intense competition between the female surfers.

Female surfing is far from being boring. Every surfer has a unique style, regardless of who they were inspired by. Some love bigger jumps, others just follow the flow. Let’s take a look at the most outstanding top female surfers, some of them will appear on the Olympics as well.

1. Johanne Defay is ripping the craziest jumps in the water

The 25-year-old Johanne Defay seems to be threatening to any on the pro surfers due to her explosive moves. Although she was born in Auvergne, she is currently a resident of Reunion Island, which is certainly a much more surf-friendly spot. She had a free childhood on the island, spending most of her time on the beach.

What makes her so unique and successful you might ask. Fellow surfers describe her as a determined, hard-working, strong character. She is a truly inspirational and refreshing character. Indeed, the surfer is a true talent and proof that hard work pays off.

In order to help surfers in training, Defay designed a special skateboard. The pro model helps those who can’t sure each and every day. The skateboard was created for practicing maneuvers and turns. Probably, the practicing on the skateboard helped Defay to win the Qualifying Series in 2017.

2. Caroline Marks, 17, is the youngest pro surfer ever

What started as a competition between siblings, turned into great success. Growing up in a family with six children, Caroline Marks had to be competitive in order to keep up to her siblings. Indeed, Caroline credits her brothers to drag her into a serious surfer. They pushed her to surf harder, so she developed grittiness and determination.

As it often happens, Caroline had a sports injury some years ago. As she had a broken ankle, she was not able to compete in 2015. After returning, she proved her right in the game. After her full recovery, she won the 2016 International Surf Association Championship. In 2018, she was named WSL Championship Tour Rookie of the Year.

She is the youngest surfer selected for the USA National Team. Also, the youngest NSSA Open Women’s Champion. What’s more, Marks is the youngest wildcard competitor in history to score a spot in the 2015 Swatch Women’s Pro at Trestles. Many refer to her as the “Next World Champion.” Certainly, the prodigy is already training for the 2020 Olympics.

3. Tyler Wright had to fight for her career

Tyler Wright is the impressive two-time World Champion surfer from Australia. In 2008, Tyler was surfing as a 14-year-old wildcard. She became the youngest surfer in history to win a Championship Tour event.

Probably, her family of pro surfers was too much of a pressure. The athlete had hardships during her teenage year.  She was surfing kind of halfheartedly. It was very difficult for her to handle her favorite pastime becoming her full-time job.

Weirdly, it was her brother’s brain injury what made Tyler reconsider her career. Owen Wright was close to winning a world title when he got under a massive wave. Due to the incident, Tyler managed to put herself together. Right now, she has a stable position, and she rocks.

How could she achieve to be World number 3, you might ask. Usually, she starts her daily practice as early as 4 am in the morning. After that, she is surfing all day, and then the athlete ends the day with more training.

In 2016, the athlete launched a training program to encourage kids to lead an active life. The athlete finds it easy to connect to other surfers or surf-related people. In this sport, not only the competition is important, but relationships as well.

However, Tati West was born in Brazil, she is a resident of Kauai island. Two weeks after her birth in Brazil, her parents moved back to Hawaii. Tati’s mother is a former professional body-boarder and her father is a fan of surfing. Surprising enough, the prodigy learned surfing as late as 8, and she got her own board.

In 2018, Tati was approached by the Brazilian Olympic Committee with an opportunity to represent Brazil in a major way. A dream came true for the athlete to compete in the Olympics for her native country.

The decision was definitely a reasonable choice from the athlete. Certainly, she will have a better chance to go to the Olympic Games for Brazil than the US. Her high-energy approach, her preparedness, and motivation altogether make her a dangerous opponent.

The Surfing World League admits that Nikki is one of the best young surfers at the moment. Online sportsbook sites in Australia suggest that she is a real hidden threat from Philip Island. Nikki was 13 years old when she started competing and regularly beat up on the boys as well. The surfer is showing solid growth each year. She had her rookie year in 2014 when she turned 20.

When Nikki was still in high school, most of the time she was away from home to participate in surf events. In that period her family support was the most empowering for her. Besides surfing, Nikki van Dijk is a professional model. In fact, she received criticism for that.

On the other hand, many consider her a role model. At the age of  15, Nikki, along with two friends from her home of Philip Island took part in a movie. Actually, filmmaker Claire Gorman followed them for 12 months for her documentary First Love.

7. Keely Andrew, the Aussie in the shadow

Growing up in Australia’s Sunshine Coast, Keely Andrew spent most of her childhood in the ocean with her brothers. However, she fell in love with surfing immediately, she was also into tennis. For long, she actually seemed to be on the path of the pro tennis players. After all, her parents made her choose one sport and stick with it.

It took Keely many years and hard work to achieve a good position. Her intention is to be one of the best surfers in the world. Certainly, she is on the right track. The faster the wave, the more dangerous she becomes.

This year’s Championship Tour will be full of competition, success, and drama. Make sure you follow the season if you don’t want to miss out the greatest surf event of the year. Let’s see which one of the top female surprise will take the trophy this year.

Feel free to visit Vbet Sportsbook, where you can find the best surf betting odds ahead of the most important tournaments!