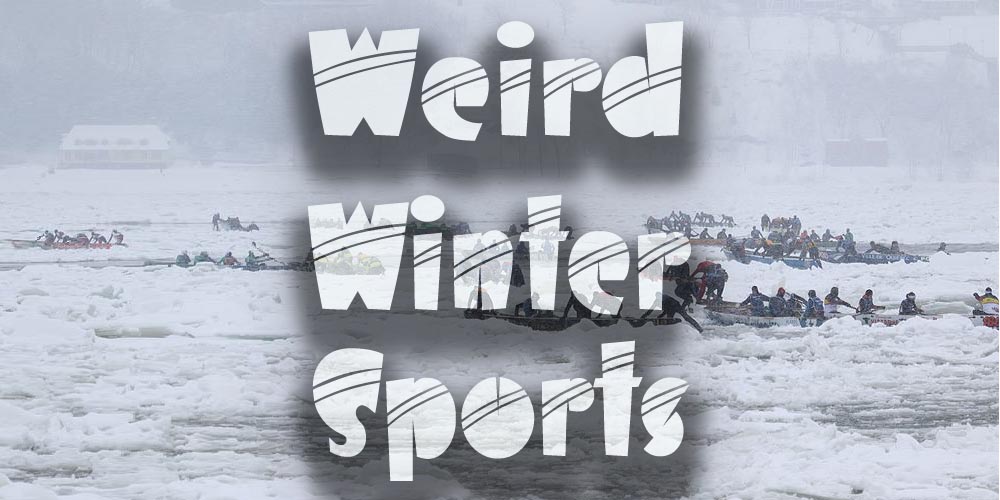 GamingZion collected 10 + 3 weird winter sports. Some of these include Olympic games like curling or skeleton, while others are just strange. Take a look at our list and enjoy the strangest people who invented unusual sports!

Weird winter sports have been around us since the beginning of time. However, we never took them seriously enough as they never intended to take themselves seriously enough either. Times might be changing now. We have picked 10 + 3 weird sports that are played during winter. Take a look at our list and enjoy the weirdest sports played in cold weather!

There is no better way to start this list. Curling is definitely one of the weirdest sports ever. However, it still doesn’t stop online sportsbook sites from letting you bet on curling matches! In curling, there is one player who tries to shoot the ball in the center of the target and knock out the opponents’ ball as far as possible in the meantime. This player gets help from the cleaning staff who make the ball go faster or slower, whichever is needed. It’s definitely one of the weird winter sports. Anyhow, if you watch enough games, you might end up enjoying it. And you can always support your nation at the Winter Olympics… It’s the best sport that includes cleaning the floor. In this sense, it is quite a unique experience.

2.  Skeleton – A Game to Lie Down While Being Fast?

Skeleton is an interesting game. First of all, it’s a sport played during winter, most of the time at least. You need ice to be able to play this game. A lot of it, in fact. The point of the game is to be fast, and get a good sleep. Okay, maybe you don’t have to fall asleep. However, you definitely have to lie down. So basically, skeleton is a sport played silently lying. On Skeleton, you have this weird little thing. You run with it on ice as fast as possible, and at the given point, you lie on it. Then you just have to go with the flow. Well, your thingy needs to go, you just need to lie. It’s quite a relaxing game actually. I partially do this every night for several hours. However, I don’t need ice to do this sport!

Click here for the best online gambling sites to see where you can bet on skeleton tournaments!

Have you ever watched a football game? Good. Have you also watched an ice hockey game as well? Better. If apart from these two, you’ve also seen field hockey games, then it’s perfect. You basically have seen the ingredients of this weird winter sport, bandy. These three are the main components. First of all, you have to play bandy on ice. There are 11 players in each team. A match lasts 2×45 minutes. The players have skates and bowed sticks, while the ball size reminds us of tennis balls. Yeah, tennis also might have been an inspiration for the game. Interestingly enough, the International Olympic Committee recognizes the game, but it is yet to be introduced at the Olympic Games. Do you think it’s going to happen any time soon?

Yukigassen is basically professional snowball fights. See, when you were just a little kid and threw around with your friends, you weren’t playing. You were training hard to be the best in the world. Even if you had no idea what you were doing. Or, well, you thought you were just having fun. No, there is no such thing as “fun”. There is only hard work, practice, and success. Especially in sports. Yukigassen originates in Japan, as all weird things in life.  There are two teams with 7 players in each team. If you hit a player with a snowball, that person is out. There are 90 pre-set snowballs. You wouldn’t believe it but there is even a special court to play snowball fight. When winter comes – and we all know it’s coming, thanks to HBO – we shall all go out and play do some professional sports.

Snow boating is also known as Snow kayaking. Based on this, you can already guess that mostly kayakers do this kind of activity. It’s quite entertaining to watch people snow boating. You need a ski resort or a backcountry area with lots of snow if you wish to snow kayak. You can go as fast as 72 km per hour. It sounds rather terrifying if you think about it. 70 km/h down the hill on a rocky and snowy mountain, with who knows what else is about to come… It might not be the best of ideas. But hey, doing sports is healthy, that’s what they keep saying all the time!

Ice Canoeing is quite similar to Snow boating or snow kayaking. However, there are a few important differences. Obviously, for snow kayaking, you need a kayak. In a kayak, you can be alone, or with a partner. In snow boating, you go down the hill. For ice canoeing, however, you need a proper team and a canoe. In addition, you need a frozen lake. When there is some water, you’re just driving your canoe. However, when the lake is frozen, you need to jump out and run with your canoe as fast as you can. Up until you reach water again. Then back and paddle again. Keep interchanging these until you reach the final destination. And of course, the best time wins!

There are similarities between shovel racing and snow boating as well. However, at shovel racing – as the name suggests – the machine you’re racing with is not a kayak. It’s not a boat. Your equipment is a shovel. You sit on the shovel and you go down the hill. As fast as humanly possible. You put the shovel in between your legs, you sit on it and you go. It’s quite dangerous – especially for men. Anyhow, if you want to compete in a shovel racing tournament, you don’t need too much. You just need a shovel and a huge mountain with lots of snow. If you have these, then you’re good to go!

The time is far away when online sportsbook sites will offer skijoring odds. However, it can quickly become a more popular game. First of all, because it looks like it’s super fun. However, there are certain CONs as well. For example, the huge amounts of risks you take when playing Skijoring. So, it started off as the cold equivalent to water skiing. You need skis. Then you need a rope around you. And you need something – or someone – that pulls you. At first, it was a horse. However, horses are not as fast as cars, so why not tie yourself to a car and let it pull you? Imagine running on ice by the speed of a car. That is skijoring. Taking a turn can be slightly dangerous, especially when there are other skijoring racers around you. But you already took the risk, so, why not do some more?

9.  Weird Winter Sports – What Is Skibobbing?

Have you ever looked at your bike sadly, and wondered why you can’t ride your precious in the snowy mountains? We all had that feeling; we all know what it’s like. Skibobbing helps us forget about those sad, sad moments. It’s not biking. It’s turning your bike into a bob. So, imagine your bike, you sit on it the same way, you turn the steer the same way. However, instead of wheels, you have skis. Kind of. You wouldn’t believe it, but the origins of this sport date back to 1892. That’s when the first skibobber has been caught in the Alps. Since 1967, there is even a World Championship

10. Sports Played During Winter – Skiing Combined with Parachuting, that is Speed Riding

You probably hear about paragliding and parachuting before. Now speed riding is something similar to these activities. However, for parachuting and paragliding, you don’t need to have ice, cold, and skis. If you wish to exercise speed riding, you need all of these. Speed riding is gaining popularity in recent years – even Red Bull started promoting this game. They promote many adrenaline sports, so it might not come as so much of a surprise. When speed riding, you ski in the snowy mountains across all those dangerous rocks and everything. When neither left nor right is the right choice, you can just decide to fly. It could be huge amounts of fun; we’d recommend trying it. Nevertheless, please only do it under the right and (relatively) safe circumstances, of course.

So, the list above was our top 10 list of weird winter sports. However, those are not the only strange sports played during winter.

Snow Golf – Who Said Gold Landscapes Needed to be Green?

First of all, we must mention snow golf. When you think of golf, you can think of the beautiful green landscape. Snow golf is the same, but you need to replace the green image with white, and the grass and trees and lakes with snow and ice. Snow golf has been around since the 17th century. However, we still can’t support our favorite snow golf players at the Olympics. Maybe one day we will see the White Tiger Woods.

Tired of Walking or Ice Skating? Hop on Your Bike! – Cold-Weather Biking

Again, cold-weather biking is a rather simple sport. All you need is a bike and cold weather. Preferably a lot of snow and ice to make it more difficult and dangerous, and hence, funny. Of course, your bike will need wide wheels in order to resist the conditions as much as possible. The more hardcore players can just take the old bike from grandma’s storage room and go with that one.

Okay, so when you go fishing, you sit next to a river, lake, sea, or anything water outdoors. Fishing becomes a bit harder during winter when it’s super cold outside. It’s not so much of a problem at the sea or at giant rivers. The flow makes it impossible for the water to freeze. However, the lake can freeze. And that’s the time to do some ice fishing. This sport is rather popular in Finland and North America. However, we don’t recommend it. If the ice is not thick enough and you go down and “become the fish”, others might never catch you. And that’s not fun.