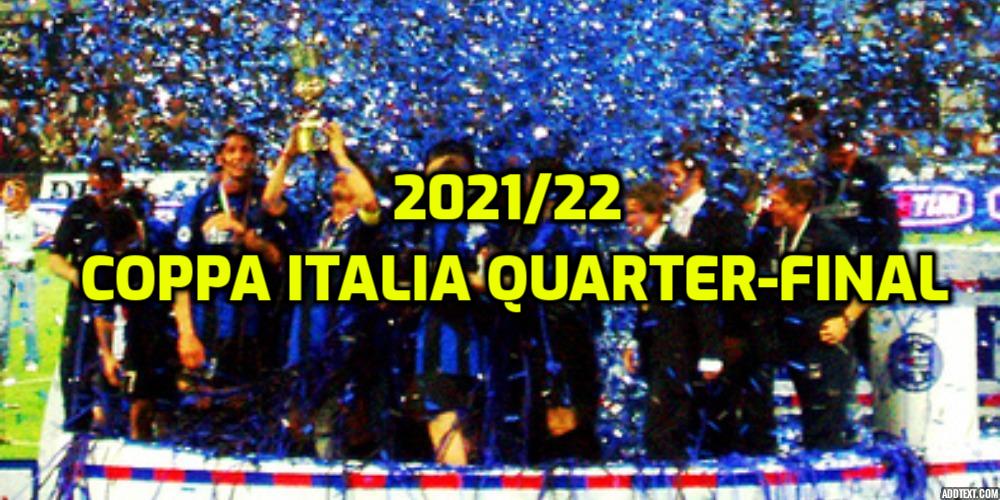 Only eight teams are left in this season’s Italian Cup, including the defending champions, Juventus. They will host Sassuolo on Thursday night but fans can also see two Milan-Roma derbies this week. Along with the Atalanta vs Fiorentina tie. The 2021/22 Coppa Italia quarter-final predictions favor the hosts in all four matches, let’s see the odds now.

Only top-tier teams are left in the 2021/22 Italian Cup, after the last lower-ranked club, Lecce was beaten by AS Roma in the previous round. So hopefully we can some exciting games in the quarter-finals, with current Series A leaders Inter hosting Roma. AC Milan will play against the other top team from the capital, Lazio. While last year’s cup winner, Juventus will face Sassuolo in Torino. By the way, Juventus are also the most successful club in the history of the cup with 14 trophies. The tightest game can be the match between Atalanta and Fiorentina, but really any result can happen at this stage. The matches are held between Tuesday and Thursday, with only one match deciding the winners.

The current Serie A leader Inter Milan will play the first quarter-final this Tuesday against AS Roma in the San Siro. Simone Inzaghi’s team has just lost an important match against AC Milan at the weekends, so they would need a win against Roma to bounce back. Which can easily happen as Jose Mourinho’s Roma has been struggling this season again. The team is currently in 7th place in the championship, so need to improve to finish at least in the top 6. The Wolves lost their last game against Inter in December and only draw at home against Genoa this weekend. No surprise that online sportsbooks in Italy favor Inter for the win with the odds of 1.57.

The 2021/22 Coppa Italia quarter-final predictions also expect their city rivals, AC Milan to win against Lazio on Wednesday night. Stefano Pioli’s team is only a point behind Inter now thanks to their 2-1 victory but Inter has a game on its hand. Still, the Rossoneri can catch them and win their first title in 11 years. But they can also aim for the cup trophy this season after defeating Genoa in the previous round in extra time. Lazio can be another tough opponent though, with the team playing well this season. They are in sixth place in the championship and won their last game in the home of Fiorentina 3-0. Ciro Immobile has already scored 17 goals in the league and is in top form. Lazio’s odds to win against Milan are 4.20, while the home team’s victory has the odds of 1.80 on bet365.

The Defending Champions are Favored to Reach the Semi-Final

Both of last year’s finalists, Atalanta and Juventus will play their quarter-final games at home. The Bergamo team will host Fiorentina on Thursday with the odds of 1.70 to win the match. Gian Piero Gasperini’s team is in fifth place in Serie A, but they haven’t won for a month now. While Fiorentina is 8th in the table and hasn’t been in top form either.

The guests also beat Atalanta in their league game back in September but they lost their key player, Dusan Vlahovic since then. The Serbian striker, who scored 20 goals this season was signed by Juventus in the January transfer period. So now a home win is expected, with Duvan Zapata being a potential goalscorer for the home side.

In the last quarter-final, the 2020/21 Coppa Italia winner Juventus will play against Sassuolo. Massimiliano Allegri’s team is only fourth in the league, 8 points behind Inter, so another Serie A title seems unlikely. But the Zebras can still win the cup for the 15th time in the club’s history. First, though they need to win against another Serie A side, who are in 12th place in the table at the moment. Online gambling sites in Italy favor Juve for the win with the odds of 1.50. But they can’t underestimate their opponent, who managed to beat them in their league game last October. Another Sassuolo victory would be a huge surprise though and has the odds of 6.00.