Atlantic City’s Fishy Endeavors On The Boardwalk Based On Bass 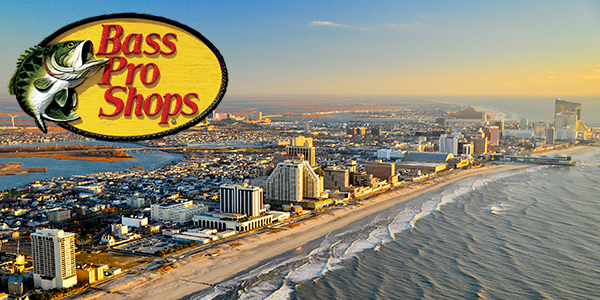 Bass Pro Shops is at the hub of Atlantic City’s strategy to branch out into a broader-based tourist destination by adding new retail, dining and entertainment.

Something fishy seems to be going on in Atlantic City, and it has nothing to do with casinos for once. Ever since the closure of 4 casinos in 2014, developers and government officials have been trying to find solutions to generate income. Well, it seems that someone with a fishy sense of entrepreneurship has come up with a great idea. Indeed tourists may be flocking to Boardwalk soon but it won’t be to bet in casinos in Atlantic City, as is allowed under US gambling laws, but simply to hunt and fish at Brass Pros Shops, the retail stalwart that specializes in hunting, fishing and the outdoors.

Mayor Don Guardian said “We expect more than three-quarters of a million people to visit the store annually. I think it’s the start of the diversification of the city beyond casinos that we began to talk about last year. This is the start of the new look for Atlantic City”. He said visitors who come for the store will stay for dinner and entertainment, adding that “I’m sure they’re going to love our city, too”.

The store’s general manager, Eric Clements, predicted that in Atlantic City, 1.2 million customers would show up annually, a number that would make it a top attraction for the resort. Clements said a day before the opening “I would be amazed if we didn’t hit the average, especially with the good weather we’re expected to have”.

And he was right for come they did. As the crowds surged at the door, minutes before the opening, Bass Pro Shops founder Johnny Morris shouted “Anybody here like to hunt and fish?” to which the crowd shouted an enthusiastic “Yeah,” getting a “We do, too. That’s why we have this shop” in response from Morris. The Atlantic City store is the first in New Jersey for Bass Pro Shops.

Although only 2,000 people of the 15, 000 predicted, showed up at The Bass Pro shop during the grand opening on Wednesday, store officials still think that the shop remains a potential leading shopping attraction of Atlantic City. For, it is strategically situated the end of the Atlantic City Expressway, beside the Tanger Outlets The Walk shopping and entertainment district.

Famous People invited to the glamorous opening included Tony Stewart and Martin Truex, from New Jersey, both NASCAR stars. Hunting and fishing moguls such as Jimmy Houston and Kevin VanDam, gave an appearance to boost the energy and sign autographs. Also in the star-studded line up was Brian Westbrook, retired from the Philadelphia Eagle. Miss America 2015 Kira Kazantsev and Miss New Jersey 2014 Cierra Kaler-Jones also showed up as well.

Some ordinary people too traveled from far and wide to the store. Kelly and Michael Fantacci, from Oakdale in Connecticut, drove for nearly five hours from southeastern Connecticut, to Atlantic City which is around 300 miles away. Another couple, Brian and Christine Brown from Glassboro, Gloucester County had their 17-year-old son, Briar, tag along to purchasea fishing rod, in what will appear to be a somewhat long shopping trip.

David Eshelmen, of Cape May, and his nephew, Bob Peace, of Toms River, looked fishing lures up and down. Both said it was not unusual for them to travel to Bass Pro stores outside Baltimore and Harrisburg, Pennsylvania, to get fishing supplies. Peace said “We used to drive three hours for the other ones. It is worth the 45-minute ride.”

These people are proof that shows how much attraction Bass Pro stores has for die-hard fans.
One of the main attractions of the store is the indoor pistol range situated in the upstairs quarters. Staffers told US gambling news reporters that annual membership cost between $200 or $250 for families. Visitors could shoot for $16 an hour or $8 for half an hour.

Bass Pro Shops, is far from being a group that attracts gambling loan sharks, but is rather one of Atlantic City’s main market strategies set up to attract tourists. For, no doubt, Atlantic City is looking to replace some of the gamblers who were lost when the Atlantic Club, Showboat, Revel and Trump Plaza casinos closed last year, which left 8,000 people unemployed.

Chairman of the New Jersey Casino Control Commission, Matthew Levinson, said of Brass Pro shops that “it has already has created 200 jobs. This brings another element to Atlantic City, in addition to gaming and dining. It’s not just a store for people who hunt and fish. It will also bring people who can stay here and enjoy themselves with the other attractions the city offers”.

The Casino Reinvestment Development Authority, the state agency that is responsible for the Atlantic City tourism and development projects, lent $12.3 million to aid in financing the store’s estimated $15 million construction cost. Bass Pro is set to receive $11 million more, in tax rebate, over an 11 year period.