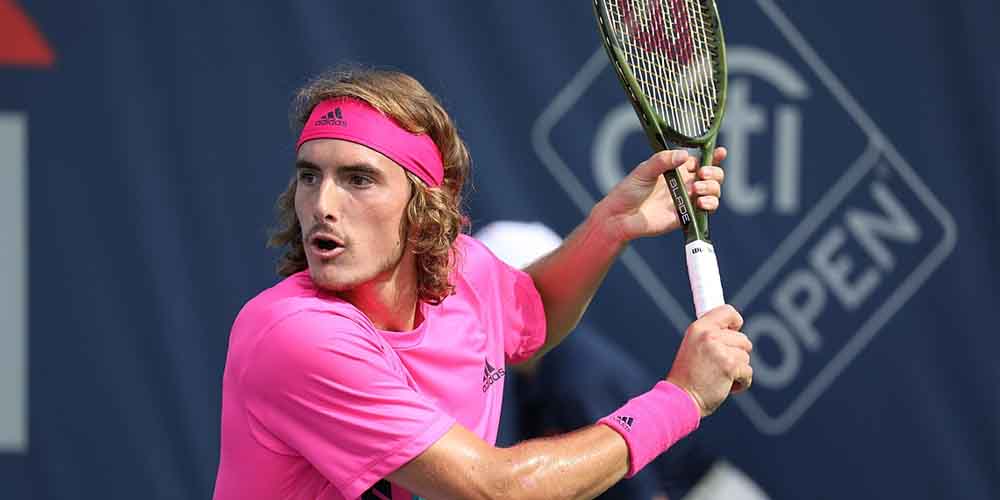 Though the 2021 Wimbledon Championship is over, the ATP Tour continues this weekend with several events. One of them is the 2021 Hamburg European Open between the 12th and 18th of July. Several top players are taking part in it like Stefanos Tsitsipas. Who is the top favorite in the ATP Hamburg winner odds.

Sunday was another key moment in the history of tennis. As Novak Djokovic won his 20th Grand Slam title in Wimbledon. And equaled the all-time records of Roger Federer and Rafael Nadal. The Serbian player was outstanding again and no one could stop him during the tournament. But a few other top players, like Medvedev, Zverev or even Federer had a less impressive run. While world No4 Stefanos Tsitsipas was knocked out already in the first round. Now the Greek can get a better result in Hamburg, where the next ATP Tour event is held. It is played on an outdoor clay court which might suit him better than grass. We can also find other great players to fight for the trophy in the 115th edition of the open. But the defending champion Andrey Rublev won’t compete this time.

Stefanos Tsitsipas has been playing in great form this season after winning his first Masters 1000 title in Monte Carlo. And reaching his first Grand Slam final in the 2021 French Open. In spite of losing there against world No1 Novak Djokovic, Tsitsipas moved to a career-best fourth place in the world ranking. But in the 2021 Wimbledon Championship he lost already in the first round against American Frances Tiafoe. Now the Greek player can get back to winning in Hamburg where he reached the final last year. He was defeated then by Andrey Rublev but the Russian is not playing this year.

Online sportsbooks in Germany favor Tsitsipas to win his third clay title of the season with the odds of 1.895 according to 22BET. One of his biggest rivals can be the second seed of the tournament, Pablo Carreno Busta. The Spanish player is also good on clay. He won the 2021 Andalucia Open in Marbella and reached the semi-final in Barcelona. The world No12 also got to the semi-final in this tournament two years ago, where also Rublev defeated him. Now his odds to win in Germany is 7.80 according to the ATP Hamburg winner odds.

Another Spanish player, Albert Ramos Vinolas won his third ATP title on clay in the 2021 Estoril Open.  Where he defeated British player Cameron Norrie in three sets. Ramos also reached the final in Cordoba this season, but lost there against Argentine Juan Manuel Cerundolo. As his only Masters final is also from clay, from the 2017 Monte-Carlo Masters, we can definitely mention the world No38 in the favorites.

Along with German player Jan-Lennard Struff who will be supported by the local fans. The world No45 reached the fourth round in the 2021 French Open and the final of the Bavarian Championship back in April. Where he lost against Nikoloz Basilashvili who will also compete in Hamburg now. The Georgian player has already won this tournament twice before, in 2018 and 2019. The world No28 also won the Qatar Open this year after defeating Roger Federer and Roberto Bautista Agut on his way. Now online gambling sites in Germany offer the odds of 19.00 for his victory. While Struff’s odds are 18.00 for winning on 22Bet.