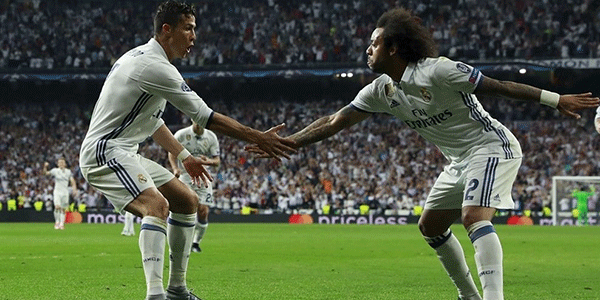 Last week’s encounters in the first leg of the quarter-finals seem to already have the semi-finalists of the Champions League, but then again miracles have happened in this elite competition of our before. That’s why it might be worth taking a moment of two before placing bets for the return legs this week with online sportsbooks in EU.

The Catalan giants enjoy a massive lead having won the 4-1 at the Nou Camp last week, so we’re doubtful the Italian side will score three goals without conceding any themselves. This is a no brainer of a bet, which could be useful if combined with one or two other sure bets with a high wager.

(Check our review on Bet365 Sportsbook for more info about the online betting site.)

Barcelona are one of the main favourites to lift the trophy this season, but it’s still not clear whether they’ll actually accomplish that mission. Especially since Liverpool have emerged as a serious challenger in the Champions League recently.

The Reds sealed a remarkable 3-0 win at Anfield after the first 30 minutes of the game in the first leg, so if Klopp keeps his cool all they’ll have to do is defend that lead at the Etihad this week. Man City are the favourites for the game, but we’ve seen them lose to their cross town rivals Man United in front of their home support over the weekend, so cracks are definitely showing.

This is why we’re considering betting on a draw between the two for this encounter, otherwise we would have normally bet on Pep Guardiola’s men to seal an easy victory, due to their great performances this year.

Bayern have a 2-1 lead over their Spanish counterparts, and the best part for them is that they’ll play at the Allianz Arena for the return leg, meaning they have all the factors working in their favour. So it’s no surprise Die Roten are favourite to win this game as well, per providers of internet betting in Germany. Since the odds are so low for this match, you might want to bet on some of the other markets of this thrilling Champions League round.

Two strikes from Ronaldo – one of which was a memorable overhead bicycle kick – and one goal from Marcelo during last week’s visit to Turin, practically ensured Real Madrid’s progression to the semi-finals of the elite competition. The defending champions are on a mission to make it three straight European titles – a feat that hasn’t been done since Bayern Munich’s triple triumph in the 1970s (1974, 1975 and 1976).

It’s going to be really difficult for Juventus to make a comeback against such a strong side, especially since they’ll be playing at the Bernabeu. With odds bring pretty good for Los Blancos, we say bet all on this match!