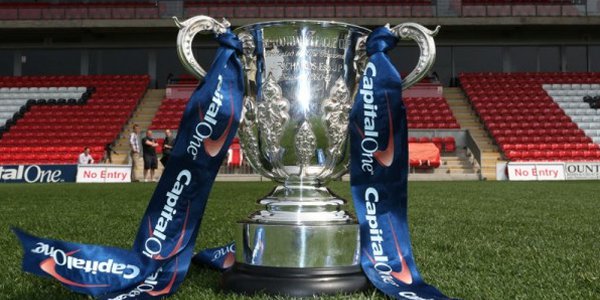 Capital One Cup third round descends on the British punters this week, keeping them busy between Premier League weekends.

Following quite an eventful European football week with Champions League and Europa League, and in addition to a busy Premier League weekend, it’s now time for Capital One Cup third round matches. The current holders are of course Manchester City, who’ve made it their 3rd crown, but the absolute leaders are Liverpool with 8 titles so far.

• There are some unexpected underdogs with great prices on their wins

The competition previously known as the League Cup started in 1960 and involved 92 teams from all tiers of English football. The peculiarity of this particular Cup is the unexpected results when Premier League teams battle squads from 2nd or even 3rd or 4th tier and lose, making betting under British gambling laws that much more exciting. This is what happened to Manchester United, who lost 0-4 to MK Dons in the second round.

Today and tomorrow there’s an array of interesting matches played by various teams. Naturally, all of them are covered by online sportsbooks in the United Kingdom with a long list of highly rewarding betting offers. Let’s check out the most promising ones.

Southampton, in the second spot behind Chelsea, are actually leading Arsenal in the Premier League table with a single point and two places between them. But those who bet on sports in the UK will still feel that the Saints are the underdogs in this match.

Nonetheless, Southampton are on excellent form going to the Emirates, and might pretty much surprise everyone including the Gunners and their manager. Betting in favor of Southampton might be a smart move ahead of tonight’s game in case punters are looking for some quick money.

Saints’ manager Ronald Koeman has already revealed during the previous round against Millwall, that he will be playing a strong side in this competition. Arsene Wenger on the other hand is renowned for his deep alteration of the team when it comes to the Capital One Cup. Players that don’t usually make the starting squad are expected to appear tonight, causing unfamiliarity to the team and fans and possibly bearing a high cost for Arsenal’s hopes.

Bet365 says Arsenal are favorites with 1.85 odds to defeat Southampton, while the Saints get a much longer and thus more attractive line of 4.00 to produce a surprise. The draw stands at 3.75.

These two teams are both in the Championship and are actually locked up on the same amount of points, making the upcoming match and interesting affair to bet on. During the weekend the Rams had to fight back the two goals to grab a single point against Cardiff at home. And considering the fact that they’ve lost the playoff final last season and failed join the Premier League, their Cup ambitions will be that much higher this year.

Reading beat Newport 3-1 in the last round of Capital One Cup, and even the weekend loss to Sheffield Wednesday didn’t put a shadow on the fact that they’ve won their last three matches. They’re obviously trying to impress their brand new Thai owners, since Mr. Zingarevich decided to sell his 51% stake in the club.

Online bookies favor the home team in this fixture, but Reading could come through and beat them backed by their recent success. Bet365 gives Derby County a line of 1.70 to succeed, while Reading got 4.75 odds and the tie pays at 3.75.

These two sides meet regularly in the Premier League as well, but how is the upcoming match different? Well, the betting lines of course. Everton are actually considered to be underdogs here, which will probably not be the case if it was a Premier League game.

The Swans were defeated by the Saints last weekend and lost Wilfried Bony to a red card. And this is another factor to support betting on the Toffees, not the home team. Everton need to get on form and do it quick, the Merseyside derby is this Saturday, and there will be no excuse then.

The Capital One Cup was amazing for Burton, when they’ve beaten Wigan and QPR, but then they’ve suffered back to back losses at Wimbledon and Bury. But Burton are back at the Pirelli Stadium and their opponent, Brighton failed to win a single game in four tries after the last round of Capital One Cup.

It’s clear that the three times finalist and two times winner of this competition, Sami Hyypia will not be enjoying this particular trip. Brighton manager will surely do all in his power to put in a good performance this week, but he might end up wishing to forget the match.

Surprisingly enough, Bet365 have Brighton as the favorites for this fixture with 2.08 odds, giving the home team only 3.40 to win and offering the same odds for the draw. But backing Burton seems more prudent here, and will actually result in a better payout should they win.

The Spurs aren’t exactly enjoying the best of seasons in the Premier League currently in 10th spot with 7 points from 5 games, but they’re split between home league, Europa League, and of course the domestic cups.

But in case of Nottingham Forest they seem to be concentrating their efforts on the league, and will certainly use that excuse should things go terribly wrong at White Hart Lane. On the other hand, Tottenham just suffered a pretty humiliating defeat to West Brom, and are surely not in the best of spirits.

In addition to losing two of their three home games in the Premier League this season, the Spurs have not scored in three of their last four games. This certainly influences the odds at online bookies, and gives a slight edge to clever punters backing Nottingham Forest.

According to Bet365, the Spurs are still the favorites with 1.57 odds, but the line of 5.75 for Nottingham Forest seems pretty attractive and even the 4.00 odds for the draw are rewarding.