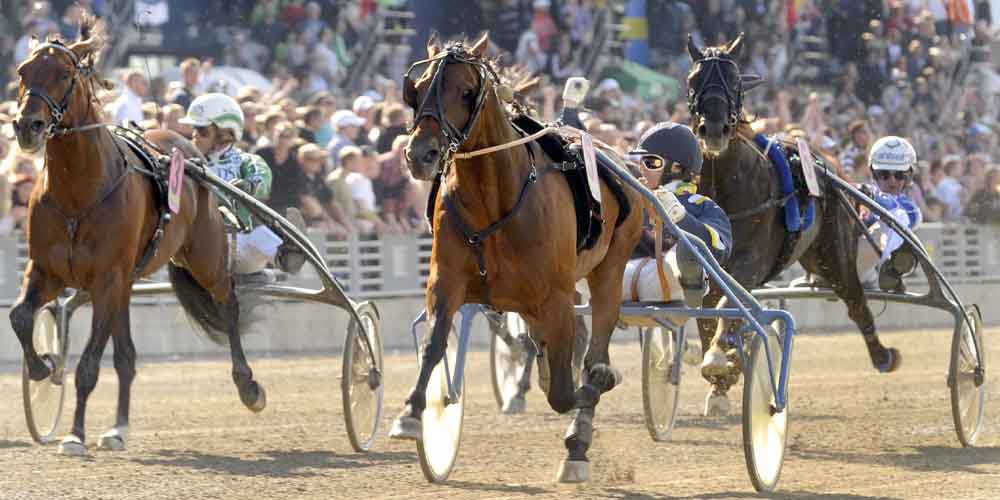 The Elitloppet is not just one of the greatest trotting events in the world, it is also a kind of folk festival, much like the Little Brown Jug in America. The annual, invitational Group One harness event takes place at Solvalla Racetrack in Stockholm and attracts between 40,000 to 50,000 people over the last weekend in May. And Elitloppet 2021 betting predictions are already available online.

It’s fair to say Sweden is the home of trotting, hosting some of the biggest races in the world. And there is no bigger race in Sweden than the Elitloppet, the world’s biggest sprint race for older horses. 16 horses compete in two eliminations run over a mile with eight horses in each. The top four in each meet in the final, where the winner in 2020 took home prize money of 573,000€. The race is invitational and tends to have an international flavor, and often has American, French and Italian trotters in the line-up.

In trotting, horses pull carts, a bit like gladiator chariots, know as ‘sulkies’ or ‘spiders’. The horses’ race using a specific gait, the pace being dictated before the race gets underway. It all ends with a thrilling sprint, the horses charging when close enough to the finish line – even with the sulky, horses can reach speeds of up to 30 miles an hour. So if you’re a horse racing fan and fancy a flutter on something a little different, Elitloppet 2021 betting predictions at various online gambling sites in Sweden will give you odds on the favorite and the field.

France is home to the toughest and most prestigious harness race in the world, the Prix d’Amerique. With a seven-figure purse, the winner not only becomes an instant trotting legend but also makes their owners seriously rich. And not far behind is Sweden’s Elitloppet. Its honor roll includes Italian trotter Varenne, rated by many as the best trotting horse of all time. In 2002 Varenne set a world record time here of 1:10.4 in the elimination round, and then immediately went one better by winning the final in 1:10.2, the fastest mile ever trotted around three turns.

How do you Bet on Trotting?

Wagering on Swedish trotting is not much different from wagering on other types of horse racing. Betting products are unsurprisingly similar to those offered on other horse races, with punters able to bet on race winners and placegetters for example. Savvy punters read into the form when parting with their cash, and trotting is no different. If you are new to horse racing, check out How To Bet On Trotting and Other Forms Of Horse Racing.

Swedish gamblers, however, and not just the trotting fans, love the V75 game. Sweden’s own multi-race exotic wager, it challenges punters to pick the winners of seven Swedish consecutive trotting races. As each race must have at least a dozen competitors, a V75 game featuring seven races with 12 joint favorites gives odds of getting the right combination at greater than 35 million to one (twelve to the power seven). So essentially, it is a trotting lottery. And because of this, it is common for punters to play large systems rather than rely on one single bet. Elitloppet 2021 betting predictions at online sportsbooks in Sweden also show you many of the horses you can bet on in the V75.

There are dividends for punters who predict either five or six of the first-place finishers. But the real attraction is that prize monies can be enormous. The jackpot is pooled if no punter selects all seven race winners. And as with other types of lotteries, the bigger the pool, the more people that play. Currently, punters in more than 25 countries can bet into the V75 pools, but many punters do not know the first thing about Swedish trotting form, they are investing in it like a lottery. So why not try your luck? There are 9 million people in Sweden and every year 2 million people will bet on the V75. Few people in Sweden know someone who has won the lottery, but most know someone who has hit the V75.

Elitloppet 2021 betting predictions for the next to take the crown

Last year’s winner was Propulsion from Sweden. You can read here 2020 Elitloppet Predictions and Betting Tips about how at 17/2 he caused an upset for the 5/1 favorite Face time bourbon. This year, however, Face Time Bourbon is back as a favorite. The 5-year-old French trotter won the prestigious Prix d’Amerique comfortably at Vincennes in January, taking the winner’s purse of $445,000. It is only the third time within the last 25 years that a 5-year-old trotter has won the race. He has raised €1.6 million as of February 2020 from 25 starts, with 21 wins and 3-second places. 22Bet sportsbook is offering odds of 6.25 for him to win this time around, and 2.31 to finish in the top three.

He may however see a challenge from Ecurie D.at 7.5 to win or 2.625 to finish in the top three. Having competed since April 2019, he has run in 10 starts, all 10 of which have been wins, including European three-year champion  2019. Unbeaten so far throughout his racing career, he is considered one of Europe’s best trotting horses. Check out online sportsbooks in Sweden to see what other odds are available for the 2020 Elitloppat, or find sites where you can place a bet on the V75.