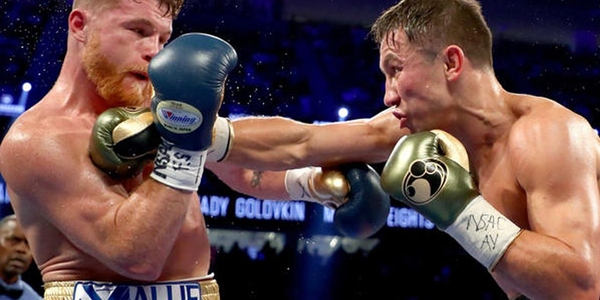 The Long-awaited world middleweight title rematch between Gennady ‘GGG’ Golovkin and Saul ‘Canelo’ Alvarez has been confirmed to take place on 5 May. Although three months left for the fight, it is worth to set a first sketch on the Canelo Alvarez vs Gennady Golovkin rematch predictions.

As soon as the Rock confirmed that the ‘Canelo’ vs ‘Triple G’ rematch is truly happening, online sportsbook news around the world responded by showing how the fans and experts are thrilled to have another chance for the kind of satisfying ending that everyone was denied on last September. The second meeting of the two most impressive figures in the boxing ring aims to settle out the past controversial draw. Our early stage Canelo Alvarez vs Gennady Golovkin rematch predictions stand with no more draws, but a knockout is unlikely to happen since both fighters are equally powerful.

The first fight that was a cross between a war and a truly high-level tactical boxing match took place in Las Vegas on Sept 16. The two fighters demonstrated extraordinary endurance and courage for 12 rounds, and then they had to wait their fates to be decided by three judges. One judge scored the fight 118-110 for Alvarez, another 115-113 for Golovkin and the third a 114-114 draw.

According to online sportsbooks in the US fans and experts generally agreed that Golovkin deserved a decision, and perhaps a wide one. Golovkin forced Alvarez to move backward most of the time, sometimes all the way back to the ropes. But Canelo is well known for his counterpunch technique, and the judges perceived the fight as Triple G landed the most punches, while Canelo landed the most effective punches.

Golovkin, 35, holds the WBA, WBC, IBF, and IBO belts, and he is unbeaten with a 37-0-1 record including 33 KOs. ‘Triple G’ is considered by most of the boxing experts as the No. 1 fighter in the sport. He is powerful and aggressive, able to inflict enormous damage to his enemies. Yet in the last fight his punches weren’t destructive enough, many assume that he is slowing down due to the age.

Alvarez, 27, is 49-1-2, with his only loss coming against Floyd Mayweather in 2013, and he has (34 KOs). The Mexico’s former two-division champion is fast and slick. He won the first three rounds but somehow he faded in the middle rounds and had trouble to keep up with Golovkin. His next mission is to win back the public, which viewed Golovkin not only as the rightful winner, but also “more Mexican” in style.

Who will dominate the next fight?

Many factors will play role in determining the winner. We look into two important ones. First factor against Alvarez is that he is smaller as in recent years he was mainly competing at or near junior middleweight, a hundred and fifty-four pounds. This fight was held at middleweight, one-sixty, which is Golovkin’s longtime division.

The other factor is the location and it is not clear yet on which side it stands. There are two proposed locations for the fight to be held, one is the T-Mobile Arena in Las Vegas. Nine of Alvarez’s last 12 fights have been in Las Vegas. The other location is the Madison Square Garden in New York, where Golovkin built his fan base by winning five bouts at MSG.

To set the definite Canelo Alvarez vs Gennady Golovkin rematch predictions is not an easy task. At Bwin Sportsbook ‘Triple G’ is the favorite with odds standing at 1.53, while the odds for Canelo are 2.50. Take your time to pick the winner, but do not bet on another draw, as the world middleweight championship no longer can be split in two.