Explore Gambling In Cinema Through The Ages (or Genres)

Gambling in cinema is far more common than at first you might think. From Clark Gable in Any Number Can Play, to Tom Berenger in Platoon, actors often portray gambling. Sometimes it is mere window dressing, texture to the visual experience; often it plays a more central role. From the flouting of US or UK gambling laws, to the moral comeuppance of the unworthy, cinema loves gamblers. Whether modern day bookies like Bet365 like cinema is another matter. 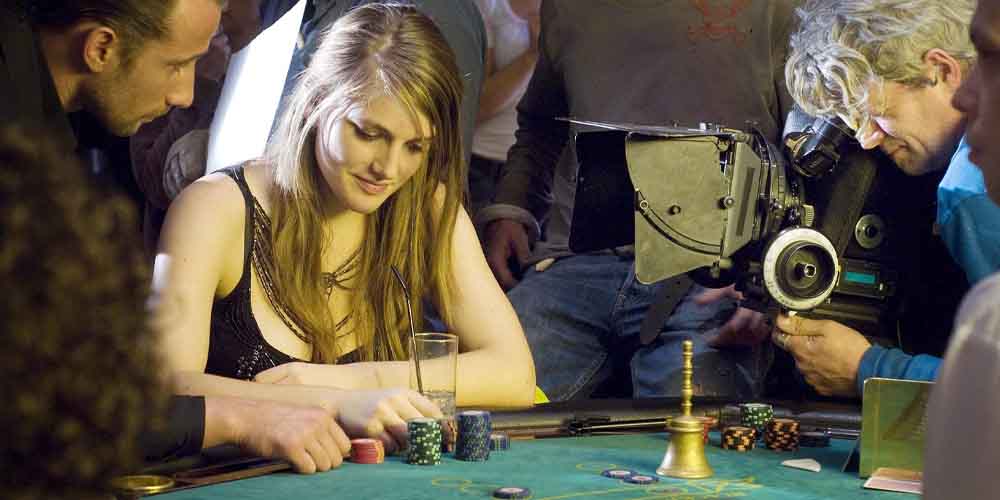 So nothing would seem further removed from the high tech era of modern online internet casinos. The sweeping epics of cinema, however, both use gambling as tension creator and plot device. Telling tales of the ancient world directors created as much jeopardy in Ben Hur as in any casino movie. Indeed, it is in one of these swords and sandals features that gambling at its most base is the entire motivation. So gambling in cinema help transcends time as a familiar touchstone for audiences.

The Epic – Sword And Sandals Gambling In The Ancient World

This is easiest to see in Westerns. Whilst directors often subject gambling in cinema to a moral tether, in a saloon all bets are off. The bad guys might play poker but the professional gambler is no more criminal than you are. A charming rogue from riverboat to frontier town the gambler in a Western has a get-out-of-jail-free card from audiences. Gambling in cinema is rarely so fairly treated, or so romantic. So from Bret Maverick to Paint Your Wagon it always seemed laden with charm.

The prohibition era of the early 20th century created nearly as many problems as it solved. Some of the most famous scenes of gambling in cinema take place in these more seedy venues. These were hidden away from the authorities, at risk from rivals and always bent. They provide a warning to audiences that have never stopped them putting a bet on sports in the UK. The speakeasy reality tempered perhaps by the likes of Humphrey Bogart in Ricks Café American.

The Speakeasy – Backroom Casinos Of The Early 20th Century

So gambling in cinema is commonplace, espionage in casinos far less so. Very little, however, has endured quite so long as the British secret agent, James Bond. One of the very secrets to his success is the constant return to the world of casinos. Audiences have come to expect gun totting spies in tuxedos roam every casino in the world, each one of them just like Monte Carlo. Reality cast aside, this is a representation of gaming sites, like Bet365, both love and loathe in equal measure.

The Spy – Espionage In Casinos From James Bond To 007

Not that James Bond is the only thug that gambling in cinema represents. The connections with organized crime are often explored. This is done very differently from one side of the Atlantic to the other. One only need taking at Scorsese’s Casino to see one attitude, and Mike Hodges’ Get Carter to see the other. The different cultural expectations of audiences starkly contrast so much twixt the two. Their inevitable remakes never quite doing as much justice to the theme as they did.

It is ironically only when larceny is introduced that gambling in cinema gets another fair shake of the stick. The evolution of the casino robbery movie demonstrates shifts in society and what an audience will accept. They have moved from cautionary tales of vice to the interwoven stories of victory. This has removed some of the seedy tint from online betting sites in the UK like Bet365. Today the glamourous gamblers of cinema are not Kubrick’s shady characters but Soderburgh’s rough diamonds.

The Thieves – The Evolution Of Casino Robbery Movies

The fascination with gambling in cinema extends into the most unlikely places. Tom Cruise takes Dustin Hoffman to a casino in Rainman; as far removed from The Hustler as you care to get. From Smart Money in 1931 to The Color Of Money in 1986, it has simply always been there. It shall continue to do so. Both savior, as in Operation Petticoat, or devil, as in The Killing. So, the next time you hit up Bet365 your favorite of the online sportsbook sites in the UK, remember it’s only a matter of time before Hollywood deals with that gambling too.

We take a look at gambling in cinema by looking at how the different genres treated it over the years.