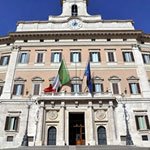 Gambling in Italy is in turmoil as the Italian Parliament has passed a motion instructing the government to ban gambling for 12 months. The urgent ban covers both online and land-based casinos and gambling systems that are in public areas, and seems to be in direct confrontation with EU rules.

Italian gambling laws have been notoriously tricky to maneuver in the past, but with most forms of gambling legalized in the country, and Texas Hold ‘Em recently recognized as a skill game, it was thought those times were behind the Mediterranean country. Instead, this extraordinary motion has been passed in parliament; something that the Ministry of Finance has declared is inapplicable.

This piece of gambling news is worrying for some of the many online casinos operating in the country, but with the Finance Ministry immediately stating the catastrophic consequences such a ban would have, there is a good chance it will never see the light of day.

Among the reasons stated by the Ministry of Finance were the 9 year licenses awarded to over 200 operators: licenses that would have to be shut down during the 12 months. Those operators would surely seek recompense from the government for those 12 months.

The other big consideration is the massive loss in tax revenue the government would see from any ban. With online casinos in Italy numbering in their hundreds, the tax take from the gambling market reached a huge EUR 7.5 billion. Take this away and a struggling government would have even more problems to worry about.

The likelihood of this ban coming into play is low therefore, but gaming sites and casinos should still be on the look out for any sudden changes in direction from the government. There is also consideration to be given to the wording of the motion, with gambling referred to, but ‘public games’ not.