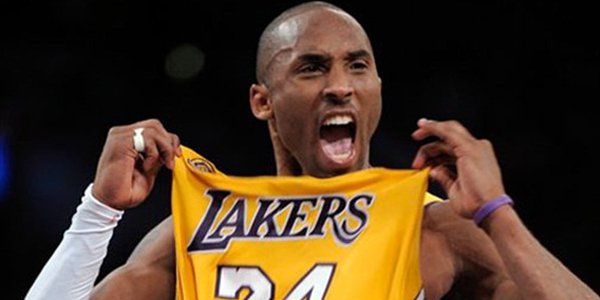 Kobe is one of the highest paid players in the NBA.

Kobe Bryant is worth USD 360 million and most consider it worth every penny. Kobe was born into basketball royalty as the son of a former NBA player Joe “Jellybean” Bryant who played for the Philadelphia 76ers. Kobe was another one of those few players with the basketball skill to move straight from high school to the NBA. His instant charisma made him attract a lot of attention and made instant U.S gambling news.

Many early on, were making Michael Jordan comparisons. With Shaquille O’Neal, Kobe won three championships with the Los Angeles Lakers. Because of a dispute with O’Neal, the Lakers moved Shaq to the Miami Heat as Kobe became the centerpiece of the Laker’s Franchise. Kobe quickly became the premier player of the NBA ranking third and sixth in NBA all-time post season scoring and winning two more NBA titles.

Kobe Bryant was born in Philadelphia, Pennsylvania. This father, Joe “Jellybean” Bryant, was an NBA player for the Philadelphia 76ers. After he left the NBA, Jellybean left the U.S. to play in Italy and took the family when Kobe was six. Growing up in Italy, Kobe learned fluency in Italian and Spanish. Kobe would practice regularly in basketball summer leagues in the U.S.

Playing from the age of three, Kobe loved basketball and his favorite team was the Lakers. Often Kobe’s grandfather would send him videos of Lakers games that Kobe would study. After Jellybean retired from basketball in 1991, Kobe returned to the U.S., enrolling at Lower Merion High School eventually having a 77-13 season with an average of 31 points, 10.4 rebounds and 5.2 assists.

Although power house collegiate programs like Duke, North Carolina and Michigan were on his list of preferences, Kobe was influenced by Kevin Garnett and his decision to be in the first round of the 1995 NBA draft out of high school. Kobe, still in high school was training and playing alongside the Philadelphia 76ers. He would eventually graduate from high school beating Wilt Chamberlain’s scoring record with 2,883 points.

Although he achieved every accolade attainable in high school, Kobe decided to enter the NBA draft become the sixth player to enter from high school. The Charlotte Hornets picked up Bryant, but because of a prior agreement traded him to the LA Lakers for aging center Vlade Divac. As the youngest player at the time ever to play in an NBA game, Kobe was one the bench replacing guards Eddie Jones and Nick Van Exel.

Kobe struggles to find his niche in as a rookie phenom

Although he didn’t earn Rookie of the Year status, Kobe was voted unto the NBA All Rookie second team and was the youngest to win the 1997 Slam Dunk Contest at 18 years old. From 1997 to 1998, Kobe was earning a little over USD 1 million a month and not the safest pick along U.S. gambling laws. Kobe’s skill and obvious likeability contributed to him signing a six-year endorsement contract with the sports apparel company Adidas for USD 40 million.

Kobe’s career soon progressed as he was able to secure NBA’s Sixth Man of the Year Award at the end of the 1998-1999 season as well as becoming the youngest NBA All-Star to start. The next season however proved pivotal in Kobe’s career as he signed a six-year contract worth USD 70 million. Although his Lakers team were unsuccessful in the playoffs, this was the first time sportswriter’s began to compare Kobe to Michael Jordan and Magic Johnson.

With the emergence of six-time NBA Champion Chicago Bulls coach Phil Jackson onto the Lakers Team, Kobe would begin to make history. The combination of Kobe and Shaq proved dominant as they led the Lakers to 67 wins and won their first NBA Championship. The next season, Bryant and Shaq were able to claim a second Championship. The 2001-2002 season saw obvious cracks in the Kobe and Shaq’s relationship, but they still managed to win a third title.

During that time, Kobe set a record for scoring 40 or more points in nine consecutive games. Amidst allegations of sexual assault, Kobe was unable to contribute to the Lakers and they failed to win a championship. The next year, Shaq went to Miami, Jackson left as coach and the Lakers ended without a finals appearance. Upon the following season, Jackson returned and the Lakers were able to secure two more championships in 2009 and 2010.

Kobe’s endurance as plays past his prime

Kobe Bryant has broken many records throughout his career. For peak value, Kobe has made punters, using online sportsbooks in the U.S., as much money as any player in history. In 2010, Nike premiered their “Zoom Kobe IV” which was billed as the “lightest basketball shoe ever.” Although a possible divorced settlement from his wife Vanessa could cost USD 150 million, Kobe’s continued earnings may well make up for the loss.