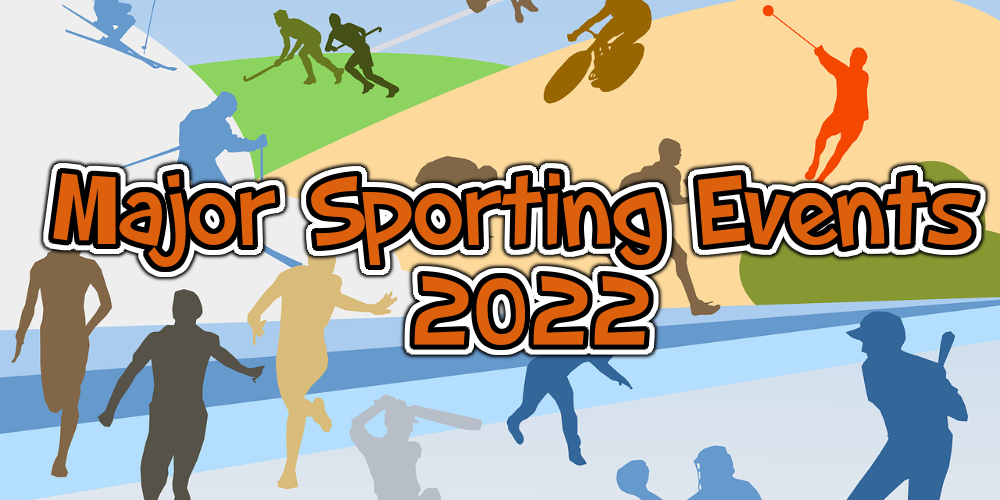 We are already in the new year so it’s time to check the biggest sporting events in 2022. From the Winter Olympics to the Football World Cup, there are plenty of things to look forward to. Like the new season of Formula 1,  tennis Grand Slams and the big cycling events along with the World Swimming and Athletic Championships. Let’s see all the major sporting events in 2022.

2021 was a pretty busy year for sports fans and athletes all around the world thanks to the 2020 UEFA European Championships and the 2020 Tokyo Olympics. But this year promises to be almost as packed with action as the previous season. Starting with the 2022 Winter Olympics in Beijing in February. Followed by crucial games in the World Cup qualifiers and the 2021/22 Champions League season. Of course, all regular major competitions and championships will return as well from Formula 1 to the Giro d’Italia While women footballers will compete in the European Championship this summer in the UK.  Wimbledon, Athletics World Championship, and Rugby World Cup wait for us ahead of the most awaited event of the year, the 2022 FIFA World Cup in Qatar. But let’s see first the biggest events in the first half of the new year.

The first world champion of the year will be crowned on the 3rd of January when the 2022 PDC Darts World Championship comes to an end. Peter Wright can win his second title against the brilliant Michael Smith. The English player reached the final for the first time in his career. Alexandra Palace in London will host another big event, the 2022 Snooker Masters in the following week where Chinese Yan Bingtao is the defending champion. Online sportsbooks in the UK still favoring the world No2, Judd Trump to win this time. The best European men’s handball teams will meet in Slovakia and Hungary between the 13th and 30th of January. While the first Grand Slam of the year, the 2022 Australian Open will begin on the 17th of January.

The 2021 Africa Cup of Nations has been postponed to this year. It takes place this year, between 9 January – 6 February in Cameroon. With players like Mo Salah, Sadio Mane, and Ajax striker Sebastien Haller, we should see great games and lots of goals. Football fans can expect top-level football in the rest of the month too. With the knockout stage matches in the Champions League, Europa League, and Europa Conference League. But the biggest event of the month and one of the major sporting events in 2022 will be the 2022 Winter Olympics. The Games are held in Beijing between 4-20 February with the best winter sports athletes taking part in it. You can read more about them in our previous articles.

The new Formula1 season will start where it did last season, in Bahrein on the 20th of March. Where Lewis Hamilton can fight back and start his new mission for his record 8th world title. The 2022 MotoGP season opener also takes place in the area with Qatar hosting the first race on the 6th of March. The Ice Hockey World Championship is scheduled for April, just like the golf Masters Tournament in Georgia.

In May tennis fans can follow the best clay specialists in the 2022 French Open. While cycling enthusiasts can cheer their favorites in Hungary and Italy during the 2022 Giro d’Italia. And see if Egan Bernal can defend his title in the three-week race, ending on the 29th of May in Verona.

The final of the Champions League is held the day before, on the 28th of May in Saint Petersburg. Seville will host the Europa League final 10 days earlier. By that time we should also know the champions in most major European football leagues. With online gambling sites in the UK favoring Manchester City to win the Premier League title again. We have one more big event in May. The 2022 Swimming World Championship between 13 – 29 May, held in Fukuoka, Japan. Games in the 2022/23 Nations League will begin on the 2nd of June with games as Spain vs Portugal and Italy vs Germany. Three more rounds will take place this month for the joy of all football fans. In golf, the men’s US Open and the Women’s PGA Championship are also held in June. While the 2022 Wimbledon Championship will begin on the 27th of June this year.