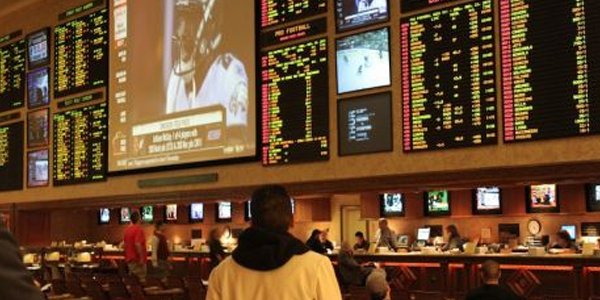 New Jersey is still forbidden from offering sports betting at racetracks and in Atlantic City, while Delaware keeps on enjoying the benefits.

Yes, the Monmouth Park in New Jersey is still prevented by the federal judge from offering sports betting under American gambling laws. However, gamers in the state still have plenty of alternatives to wager on the NFL and other sports, the closest one located just some 100 miles from the racetrack, but in another state.

Delaware allows its residents and anyone who visits to bet on sports in the United States from any of its three racetrack casinos, alongside over 80 other businesses from restaurants to liquor and tobacco shops. A couple of such examples are the Reef steak and seafood restaurant and Naamans Beer, Wine & Spirits shop in Claymont.

Both above-mentioned locations are just miles away from New Jersey, and according to local employees, every Sunday there’s a steadily growing crowd of bettors looking to make their game-day bets. The owner of the Reef, Charley Ross, says NFL betting is pretty “huge” in terms of generating revenue for his restaurant, it’s still growing considering he just added gambling to the attractions of the place last year.

Delaware is enjoying increasing revenues from sports betting, while New Jersey lags behind

• Sports betting in New Jersey has been challenged by sport leagues

• A major ruling is expected to come after November 20th

Ross shared with American gambling news: “It’s not unusual for us to have $500 or $1,000 bets. I had a guy win $168,000 on one bet last year. We have a number of clients from New Jersey who are big bettors, and even more from Pennsylvania. Sunday mornings, it’s crazy — they’re lined up out the door all the way until the 1 PM kickoff.” The owner gets 5 percent of all the money gambled at his shop in line with the regulations.

Looking at the experience in Delaware, it’s hard to understand what New Jersey lawmakers are waiting for. The state has around 10 percent of New Jersey population, and total amount wagered in the state last year alone was $31.5 million, which is more than triple the goal set back in 2009. This allowed the state coffers to get $5.2 million, not to mention the casinos and horsemen also getting their share.

New Jersey is currently in limbo, after the state law has been challenged in court by NFL and other leagues. According to the most timid expectations sports betting in the state can net over $10 billion on an annual basis.

Yes, New Jersey is a much bigger state than Delaware, but they also plan to allow betting on other sports besides the NFL. Delaware gamers are now limited to “parlay” betting where at least three games need to be wagered on, while New Jersey plans to offer a much wider palette of betting including single-game ones.

Despite obvious limitations on sports betting in Delaware, the activity is in high demand throughout the state. There are competing business offering betting opportunities, and one of the cornerstones of beating the neighbor is opening hours, some places choose to start taking bets an hour or so before the other ones.

There are also promotions in play, the Reef, for example offers “Bet Pro Football Here & Get a Free Dinner!!!”, which is valid for anyone who wagers over $100 in one sitting. Naturally, neon signs advertising betting opportunities are there in great numbers too.

As for the winnings, Delaware parlay system allows punters to get a 6.5 for 1 payout for a 3-game bet, where $11 can be won on a minimum bet of $2. Naturally if the selection contains more than three games, payouts grow up to 2,500 for 1 in case punters correctly guess the winner in all 12 chosen games against the point spread. However, getting a single game wrong, or even landing exactly on the point spread – the betting ticket will lose.

Currently, Delaware is one of only four states in the USA allowing some sort of sports betting apart from horse racing, dog racing or jai alai. While betting is prohibited everywhere else, sports betting has been “grandfathered” into a new law thanks to the fact that Nevada, Delaware, Oregon, and Montana has been experimenting with wagering before. In case of Delaware it was NFL parlay betting back in 1976.

Naturally, Delaware has tried to offer single-game NFL betting, going to the federal court in 2009, but the bid was rejected then. The state had to settle for the parlay betting revival, made possible through Delaware Lottery at all of the three racetrack casinos. Retail stores and restaurants were allowed to offer betting in 2012, with one exception – big winners have to cash their tickets at the racetrack establishments.

Vernon Kirk, the director of the Delaware Lottery, commented: “The retailers have been very enthusiastic about having another popular ticket to sell. And the casinos like the fact that if you win more than $600, you have to go to one of their sports books to cash it. That customer might have a beer, eat lunch or go to the blackjack table while they’re there.”

What about New Jersey?

New Jersey has been fighting the battle to allow sports betting at its racetrack and in Atlantic City casinos for many years. The state is planning to offer single-game NFL betting, just like Nevada, and also wants to allow punters to enjoy wagering on all sports from tennis to ice-hockey, and from baseball to NASCAR.

Following the federal ban, Monmouth Park has been the only racetrack to challenge the decision in court. Michael Shipp, U.S. District Court Judge, has ruled against the state’s sports betting effort in February 2013. The judge is expected to rule on whether to issue a permanent injunction for Monmouth Park right after the November 20 hearing scheduled to take place in Trenton.

Online casino gambling suggestion in New Jersey, along with sports betting, has passed Legislature and has already been approved by Governor Christie. It’s widely being regarded as a measure to help struggling Atlantic City casinos, which lost four of their 12 establishments this year, and are looking to lose the fifth – Trump Taj Mahal.

Even the horseracing industry executives are saying that allowing sports betting in the state will save the sport, considering larger revenues will bring more investment and subsequently bigger crowds to their racetracks. Only time will tell if and when New Jersey will succeed in offering legal sports betting.