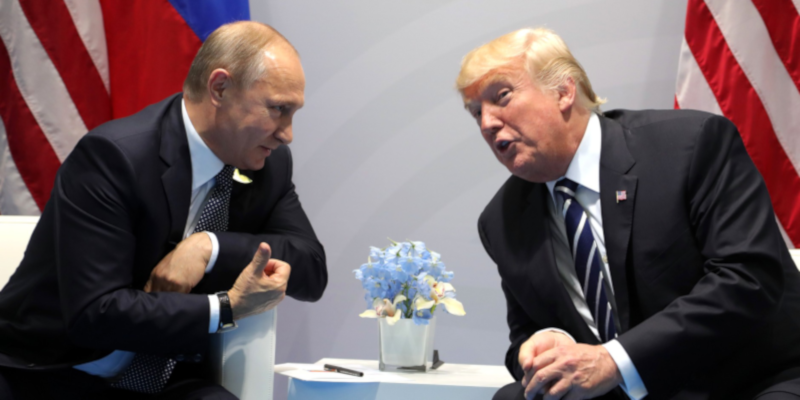 Will Putin and Trump win a joint Nobel peace prize? This is not a joke, it’s an actual betting on 1xbet.com. Anekdoty is a style of political jokes blooming usually in repressive countries, now they live their renaissance in Russia. New soviet jokes about Putin and Trump are a serious measurement in sociology.

According to online gambling sites in the US, the odds of the Netherlands winning the Europian Waterpolo Championship is 1000 (meaning if you put 1USD on them and they win, you will receive 1000USD). However, the odds of Trump and Puting winning a joint Nobel peace prize by the end of 2019 is 19. (you put 1USD and receive 19USD)

Anekdoty in soviet times – a collection by CIA agents

Back in the times, CIA agents in Russia were collecting Anekdoty. Not for their fun, but they were thinking that this is the best way to measure public mood. Now for all of our happiness, this document is declassified and you can reach it here.

Anekdoty is a form of dark political jokes that are usually circulating by word of mouth. While it’s funny in a way it’s also a bit sad, that people have to use this method to let the steam out on their political frustrations. Anekdoty is the most powerful in soft dictatorships. As in liberal countries, you have ways to act and reflect on political issues, this form of jokes is not really popular. Neither they go viral under hardcore repression where you can pay with your life for them. While new soviet jokes about Putin are thriving at the moment, they have a long history. Here’s a representation of the works of mechanics of an anekdoty:

A worker standing in a liquor line says: “I have had enough, keep my place I am going and shoot Gorbachev.” Two hours later he returns to claim his place in the line. His friends ask, “Did you get him?” No, the line there was even longer than here.”

Nowadays, the American president is a popular subject of new soviet jokes about Putin for his strange relationship with him. As one of the jokes says: “Trump fired all his intelligence chiefs. Now he’s going to get the information from his source: Putin.” While online sportsbooks news sites in the US don’t provide us with many betting predictions on the questin if Putin and Trump will receive a joint Nobel peace prize by the end of this year, we won’t let you down at Gamingzion. After running our high-end AI-algorithms which we were feeding all the significant news about Putin and Trump, Furthermore, consulting with many political scientists about their opinion, Furthermore, analyzing all previous Nobel peace prizes, including nominations and all possible outcomes, here is our prediction: very poor chances.

The evolution of new soviet jokes about Putin

Next to the first election of Putin, anekdotys were not instantly coming after him. However, as he gained power and showed his true colors he became an object of fear and with that, a popular subject of this genre. As one of the new soviet jokes about Putin says: As Putin opens the fridge he sees a plate of quivering gelatin. He says: “Stop shaking. I am only getting the milk.”

Anekdoty as a way to take revenge

While there are many anekdoty that works as a tool to let of steam over people’s despair and poverty, there are ones that are giving the ability to take some kind of revenge on the oppressing regime. Just compare these two following jokes.

On a sunny morning, Brezhnev goes out on the balcony of his apartment, looks to the east, and says, “Hello, sun!” The sun replies, “Good morning, dear Leonid Ilyich, the beloved leader of our glorious socialist motherland, the hope of all progressive humanity, and the guardian of peace on Earth!” In the evening, Brezhnev admires the beautiful sunset and fishes for a compliment: “Hello again, sun!” The sun answers, “Go f*ck yourself—I am in the West now.”

Coming to Brezhnev maybe we should mention a Sonett from a Hungarian poet, György Petri.

In the memory of Leonid Ilyich Brezhnev.

The old boomer with the perverse lips Is done for,
the Russian-Hungarian monarchy tends to close to an end.
Jaru and Csau* the two misshapen-faced sextons
Eastern-Europe’s  trustees in bankruptcy,

are weighing if there’s gonna be some cumshaws.
They are snuffing and f*cking around the wreath.
Cocking their ears: They might chiming the bells for salvation.

Anyway, he is dead.
He is not pulling out great October
from his pee-stained pants anymore.**