The Philippines Court of Appeals has dropped a case to do with a dodgy online casino, saying that they are not punishable by law 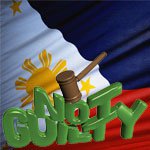 The Court of Appeal in the Philippines have dismissed a case brought against an online casino, operating in Angeles, Pampanga, according to the latest Philippines gambling news.

The Department of Justice had brought the resolution forward under Presidential Decree No. 1602, stating that internet gambling or Philippine internet casinos are illegal and punishable under law. Mrs. Tolentino however, found no such law existed. In Section 1 of Presidential Decree 1602, she could find no mention of any such law dictated by the Department of Justice.

The Court of Appeal later announced the following to the dejected Department of Justice: “There is no law that punishes internet gambling or online casino. Well settled is the principle that ‘there is no crime when there is no law penalizing it.”

The 1978 Presidential Decree has been amended several times in it’s thirty years of history, but the Court of Appeal failed to see any connection or amendment that specifically mentioned illegal gambling, and online casinos being illegal. Much to the dismay of the Department of Justice.

The Court of Appeal continued by saying: “In order to constitute a crime, the act or acts complained must be within the letter and spirit of the penal law. Hence, the act of the respondent Secretary of justice in ordering the filing of information against the petitioner for violation of PD 1602, has in effect exceeded his authority and had impliedly amended PD 1602. This act of the respondent Secretary of Justice is a clear and grave abuse of discretion amounting to lack or excess of jurisdiction.”

The Court of Appeal also stated that former Justice Secretary Raul Gonzales should be dismissed for the claim against Edgar Lim and his Taiwanese associates by the National Bureau of Investigation and Philippine Amusement and Gaming Corporation, which was filed over five years ago, in 2006.