Premier League Relegation Candidates at Online Sportsbooks in the UK 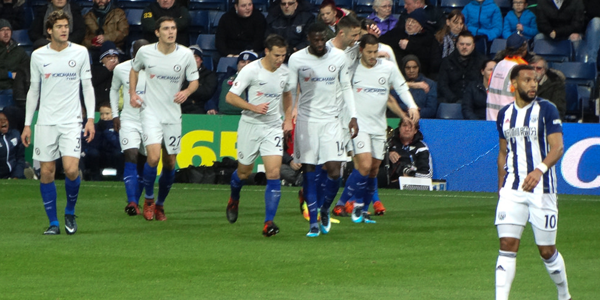 With 10 games left, everybody from ninth-placed Everton and below has cause for concern, making 2017/18 season the tightest Premier League relegation battle ever. Which teams should you select from the relegation odds section at online sportsbooks in the UK?

According to online sportsbooks in the UK one definite team to go down is West Bromwich, as they sit on the very bottom and still receive bad news about their first team players. Whereas the other two condemned to the drop may well be undetermined until the final day. However there are several teams facing more threat than others, but maybe you need to wait for a couple of weeks before picking the other two relegation candidates.

It is important to keep in mind that since the beginning of 2017/18 season every week one team at the bottom begin to suggest they might make a run and break away from the rest, but they fall at the very next hurdle. So in order to make a strong case for a candidate to skip relegation or slip down, the upcoming weeks should be taken into account.

The rock-bottom West Brom with just 20 points, look to be a write-off even though their fixture list seems relatively favorable. Their situation is deteriorating rather than improving, and the injury of Daniel Sturridge is an unfortunate, if foreseeable, blow. He will be out for at least one month. The on-loan Liverpool striker came to blast the team out of the Premier League drop zone, but the dreadful blow will probably be decisive in West Brom relegation.

West Brom are considered one of the season’s mysteries given the apparent quality of their squad but, as they continue to unravel, it is hard to spy recovery. At Unibet Sportsbook West Bromwich sit on top of the relegation odds with (1.14) to be the first team to drop off the Premier League.

Relegation candidates at online sportsbooks in the UK

Besides West Brom, there are three teams sitting on top of relegation odds at Unibet Sportsbook, including Stoke City with (1.83) odds, Swansea (2.30) odds, and Crystal Palace with (3.40) odds. Which one of them is a strong relegation candidate so far?

Although Swansea are still in the relegation zone, they have been gaining points since early of January, especially with two victories over Arsenal and Liverpool, giving a strong sign that they might skip relegation any time soon. Whereas both Crystal Palace and Stoke City remain stuck between draws and defeats for a while now, and unfortunately they share a bad luck of harsh fixtures in the upcoming weeks, so maybe selecting one or both of the teams could be a wise thing to do.

According to online sportsbooks in the UK several other teams are waiting their turn to meet with some of Premier’s top 04 including Brighton, newly promoted Huddersfield, and Bournemouth. Although they are few points above relegation zone, they might slip down if they encounter defeats by the elite clubs. Will you pick one of these teams? As they remain in risk, you might do so. At Unibet Sportsbook, Huddersfield with (3.00) odds are fourth placed in relegation odds section, Brighton 7th placed with odds at (6.00), and Bournemouth are the least likely to face relegation with (26.00) odds.