The Deflategate Scandal for Dummies 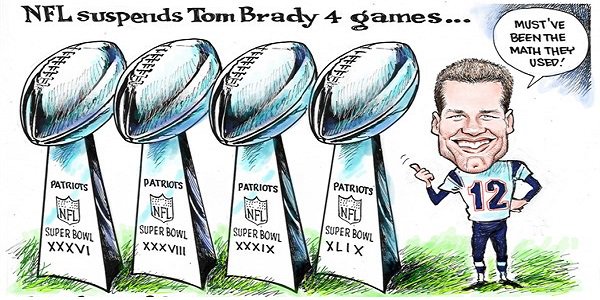 Deflategate scandal is mired in a mix of controversy and indifference.

New England Patriots quarterback Tom Brady met with NFL commissioner Roger Goodell and they once again couldn’t reach a compromise. As a result, U.S. District Court Judge Richard M. Berman announced that he will make a decision on Friday at the latest. Brady is trying to overturn the ruling of his involvement in the Deflategate scandal to lift his four-game suspension which starts at the beginning of the season. Mind you, since no foul play was actually proven, Brady got this penalty for obstructing the investigation by getting rid of his old phone.

The Deflategate scandal, which rocked US gambling news, came about after the New England Patriots devastated the Indianapolis Colts 45-7. The AFC Championship, the second most important game before the Super Bowl, shouldn’t have been a lopsided display since both teams had comparable records. The New England victory was credited on the account that the team used footballs that were inflated to less than the minimal specifications.

The AFC final was too good to be true

Brady played irresistibly, but apparently more than luck and skill were aiding him

Prior to the Deflategate scandal, the New England Patriots had a record of 12-4 during the regular season while the Indianapolis Colts had a record of 11-5. Under any guaranteed sports betting system, it should’ve been hard to predict this game. The rules set by the NFL state that all footballs used in league games must have an air gauge pressure between 12.5 and 13.5 pounds per square inch. The measurements will not be officially recognized until the referees measure the balls prior to the game.

The official practice was for the home teams to provide all the footballs used in the game. After 2006, the rules changed and each team was allowed to provide their own footballs, when playing on offense. Although the quarterbacks of both teams involved saw this ruling as created in order for quarterbacks to play with balls that suited them, New England is accused of taken this a step further.

An interception that proved very costly for Brady

Footballs which have less air in them are easier to grip, throw, catch and control which can give a team a superior advantage, especially in adverse conditions such as rain. A football that is brought from a warm place to a cold place can deflate. Although this is the major defense for New England’s use of balls in their winter championship game, Indianapolis and the Baltimore Raven’s had previous complaints against the Patriots for using deflated balls to their advantage.

Always a bummer to throw an INT in a title game, but this one..

Known to those mobile betting, Tom Brady threw an interception to D’Qwell Jackson of the Colts during the first half of the game. When the Jackson gave the ball to the Colts equipment manager as a souvenir, he noticed that the ball felt deflated. The ball was measured and reported as “deflated” as well as nine other balls used by Pats before halftime. Although the balls used by the Colts were re-inflated to suitable specs, some reports claim that New England used a different set of backup footballs for the next half.

No official records of foul play

Prior to the official investigation into the Deflategate scandal, Indianapolis Colts General Manager Ryan Grigson said that he notified the league of allegations that the Patriots were using under inflated balls. This was first notice during week 11 when a Colts safety intercepted two passes by Brady and noticed the ball seemed “spongy or soft when squeezed.”

The Patriots coach Bill Belichick said that the team would cooperate fully and Tom Brady dismissed the charges as ridiculous, than claimed we would deal with it. A video taken in the Patriots locker room revealed an attendant who took 12 footballs from each team into a restroom for 90 seconds. The fact that officials never recorded any of the air pressure numbers is an oversight that might work to New England’s advantage.

The investigation concluded with a 243-page document called the Wells Report. The report stated that “more probable than not” New England’s equipment personnel were intentionally bypassing the rules. In addition, Brady was reported as “more probable than not” being fully aware of these actions and that the balls were deflated after they were approved by game officials.

Physics professor Dr. Daniel Marlow concluded that no environmental factors could alter the ball pressures to the degree that they were prior to the second half of that game. In response, New England’s attorney had evidence supported by Nobel Prize winning scientist Roderick MacKinnon that the Wells Report overlooked the Ideal gas law which does account for the deflation of the balls without the assistance of New England personnel.

To the pillory with Tom Brady!

The NFL suspended Tom Brady without pay for the first four games of the 2015-2016 season. In addition, the Patriots received a USD 1 million fine and had to relinquish their first round draft pick for 2016 and their fourth round pick for 2017. Although many feel the punishment was harsh, critics believed the penalties were the direct result of the Patriots past actions and the deliberant actions of Brady to fully comply with the investigation. Now those who bet on sports in the US can wager on this week’s verdict.

Considering what some of these guys got, this penalty is preposterously harsh