Was Global Gambling A Gift From The Gods?

News >Was Global Gambling A Gift From The Gods? 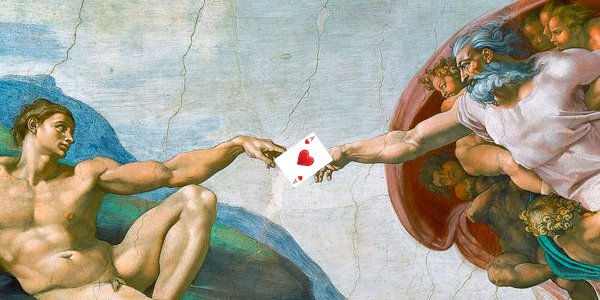 From talking with the deities to one of the most popular entertainments on the planet gambling has come a long way.

Gambling has been around for as long as we have. The experts tell us this probably stemmed out of the religious habit of letting chance demonstrate the will of the gods. Apparently if you’re willing to let some yarrow stalks thrown at the ground indicate what the divinities desire it’s but a small step away to wagering on the gods’ decision.

Perhaps they’re right, but I can’t help thinking before games of chance such as that, there would have been wagers. Proto-man huddled in his cave could all too easily have indicated that he was willing to bet a sizable number of dead mammoths that no one else in the tribe will recognize his friends painting of an antelope, unless they’re told what it is first, because it looks like a ferret.

These hunter-gatherer societies would have provided ample scope for gambling and for gambling to be seen as part and parcel of daily life. Hard to deny life’s a gamble when one of you has just had their leg bitten off by a saber-toothed tiger

With civilization gambling became more prevalent, perhaps because there was more to win, and certainly if you look at the number of rules various ruling groups had against it, you can only assume it was very, very popular indeed. They so rarely try to ban things no one does. Well. Except voter fraud.

• God spoke through games of chance and drawing lots

Of course some societies took it very much in their stride. The Greeks loved to gamble as Homer made clear and they even had casinos of sorts although with perhaps a slight tarnish of bad reputation to them that kept most away. Of course these days there are online casinos in Greece which don’t suffer from that problem.

Akin to their prehistoric ancestors the Romans used chance to give voice to the gods, and then gambled on just about everything pretty much constantly, a hobby not limited to the wealthy or free, as even slaves wagered on games of chance and indeed the famous games in the arena themselves.

The casting of lots is even referred to in the bible, albeit in reference to seeing which of the guards at the crucifixion got Jesus’ clothes after they nailed him up. Wonder why THAT empire collapsed, eh?

The Chinese have had specialist games of chance since 2,300BC involving tiles, which was either a bathroom redecoration race or something like Keno which was a sanctioned lotto type game played in purpose built locations and taxed by the authorities, such as they were.

Playing cards came out of China a thousand years ago and were brought to Europe by those happy funsters the Mamalukes (followers of Islam) just in time for Europeans to redecorate them with kings and queens. Gaming with authority figures probably amused.

Dice have been with us far longer, perhaps 40,000 years, in various forms and have been used for a great many varying games. Much of the time they were seen as that connection between the world and the will of the gods, gaming with them no negative connotation since the results were a deity’s wish.

Of course the authorities of many cultures tried to crack down on this, but others not only embraced it but used it to settle disputes and conflicts. As late as 1803 Swedish courts used dice to settle criminal matters. A practice I suspect done away with by lawyers who’d discovered the phrase “billable hours”.

The attitude of the powers that be to gambling have changed over time, and indeed changed to suit circumstances. You might think that it is only recently that governments have chosen the revenue from taxing gambling over the outrage of the moral minority, but these were principles first used in the 15th century as countries sought to increase their coffers.

They began with lotteries, a form of gambling that is still used today by nations to gain extra revenue. Sports betting, after its trial run in Greece and Rome only became widely acceptable in Europe a few hundred years ago.

Europeans spread sports betting nearly everywhere they went throughout colonies and dominions with the English export of cricket being a popular choice in some quarters before hefty and quite harsh regulation was imposed.

It would seem that as times change so do attitudes and the liberalization we see today rippling around the world, changing US attitudes over there and Greek gambling laws over here, is perhaps not the dawn of a new gambling era but a swing back to one we enjoyed before.