Gambling – The Surprising Constant Of An Uncertain World 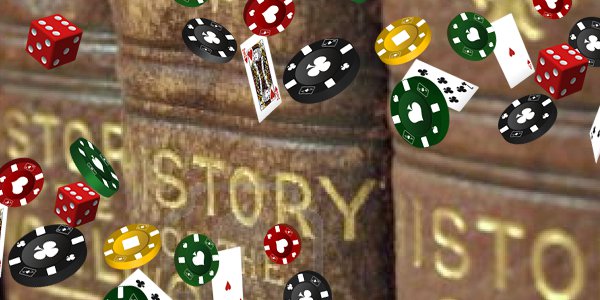 We look at where gambling has been, what it\’s doing now and where it\’s going in the future. From changing markets to adjusting laws, from big business to occasional wagers, gambling is a world of issues and investments that effect how and what we play.

With us since the dawn of time we look at the divine origins of gambling, where it came from and how it spread across the world. We look at how nations today are interacting with the gambling community and how each is benefiting from the other.

With the rise of online gambling challenging the traditional hubs for global gambling dominance we look at the shifting markets and examine the factors behind the continued issue of illegal gambling.
We also look to the future of gambling and those that are looking to shape it.

Was Global Gambling A Gift From The Gods? – short overview of gambling history

The human species rose up about 200,000 years ago and, given SETI\’s inability to find any other intelligent life in the universe, apparently the odds against it were quite incredible.

To put those odds in perspective, were Robinson Crusoe to have been rescued by female nudist nymphomaniac coke smugglers who are really into beach volleyball he wouldn\’t have been even half as lucky as we have been as a species just to be here.

Perhaps it\’s because we were such an evolutionary long shot that we\’re predisposed to gamble, or it could be because we as a species HAVE to gamble.

It\’s probably a design flaw but at present none of us can see the future, they\’ll probably release a patch to fix that sometime, until they do we\’re stuck in an existence where we\’re all forced to gamble on the outcome of our words and deeds.

Certainly cause and effect can assist in rendering some of these almost trivial.

Whatever the origins of gambling there is no denying that these days it is a massive industry that entertains millions the world over every day. From the online poker sites in the USA to the Blackjack tournament participants in Vegas, from the bookmaker\’s window to the tables of a casino, we gamble and we like it.

This speaks to that inherent inability to see the future and our ability to use that lack of certainty to both entertain ourselves and possibly reward our audacity of risk. The SAS might declare “Who Dares Wins” but they get machine guns, the rest of us have to rely on our intuition and experience.

Not that we always use these to analyze the form of the next race at Happy Valley in Hong Kong or the possibility of the croupier having a face card. Whilst we participate in the pillars of traditional gambling we by no means limit ourselves to these well-known examples.

From the existence of Yeti to the chances of alien contact, from personal challenges to pan-global political and socio-economic circumstance we\’ll wager on it. Sometimes these are ridiculous, sometimes entirely mundane, but they too reflect our insatiable desire to gamble.

With a history of some two thousand centuries behind us you might be inclined to believe that by now we\’d have developed a universally accepted attitude to gambling. Nothing could be further from the truth as governments and authorities around the world continue to have varied approaches and sentiments.

From bizarrely strict prohibition to an almost wanton free-for-all it would seem there is no limit to the variety of laws and regulations. The edicts of long obsolete customs or practices, many now completely out of step with public opinion, still hamper a great number of people enjoying a little flutter.

The shifting sands of political whim and expediency have led to some ridiculously contradictory situations where artificially imposed boundaries divide the cans from the cannots. Sometimes these are cultural left overs that take a great many years to change, but others change with a pragmatism that would have frightened Machiavelli.

Economics drives these changes as much as social attitudes and the winds of political fortunes. Governments facing a fiscal shortfall have often turned to gambling as a source of revenue that but a short time before they were actively attempting to eradicate. (Yes Portugal, I do mean you).

If the laws vary around the world (and they do) and change over time (seemingly constantly) it isn\’t surprising that gambling as an industry also tends not to remain static. In response to a shift in a population\’s attitude or a government\’s change of heart gambling is ready to react appropriately.

As new markets open up investment and construction bolster local economies and provide employment and facilities to local populations not previous available. The benefits of a properly regulated legal gambling system are undeniable, just ask Macau, or Vegas, or Monte Carlo.

Of course there is massively fierce competition between these various hubs of gambling spread across the world. Huge investments in massive resorts and the refurbishment of older more traditional establishment means that today many big corporations are gambling on gambling\’s future.

This means the punter of today faces a choice of locations all vying for their business, all trying to attract the greatest number of visitors. Traditional hubs in Europe and America are even now facing a seemingly unstoppable challenge from Asia.

One of the issues that every nation has to face is the problem of illegal gambling. Sometimes the creation of their own laws, sometimes the product of culture or history, this darker side to gambling has an effect on the entire gambling world.

• From the caves of prehistoric earth to the online poker sites in Russia
• A look at the past, present and future of the wager

• Legal, illegal, on and offline, we take a global safari of gambling

From the vicious dog or cock fighting of rural areas to the backstreet bookies of many cities the ongoing attempt to wipe out illegal gambling has thus far failed. Governments still spend big for very little reward in their efforts to combat this multi-billion dollar criminal enterprise.

Some argue that more draconian legislation like US gambling laws will work, cracking down on syndicates and their customers with law enforcement and prosecution. Others disagree and maintain that only sensible and proper legalization and regulation of gambling will defeat it.

The pros and cons are argued all but constantly in parliaments and congresses the world over. Politicians may continue to debate the issue but whilst they fail to find consensus the illegal gambling trade continues to harm honest gamblers every day.

The future of gambling is virtually here already

If legality and economics drives the tidal shifts in global gambling today they\’re very likely to continue to do so well into the future. Whether that changes the locations we choose, the games we play or the manner in which we play them, remains to be seen.

Big business sees the opportunities and pitfalls with both proponents of gambling and their detractors wagering on its future in their countries. Lobbyists and advocacy groups spring up financed by those with vested interests and the political system is bombarded with adversarial propaganda.

With billions of dollars at stake there is immensely intense competition between not just locations and companies but the different types of gambling. The rise of internet betting
internet betting has provided access to millions of punters in dozens of countries, but its competitors in the physical gambling world aren\’t happy about it.

Whatever the future holds for gambling, and whoever happens to wager upon it, the only real certainty is that gambling will still be here regardless. It\’s been around for 200,000 years, it\’s likely to be around for 200,000 more. You can bet on it.