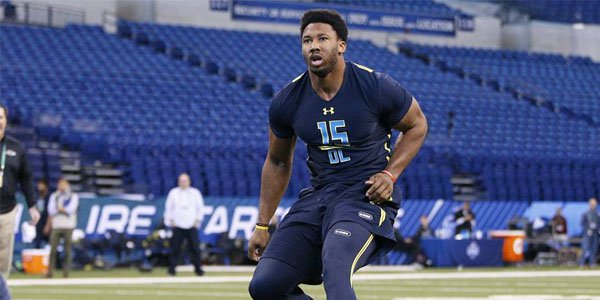 In this article we’ll take a look at some of the most exciting NFL prospects you can bet on making a huge impression this season.

On September 7th 2017, the new NFL season will officially begin. Fans around the world are busy predicting which teams will make it into the Super Bowl, and some great betting odds are available at sites like Intertops.

A large number of top prospects are now officially part of the NFL this season, but how many will actually go on to do big things? Here we’ll take a look at some of the top NFL prospects you can bet on will make a serious impact this year.

Before the 2017 NFL draft, Myles Garrett was expected to be a top pick by most online sportsbooks in the US. This prediction turned out to be correct, as he was the first player chosen in the draft. Garrett is now a part of the Cleveland Browns, an addition that fans in Ohio hope will turn their team’s luck around.

At 6 feet 4 inches, Garrett is an extremely athletic player for his size. He was one of the best players on Texas A&M despite a score of injuries. He was a two-time first team All American player, recording 141 tackles throughout his college career.

At the moment, Intertops lists the Brown’s odds to win the Super Bowl at 151.00, the lowest of any team in the league. Myles Garrett is without a doubt one of the top NFL prospects you can bet on this year, but he’ll need to do big things in order to help his team reach the playoffs.

New wide receivers are oftentimes shocked at their inability to make catches under the pressure and contact of the best cornerbacks in the world. Mike Williams shouldn’t have that problem. He proved time and time again that he’s one of the best wide receivers in the NCAA, and as a result was drafted by the Los Angeles Chargers.

Mike Williams is considered one of the most exciting wide receivers hading into the 2017 season (photo: latimes.com)

If you’re looking for NFL prospects you can bet on making an impact, and quite possibly US gambling news this season, Mike Williams is your man. He was a key reason why Clemson was able to defeat Alabama in the National Championship.

At the moment, the Chargers are a considerable underdog to win the Super Bowl this year. They haven’t won a Super Bowl in their history, but with Williams may have the type of young talent needed to push far into the playoffs. Their odds to win the championship this year are set at 67.00.

Some NFL betting experts were skeptical to jump on the Njoku hype-train heading into the NFL draft. He competed just 21 receptions in 2015 and 43 in 2016, but he’s proven himself to be perhaps the most athletic young players in the NFL.

David Njoku has the type of raw talent needed to become an NFL prospect you can bet on going far. He drops some passes, but has massive potential and will be a welcome addition to the Browns, who are in need of some new offensive players.

As we mentioned before, the Browns are the biggest 2017 Super Bowl underdogs this year. They can certinaly change that narrative with players like Myles Garret and David Njoku, but they’re facing an uphill battle heading into the 2017 season.

To find a full list of 2017 NFL betting odds, head to Intertops. It’s here that you’ll be able to see the new team odds with the additions of the exciting NFL prospects you can bet on.