Tuivasa vs Lewis Betting Odds – It’s Not Going The Distance 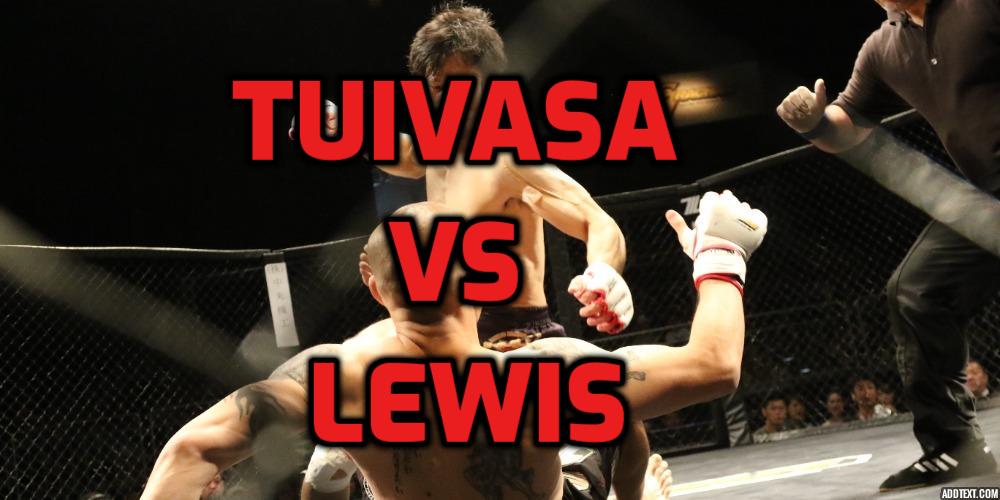 Tuivasa vs Lewis betting odds and early prediction all agree that this fight will not go the full distance. Both mixed martial artists are excellent strikers with the ability to shut each other’s lights off. Lewis is without a doubt one of the most powerful strikers in the history of the UFC. On the other hand, Tuivasa is more technical in setting traps to catch his opponents. This will be an interesting match-up as both will have to be extremely careful when closing the distance inside the octagon. Fans and bookies are in agreement on who holds the advantage going into this bout, but anything can happen on fight night.

The likelihood for any heavyweight fight to go the full distance is relatively small. However, such a possibility almost goes to zero when Derrick Lewis steps inside the octagon. The American mixed martial artist is one of the scariest fighters to compete against. Lewis is arguably the most powerful puncher in the history of mixed martial arts. Currently, “The Black Beast” holds the record for the most knockouts in the history of the UFC at 13.

Having such superhuman punching power, he always goes out to take out his opponents as soon as possible. However, some criticized him for being a one-dimensional fighter with no other backup plan to rely on. As a result, he sometimes struggled to get a win when he is unable to close the distance and land a clean shot. Regardless of that, do not expect him to suddenly change his fighting style for his upcoming bout. Be sure that the 36-year-old will be looking for that clean hit as soon as the bell rings. With that in mind, let us explore his winning chances based on the Tuivasa vs Lewis betting odds.

A roller coaster ride would be the most accurate expression to describe Tai Tuivasa’s career in the UFC. The Australian mixed martial artist had an excellent start with the organization after racking a 3-fight win streak. However, Tuivasa hit a rough patch and lost his next three which put his future in the UFC in jeopardy.

As a result, the 28-year-old decided to take some time off and worked on elevating his skillset. Looking back at this decision, it was certainly the right one to make. Currently, Tuivasa is on a 4-fight wins streak, and a victory over Lewis will put him in the mix of title contention. Therefore, he will be looking to keep the momentum going to get closer to that title shot. With that in mind, Tuivasa vs Lewis betting odds and predictions reveal that he has one big obstacle to overcome.

Looking at this match-up, you can almost guarantee that it will not go the distance. Both fighters are strikers who prefer standing in the middle of the octagon to trade punches. Therefore, with the power that both men carry in their hands, the bout will most likely end with KO or TKO. Although Tuivasa is the more technical striker, he can never match the power that Lewis possesses. With that in mind, early predictions on tapology reveal that the MMA community believes that Lewis will get the win.

The numbers showed that 75% predict a KO win for “The Black Beast”, while only 25% voted in favor of the Australian mixed martial artist. However, anything can happen inside the octagon as all it takes is one punch from either of them to shut the other’s lights off. Taking that into consideration, bookies have published their Tuivasa vs Lewis betting odds.

With the due date of the bout nearing, anticipation on how the fight will play out is rising. It is difficult to accurately predict the outcome as one punch can change the course of this bout. With that in mind, bookies and online sportsbook sites in the United States have published their Tuivasa vs Lewis betting odds. Certainly, there is a general agreement that “The Black Beast” holds the advantage going into this fight which is evident by the polls and odds. For example, 22BET Sportsbook has Lewis open as the favorite to walk away with the victory and he opens with odds at 1.588. On the other hand, Tuivasa opens as the underdog with betting odds at 2.45. Do you agree with the general opinion within the MMA community? And who will you pick when making your betting prediction?