Wilder vs Breazeale Predictions: Breazeale to Pose a Threat if Using Fury’s Tactics 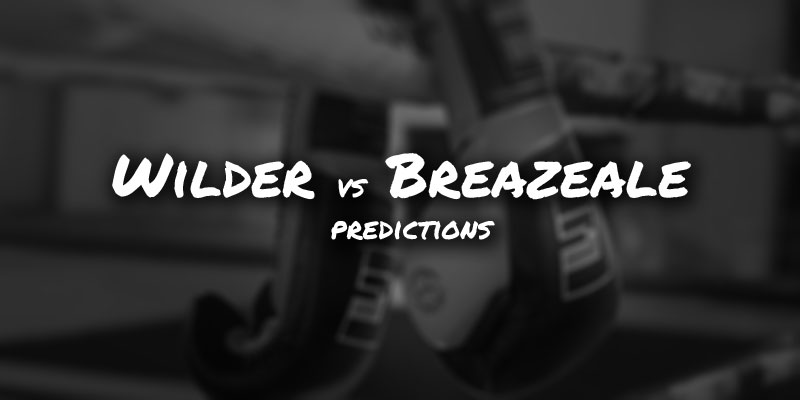 The undefeated WBC heavyweight champion Deontay Wilder will defend his title against the mandatory challenger Dominic Breazeale. The fight will take place on May 18 at the Barclay Center in New York. Wilder vs Breazeale predictions put Wilder clearly out in-front. However, Breazeale can pose a real threat if he uses some of Fury’s tactics.

The American rivals are finally set to meet after two years of trash talk. Their fight might not be the one that fans were asking for. A rematch between Wilder and Fury was the anticipated fight. Thus, since the rematch has been postponed, Wilder vs Breazeale is the best we can hope for. Wilder and Breazeale have combined 57 knockouts in 62 pro bouts. They stand at 6-foot-7 inches tall. In addition, they are both true knockout artists.

Online sportsbook sites in the US predict Wilder vs Breazeale to be an exciting fight. The fans will be on their feet from the first round until a KO is produced. Wilder’s big right hand will be all over Breazeale from the early rounds. However, should Breazeale start fast and tactical, he can shape his own destiny by challenging Wilder.

Wilder has no fear of Breazeale

Doentay Wilder “The Bronze Bomber” holds a record of 40-0-1, with 39 KOs. He will defend his WBC belt for the ninth time when he faces Dominic Breazeale. Wilder, 33, is coming off a thrilling battle with Tyson Fury that resulted in a split draw on last December. After that draw Wilder has lost some of his reputation. In order to win it back, he needs to prove that he still can produce the infamous artillery.

Wilder has only gone the distance twice in his career. He won the WBC against Bermaine Stiverne in January 2015. Since then he has been very active, scoring two knockouts every year. Wilder seems to have no fear of Breazeale. That means he will be throwing his big right hand in early rounds. Should that happen, the fight will end with a KO sooner than later. The odds are -455 at Unibet Sportsbook, for a KO to Wilder.

Dominic Breazeale (20-1, 18 KOs) will challenge Wilder after  winning three straight fights by knockout. He earned the position of a mandatory challenger to Wilder with a win over Eric Molina a year ago. The only time Breazeale lost is in the seventh round by a knockout to Anthony Joshua in 2016. Breazeale hopes to defeat Wilder, so he can fight Joshua for big money rematch.

Online sportsbook news in the US suggest that the records of both boxers show how big a surprise it would be if this fight ends for Breazeale. However, predicting Wilder vs Breazeale to end with a victory for Breazeale depends on how far Breazeale learns from Fury. If Breazeale uses Fury’s tactical superiority in foot and head work he might have a shot with +325.

If you are looking for best bookmakers, look no further and check our review about Unibet Sportsbook.