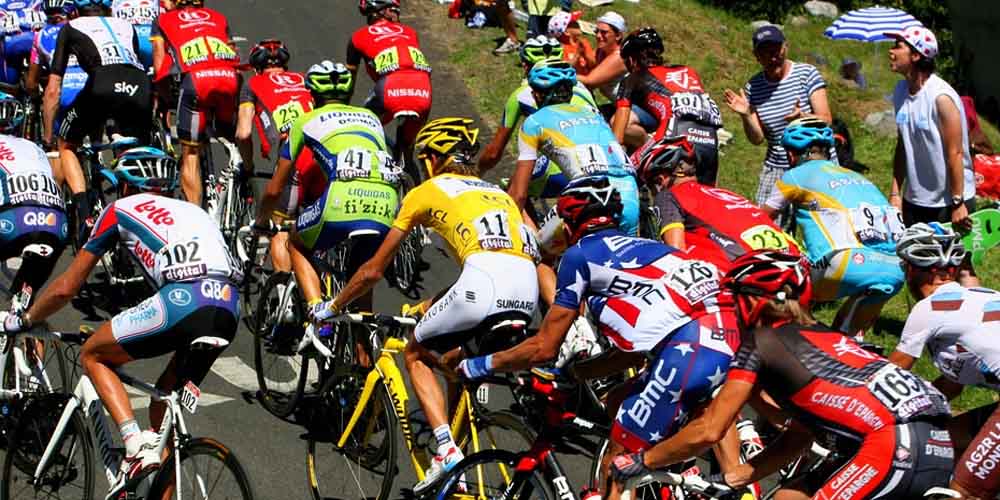 Cycling like many other sports has its own dangers. Like crashing out at the speed of 80kph coming down from a mountain or sprinting in the finish line. It can happen to the best riders in literally any race as we can sadly see an example of it on this week’s Tour of Poland. In the worst crashes in Tour de France history, we can find cyclists colliding with dogs, fans, and even a policeman.

There are some truly memorable events in the history of the biggest cycling race, the Tour de France. Like the victories on Mount Ventoux, great breakaways and tight sprint finishes. The greatest riders of all time have all raced and won the Tour. Including Eddy Merckx, Bernard Hinault, Miguel Hindurain, or Chris Froome. But even they got into crashes and incidents caused by careless fans, high speed or too tight finish.

List of the worst crashes in Tour de France history

In 2003, Lance Armstrong tried to win his fifth Tour de France but it became one of his tightest races. There were only 18 seconds between the top three riders, Armstrong, Jan Ullrich, and Alexander Vinokourov before the last mountain stage in the Pyrenees. Armstrong was leading on the climb when a fan’s yellow plastic bag snagged his handlebar causing him to fall. Incredibly the American still managed to win the stage after with almost a minute advantage. It’s a shame his victory was annulled and all his performances lost their credibility.

In the same year, another incident happened with Armstrong, this time with Joseba Beloki in the center. The Spanish rider was descending from Cote de La Rochette when his rear tire came off the wheel after it hit a melted road tar. Armstrong was just behind him and had to run into a field to avoid hitting Beloki who was lying on the road. The poor guy broke his elbow, femur, and wrist and only returned back to racing in the following year. But he could never race in the level he did before.

Accidents can happen even at the very end of a stage as it did with  Italian Giuseppe Guerini. He ran into a photographer near the top of Alpe d’Huez when he was close to winning the stage on one of the most iconic climbs. He was knocked off from his bike but he was lucky enough to get back on his bike and still finish ahead of everyone else. Surely it was one of his most memorable victories. Even though he also got two podium-finishes in the overall ranking of the 1997 and 1998 Giro d’Italia.

One of the worst crashes happened to French rider Laurent Jalabert in 1994 during a sprint finish. He and several other riders crashed into a policeman who was standing along with the barriers for crowd control. But he made a step ahead to take a photo and caused a massive crash. Jalabert broke his teeth, fractured his cheekbones, and broke his clavicle. The favorite of the French fans won the green jersey in the following year but the accident made him change his riding style. He became an all-around rider instead of only focusing on more dangerous sprints. Online gambling sites in France are hoping for a good result from another French rider, Thibaut Pinot in this year’s Tour de France, according to the 1xBET Sportsbook.

In another unexpected event in the Tour’s history, a dog walked in front of the riders during a stage in 2010. German rider Marcus Burghardt ran straight into the golden retriever and almost fell on him. Luckily both the dog and the rider were unharmed, only his bike suffered major injuries. There was another dog incident in 2013. Then a small white dog escaped from his owner and ran into the road, just ahead of the fast-approaching peloton. Both his owner and the dog stepped back just in time to avoid collision with dozens of riders.

Incidents can happen with the best riders as well, as we could see from 5-time Tour de France winner Bernard Hinault’s example. He was riding in the yellow journey towards his fifth title when he suffered a big crash on Stage 14. In the collision, he broke his nose but after receiving medical assistance he still managed to pedal through the finish line. Doing this he kept his chance to win the tour. Which he actually did in spite of having breathing difficulties in the rest of the race. Online sportsbooks in France are giving the smallest odds, 2.55 for the victory of last year’s surprise winner, Egan Bernal.  While the odds of four-time Tour de France winner Chris Froome is 8.00 to get his fifth title.

One of the scariest moments in the history of Tour de France was Jens Voight’s fall just ahead of a motorcycle in 2009. The German rider was descending the Col du Petit-Saint-Bernard with 96 kph when he hit a bump.  It sent him face over the handlebars, landing him on the asphalt. Luckily the motor rider just behind him with a fantastic reflex managed to bypass him.  But Voigt still suffered serious injuries, a fractured cheekbone, and a concussion. He had to give up the race and skip other races in order to recover.