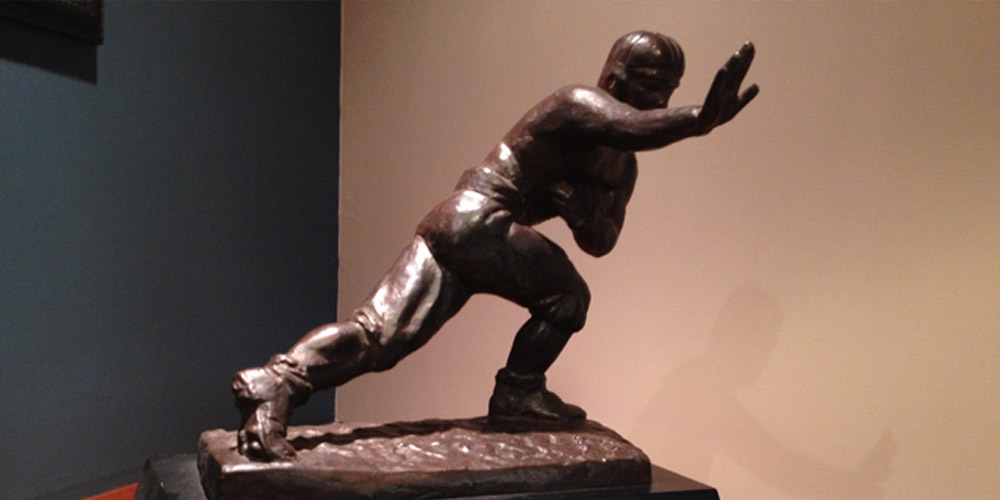 Even though it might be a little early to get the Heisman Trophy odds 2020, the online betting sites in the US have already started gearing up the betting lines. Joe Burrow can’t win the award back-to-back this year. Tua Tagovailoa has suffered from a season-ending injury and lost his shot at the Heisman. Ohio State is struggling to get out of the Urban Meyer era with its new coach Ryan Day. The early odds are rarely 100 percent right, but it will give you an idea about the players’ shapes. In order to find out more about Heisman Trophy odds 2020, it’s best to start as early as possible.

Joe Burrow form Lousiana State University was selected as the best-performing college football player last year.  He has even created a new record in the history of Heisman by getting the highest percentage of first-place votes. Out of the ballots emailed to almost thousand candidates including media and previous winners, he had an outstanding 2608 points. His fellow competitors all got under 800 points. Jalen Hurts of Oklahoma, Ohio State quarterback Justin Fields and defensive and Chase Young were placed second and third places. All of the odds below are according to the Unibet sportsbook. You can read the review about Unibet from here.

Only at 20 years, Trevor Lawrence has won almost all of the college football awards. A handful of experts call him a “once in a generation” player. He’s one of the most high-rated quarterbacks ever. With him returning to the Clemson Tigers this year, the team is hoping for a grasp at the championship. Trevor has winning odds of +500 at Unibet sportsbook.

In order to cement his place as a favorite in the Heisman Trophy odds 2020, Trevor needs to win the championship. If he continues his impressive record of losing only one game in his professional career, the Tigers are most likely to win this season.

However, he was eliminated from the last year’s Heisman Trophy only because his interception total was up. That’s because Clemson Tigers focus on the team’s performance as a total rather than any player’s records. He simply hasn’t had a chance to get pretty numbers and impressive solo moments because of this. For a prestigious award as Heisman Trophy, these are the most important features.

Despite all this, he’s at the top of the Heisman Trophy odds this year and is likely to keep so. If you’re thinking about betting, you should definitely keep an eye on him. Especially the game at the Notre-Dame will be crucial for his record.

Justin Fields is likely to be nominated for the second year

As mentioned before, since the majority of the votes for the award comes from the media, it’s important for the players to be popular. Justin Fields has managed to do just that. He’s the quarterback of the Ohio State Buckeyes, a team with pretty steady performance.

He was a sensation when he transferred from Georgia to Ohio State and has had an impressive season. It was probably not easy for the Buckeyes to get into the Big Ten again in 2019 with a new quarterback and a new coach. Fields has managed to get the team’s chemistry up and have an astounding season with a 13-1 record.

Maybe he was not a Heisman favorite last year because it was his first season in the Buckeyes. Once again, Heisman is a prestigious award that focuses on popularity and tradition. This year, Fields has the odds of +350 in Unibet of taking the award home.

Other favorites of the Heisman Trophy 2020 odds

Spencer Rattler has a pretty good shot at the Heisman(+1200 according to Unibet), despite the fact that it’s only his freshman year. He was in the Netflix series “QB1: Beyond the lights”. He has talked about his suspension during the senior year. Even though there are numerous rumors that put him in a bad light, he has decided not to uncover the reason for the suspension. When asked about his new quarterback Oklahoma University coach Lincoln Riley answered that he has “zero concern” for this.